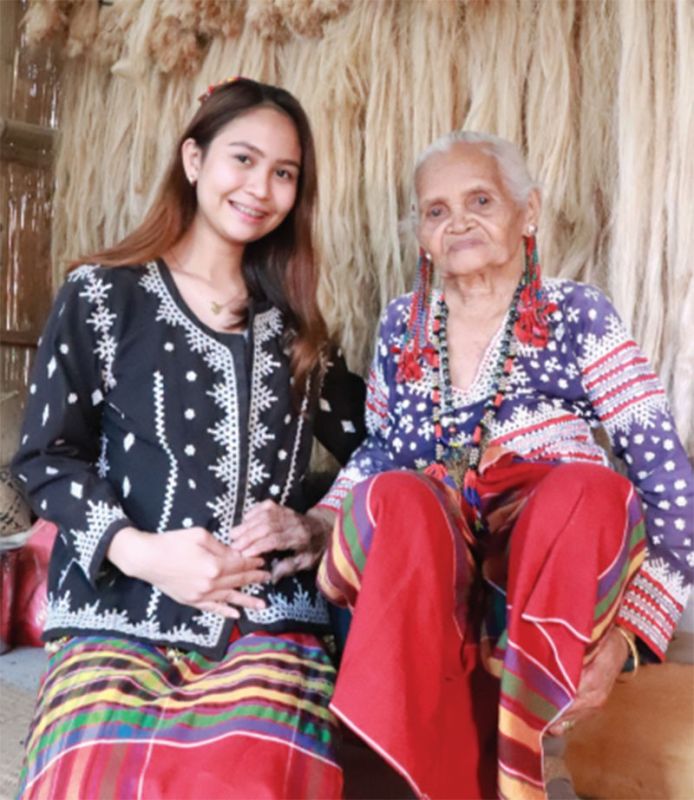 I USUALLY feel “kilig” or giddy from handsome guys and actors. That was normal with all the teenage hormones. I just didn’t expect to feel that kilig from a woman who was over 100 years old.

And yes, I did feel giddy as she poured her attention on me.

Bai Yabing Dulo Masalon also known as Fu Ya Bing, is a national living treasure who has received awards for teaching the B’laan weaving tradition. To meet her was a once in a lifetime opportunity. Going to her place was already a struggle as we were lost countless times.

As we went inside her house, I got kind of shy as she was looking at me the whole time. Some of my classmates were already complaining about why she was looking at only one direction- me. They wanted to get a nice angle for Fu Ya Bing’s photograph.

I kept on smiling because I didn’t know what she wanted or what she thought of me.

During the interview, she suddenly stood up. While walking to her artworks, I observed signs of aging in her. She walked slowly- her back hunched and her eyes blue from cataracts.

I was surprised. Of all my seven classmates, the national living treasure chose me.

She first took a magnificent hair comb designed with colorful beads and put it on my hair. Its beads hung freely from the top of my head down to my shoulders. I thought that was it- maybe she just wanted to see the comb on my hair, but she continued. She handed me a striped skirt and pointed to hers. She signaled that she wanted me to wear it the way she wore hers.

Next, Fu took an intricately designed belt. It had small bells that jingled when I move. Lastly, she chose the most unique top on the rack and pointed at it while looking at me. I wore it. My heart beat faster than the last time a guy confessed to me.

Fu reminded me of my great grandmother who passed away. I used to call her “Ya-ya”. They have a similar body structure and they both live in the mountains- also from Cotabato.

I missed the feeling of having a grandmother.

Fu told me to sit beside her, so I did. She brushed my hair with her fingertips. It was as if my grandmother’s soul went to hers. Without a doubt, I could feel a grandmother’s love.

She pointed at my classmates and signaled that she wanted them to take a picture of us. She was bending her index finger back and forth, symbolizing the clicking of a camera. I thought it was cute. I could imagine my grandmother doing the same thing. Before passing away, she was the most curious person I knew. She would turn a modern camera in her hands, wondering how the tiny device could take such accurate pictures.

I didn’t want to leave. However, we had to. As we went back to the vans, I waved goodbye and smiled at her for the longest time.

Never did I know that I would feel that certain sensation from someone whom I just met. It was something that I wouldn’t imagine myself feeling to someone who was over 100 years old. I thought I would only get to feel it with my crush or someone I considered my Valentine date.

I may not have had a Valentine’s date this year, but my encounter with Fu Ya Bing was already more than enough. February is indeed a month of kilig. (Claire Yvonne Aznar, AdDU Mass Communication intern)