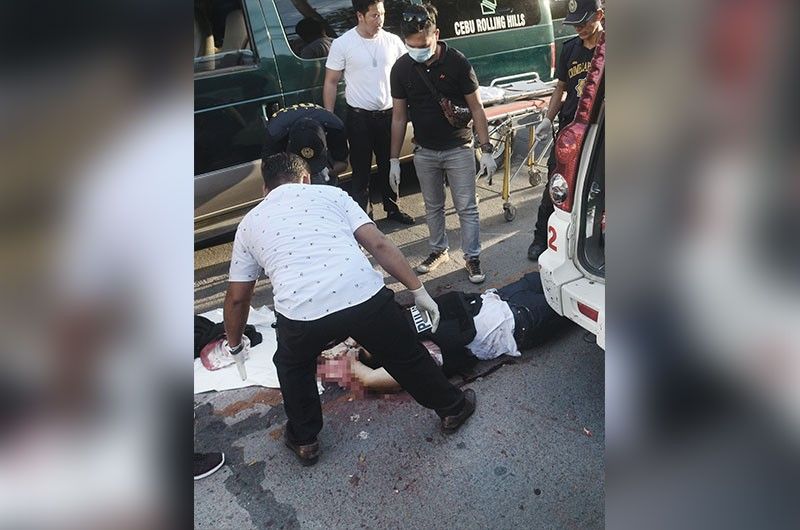 OVERKILL? When members of the Scene of the Crime Operation arrived, they found several gunshot wounds in Clarin, Misamis Occidental Mayor David Navarro’s body, including two in the head, one in the shoulder and two in the arms. (SunStar Photo/Alan Tangcawan)

THE family of slain Clarin, Misamis Occidental Mayor David Navarro has a suspect in mind.

During the press conference held by Cebu City Police Office (CCPO) Director Colonel Gemma Vinluan on Saturday, Oct. 26, she revealed that the mayor’s family believes an organized criminal group based in Ozamiz City was behind the killing.

However, Vinluan did not give additional details, saying Navarro was forced to increase security at the Municipal Hall in Clarin after receiving death threats from the group.

“As for now, I will not reveal the group’s name,” she said in Tagalog.

The CCPO has formed a Special Investigation Task Group that will be composed of members of the City Intelligence Branch, Criminal Investigation and Detection Group 7, Guadalupe Police Station, PNP Crime Laboratory, Regional Intelligence Operating Unit and the Regional Legal Division 7 to concentrate on the case.

Vinluan will be its ground commander, while Police Colonel Geovanie Maines, the newly appointed deputy regional director for operation, will be the group’s supervisor.

The police are looking at several motives behind the killing, including political, business, personal and illegal drugs.

According to Vinluan, Navarro was eighth on President Rodrigo Duterte’s list of high-value targets involved in the illegal drug trade.

The police official has directed her personnel to get the statements of the witnesses, especially the people inside the patrol car with the victim and the passengers of the white van behind it.

Four persons were hurt during the ambush: Police Corporal Eutemio Catalan of the Abellana Police Station, the driver of the patrol car; Police Chief Master Sergeant Roberto Sanoy, who is assigned at the Clarin Police Station; John Baylon, Clarin’s municipal administrator; and a still unidentified person.

Vinluan said one of them is in critical condition in a private hospital in Cebu City.

The passengers of the van behind the patrol car were identified as a certain Johnny; Beneto Johnson and Christopher Ramayrat, consultants of the mayor; Baylon; lawyer Marcelian Tapayan; Clarin Councilor Remor Lomolio; Sanoy; and “Tambok,” a reporter of a radio station in San Carlos City, Negros Oriental.

Members of the Scene of the Crime Operation found several gunshot wounds in Navarro’s lifeless body, including two in the head, one in the shoulder and two in the arms.

A reliable source from Camp Crame told Superbalita Cebu that Navarro was in Cebu City to help the suspected robbers who were arrested after robbing three jewelry shops, a money changer and a pawnshop inside the J Centre Mall on A.S. Fortuna St. in Mandaue City last Saturday, Oct. 19.

Navarro was identified as the leader of the Alferez Robbery Group that had targeted banks around the country.

The source, who used to be assigned in Central Visayas, said the mayor continued to finance the group.

“During our monitoring, we discovered that Navarro continued to finance the group even after he became mayor of Clarin. The information we gathered is that Navarro came to Cebu to help members of the group who were arrested in Cebu City,” the source said in Cebuano. (from AYB of Superbalita Cebu/PJB)