Rituals, superstitions and one big picnic for the dead 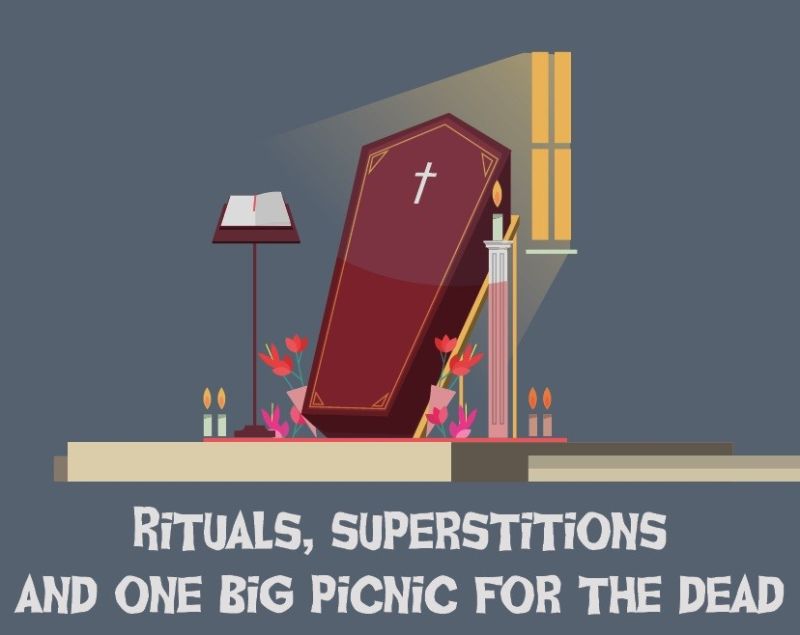 DEATH is a familiar occurrence to most of us. There are deaths in the family, among our friends, among our associates. And as any bereaved person would do, the first thing he would do is to arrange for the burial, for which there are things that must be done: Get a death certificate. Get a space in a funeral parlor. Arrange for the kind of burial, be it in a cemetery plot or in a columbarium after cremation.

Then there are other concerns to attend to. If a Catholic, will there be novenas and/or Masses for the dead? During the wake and burial, what kind of refreshments will there be?

And then there are customs/traditions one associates with the mourning for the dead, which well-meaning relatives and friends remind us of.

First, the mourning clothes. Will one wear black for a year of mourning? Or will one wear white instead? And yes, for Catholics, a rosary is usually put in the hands of the dead person.

But then there are a number of superstitions. According to some, one must make sure the rosary is broken before the person gets buried to ensure that no other death in the family would follow soon. Some suggest that a pair of shoes should be placed on top of the person’s coffin... perhaps for the dead’s “journey.”

There are lot of other superstitions that come to mind, especially during a wake. In the past, the yard in the home of the dead person must not be swept for 40 days, so that if the dead person comes back, his footsteps can be seen on the ground. In olden times too, there was a mandatory ritual where one has to pass through a smoking pyre before leaving the cemetery. There is also the injunction not to go from one wake immediately to another. Some are stricter—once one has attended a wake, he must not visit any other wake until after the person in the first wake visited is buried.

A curious ritual for some is for relatives to pass under the coffin of the dead as it is transferred from the funeral parlor to the funeral car, with the injunction that one must not look back after passing through. This is to make sure there is no chain of deaths in the family. Another family with a succession of deaths decided to throw away the mourning clothes to break the bad luck of the cycle of successive deaths.

Another belief is that a person’s personal effects should not be given away until after a year has passed... perhaps in the hope that the dead person is coming back to life?

The one mandate that seems hard to follow is not thanking people who come to the wake to condole with the bereaved, or those who send flowers, mass cards or some donation for the funeral expenses. How could one not say thank you? Perhaps, whoever thought of this superstition must have thought that when the bereaved one says “thank you,” the dead person will hear and think that one is thankful that he is dead?

As for visiting the dead in his final resting place, the custom of some is to bring his favorite food or drink there, to be shared with the spirit of the dead. No wonder All Saints’ Day and All Souls’ Day can seem to be one huge picnic in the cemeteries in this part of the world.

Whatever one believes in, there’s nothing like praying for the repose of the soul of the dead.