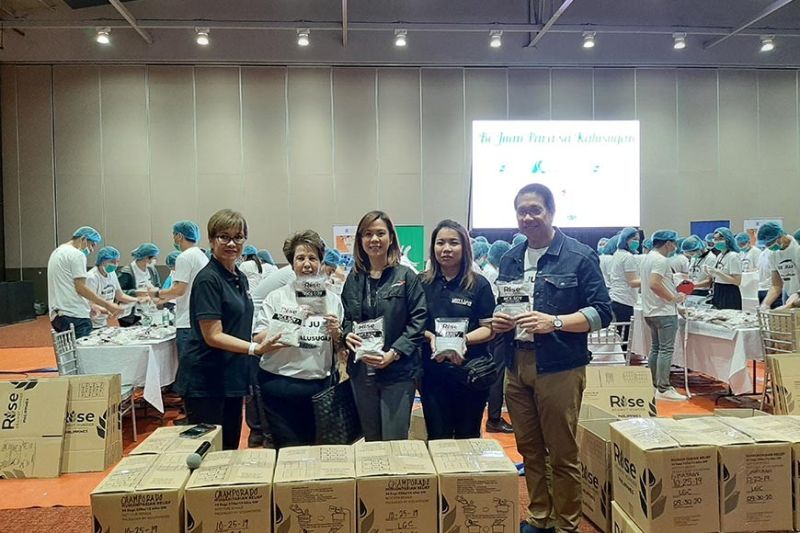 CITY OF SAN FERNANDO -- The Laus Group of Companies (LGC) and Ayala Group has joined hands with international non-profit organization Rise Against Hunger to address malnutrition in the province.

LGC, through its Levy P. Laus (LPL) Foundation, Incorporated had at least 40 volunteers while Ayala Group sent some 60 employees to help in the preparation of food packs at the Laus Group Event Centre on Friday.

According to Rise Against Hunger Philippines Deputy Executive Director Gina Virtusio, the group targets to pack at least 7,500 meals during the whole-day activity.

Each 400-gram fortified meal pack contains rice, soy, dried vegetables or fruits, mineral sachet and flavored with either ginataan, chocolate, beef or chicken, and can feed about 12 to 15 children, Virtusio said.

“The food packs are special because it does not only address the feeling of hunger in the tummy, but also provides the vitamins and minerals needed by the child's body. Through the bayanihan we are having now, we can feed the beneficiaries a single meal for at least six months,” Virtusio disclosed.

LGC Chairman and Chief Executive Officer Lisset Laus-Velasco, for her part, said that the partnership between the organizations came from the common vision of helping needy communities in the province.

“The LPL Foundation, through the vision of my father, Levy P. Laus, has been helping Kapampangan families send their children to school and this time, we thought of expanding our assistance by giving them stronger foundation through a healthy mind and body at their onset days,” she said.

By giving children healthy meals, Laus-Velasco said they will become more active and focused in their schooling, and can better absorb the information fed to them in school.

Laus-Velasco, meanwhile, disclosed that the activity is just the start of the strong partnership with Rise Against Hunger and Ayala Group towards the goal of ending hunger by 2030.

“We already have the vision so all we need to do now is join hands and be together in ensuring that we can achieve our goal to stop hunger in the next decade, and start developing our communities in the countryside just as how the late Levy P. Laus have envisioned it,” she said.