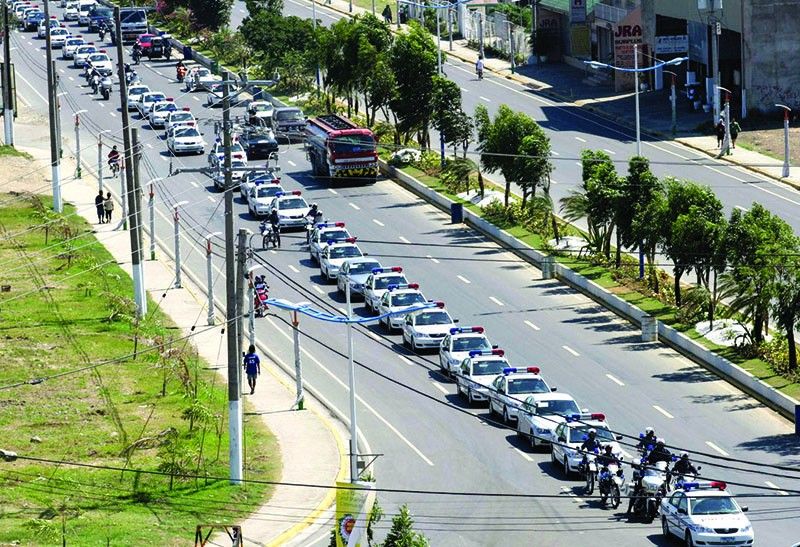 In this photo taken on December 2, 2006, Mandaue City simulates convoy of vehicles carrying “Asean delegates”. The lampposts are on the sidewalk. (File Photo)

CEBU (Updated with correctionn) -- The Sandiganbayan has dropped the graft charges against the late Mandaue City mayor Thadeo Ouano and a former DPWH official, and acquitted 11 other respondents who were accused of corruption in the purchase of “overpriced” lampposts back in 2007.

The anti-graft court did not find proof beyond reasonable doubt to support the charges that the Mandaue City public officials and certain private individuals connived to buy the lampposts.

The graft charges, filed in 2007, stemmed from the procurement of supply and installation of street lighting facilities of 89 sets of decorative lamp assembly costing P50,000 per set from Fabmik Construction and Equipment Supply Company Inc. for a total of P19,980,000.

These streets were part of the route that delegates of the 12th Association of Southeast Asian Nations (Asean) Summit traversed from January 9 to 15, 2009.

The lampposts were said to have been overpriced by P6.13 million, which was beyond the 10 percent price variance allowed by the Commission on Audit (COA).

Their respective bail bonds were ordered returned and the hold-departure orders issued against them lifted.

The charges against Ouano and Restituto Diano, then the administration division chief of the Department of Public Works and Highways (DPWH), were dismissed by reason of death.

The Sandiganbayan anchored its ruling on three elements:

1. The accused must be a public officer discharging administrative, judicial or official functions.

2. He must have acted with manifest partiality, evident bad faith, or inexcusable negligence.

3. That his action caused any undue injury to any party, including the government, or giving any private party unwarranted benefits, advantage or preference in the discharge of his functions.

The Sandigan said there was no dispute in the first element.

The negotiated procurement of the lampposts and the allocation of the budget for it were made by the DPWH Central Office through then acting Secretary Hermogenes Ebdane Jr., not by the accused.

The accused did not exercise discretion as to the budget and mode of procurement, the Sandigan said.

Also, the prosecution failed to prove beyond reasonable doubt that Braza, president of Fabmik, had exerted influence on any public officer, or that he colluded with any of the other accused just so his company appeared as the winning bidder.

On whether the lampposts were overpriced, the Sandigan pointed out that the canvassing of the item was done in Quezon City and not in Mandaue City where the project was undertaken.

It also did not consider the actual fabrication costs and “the fact that the items were not exactly the same as those used by Fabmik.”

“Ramson Lighting Inc., a company based in Quezon City, only provided the same post but not the exact street lamp provided by Fabmik.”

“Witness Nilo Confessor, the technical audit specialist who made the COA estimate, admitted that he based his findings on the original plan submitted to him rather than the as-built plan of Fabmik.

“This is important, considering that the original plan stated that the project was to be completed after 40 days, but he still used the said period as basis for his assessment although he knew that the contract between Fabmik and DPWH indicated 10 days due to time constraints.”

“Thus, in the cost estimate that he made he excluded items indicated by the contractor which allowed it to finish the project in an abbreviated period. Logically, if the deletions were not made, the COA’s cost estimation would be higher, and possibly more in line with the actual project cost.”

“When we were informed of the decision of the Sandiganbayan yesterday, we were overwhelmed with happiness. Even though our father is not here with us to hear his name cleared, we are very grateful of the verdict,” Jonkie said.

He hopes that with the verdict, the Mandauehanons will remember his father as a good man.

Ouano-Dizon said: “Finally, justice has spoken. Papa Ted is vindicated of all the insinuations and doubts about that controversy. I would have wished Papa Ted were still alive today to hear the good news himself. But, it is enough for us to be consoled by the fact that he left a legacy of a good name.”

Another set of lampposts had aligned the streets of Lapu-Lapu City, one of the Asean summit venue hosts. Separate charged had been filed against then Lapu-Lapu City mayor Arturo Radaza.

The lampposts have long been removed because the lamps had become busted. (MPS, RTF, KFD)

ERRATUM: In our story on the acquittal of 11 individuals in the lamppost purchase published Monday, October 28, 2019, we reported that former Lapu-Lapu City mayor and now Congresswoman Paz Radaza was involved in a similar purchase. We apologize to Rep. Paz Radaza for dragging her into the story. It was her husband, Arturo Radaza, who was the Lapu-Lapu City mayor at the time of the purchase in 2007. -- Editors