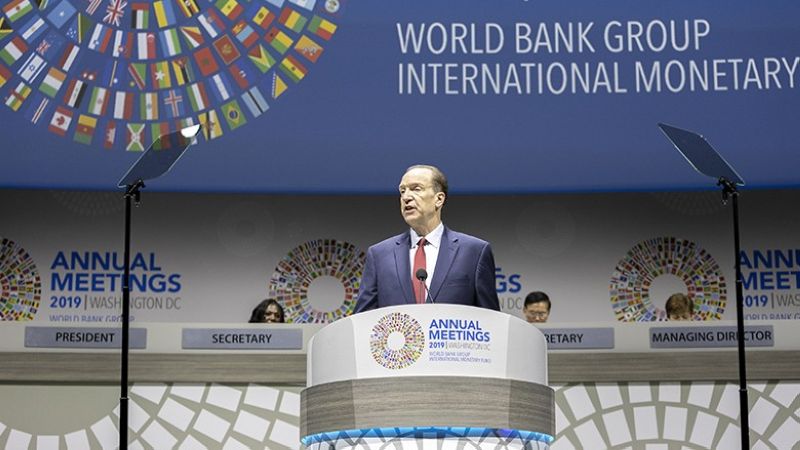 MEETING. World Bank Group President David Malpass speaks at the plenary session of the Annual Meetings of the Board of Governors in Washington DC, USA. (World Bank)

THE World Bank is encouraging innovations using digital technology to expand financial inclusion in the Philippines, the head of this multilateral institution said.

In a meeting with Finance Secretary Carlos Dominguez III in Washington DC, World Bank President David Malpass said the Philippines’ robust economy offers many opportunities for the government to “reguide” its digitalization efforts to empower Filipinos.

He commended the Philippines’ efforts to kickstart its digitalization program with the passage of a National Identification (ID) Law that aims to unify and streamline an identification system for all Filipino citizens.

Malpass said the use of new technologies, particularly digital currency and remittances, “can open new avenues” for marginalized sectors to participate in the economy. He said this is why the World Bank is now studying how these innovations can directly benefit people while encouraging them to avail themselves of state-provided social services, such as healthcare.

“This is an opportunity because you have so many things going on where you can reguide the program,” Malpass said during his recent meeting with Secretary Dominguez at the World Bank headquarters here.

Dominguez welcomed Malpass’ support for digitalization as a way to expand financial inclusion in developing economies.

He told Malpass that the Philippine government has long been implementing a conditional cash transfer (CCT) program, in which the lowest-income households in the country receive cash grants on condition that they fulfill certain conditions, such as ensuring that their children go to school or that pregnant mothers get regular medical checkups.

This CCT program “has worked pretty well” because of the assistance extended by the World Bank and the Asian Development Bank (ADB) to the government, Dominguez said.

Dominguez said the passage of a national ID Law, which will be implemented on a pilot basis starting the first quarter of next year, will significantly improve the delivery of the CCT program.

“That’s all good,”Malpass said on learning from Dominguez the Philippines’ efforts to digitalize its government services.

According to World Bank country director for the Philippines Mara Warwick, the multilateral institution is providing technical assistance to the Philippines for the rollout of its national ID system.

Dominguez said the World Bank can assist in the Duterte administration’s ongoing efforts to help the new Bangsamoro autonomous region in Muslim Mindanao (BARMM) set up its government and adopt the best practices of other independent political entities in other parts of the world that have successfully set up and effectively run their regional governments.

In response, Malpass said the World Bank “would like to work on that.” Malpass also said during the meeting that the World Bank’s coordination with ADB has now improved following Dominguez’s suggestion to reduce the duplication of efforts between the two institutions and work closely instead in effectively delivering development aid to the region.

Dominguez further suggested that the World Bank modify its timeline in coming up with its Country Partnership Framework (CPF) with the Philippines so that the institution’s assistance strategy would be in sync with the entry of each new administration starting in 2022.

The current CPF lasts until 2024, which Secretary Dominguez said should be cut short to 2023, so that a new administration elected in 2022 would have enough time to propose and implement new projects with the World Bank.

During the meeting, Dominguez also briefed Malpass and other World Bank officials on the progress of the Duterte administration’s tax reform and infrastructure modernization programs, and the country’s steadily rosy prospects for growth this year amid the global economic slowdown. (PR)