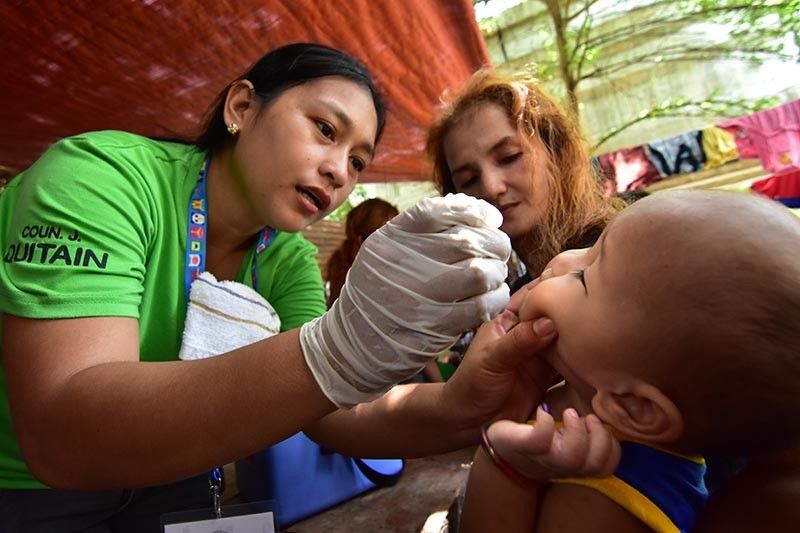 The figure was based on the consolidated oral polio vaccine (OPV) report of the City Health Office (CHO) from October 14 to 27, the duration of the "round zero" of the mass vaccination.

Aside from the barangay health centers and house-to-house visits, the allocation of the oral polio vaccine type 2 (OPV2) to children were also conducted in selected hospitals, churches, and schools, which helped in the wider coverage.

CHO technical division chief Julinda Acosta said while she said they are still awaiting for other health centers to submit their official report, she said they are not expecting it to reach a target of 100 percent coverage in the city.

She said, though, that the data is already a manifestation of a positive response despite hesitation from some parents.

"We cannot really attain the 100 percent because they were those kids who got sick and admitted to the hospital during the vaccination round," Acosta said on Monday, October 28.

She said children with high fever, pneumonia, and other severe conditions are not advised to undergo vaccination.

She also said there were still those few people who refused to have their children immunized due to their religious belief and the common misconception of vaccination due to the Dengvaxia scare.

But she said they are only a "few" compared to those recorded in the past years.

She said some health workers reported that parents refused to have their children vaccinated because their respective pediatricians recommended not to have them immunized since they are already "fully immunized."

Acosta said earlier that having a 95-percent reach of the immunization already guarantees the protection of the children from the possible virus infection.

Meanwhile, she said the Department of Health (DOH) gave them until Friday, November 1, to ship back all vaccines, including the unused vaccines and empty vials for disposal and management.

She also reminded that parents must bring their children again in the remaining batches for them to be fully immunized.

Acosta said they will fully monitor the immunization coverage of the city, particularly in the intake of oral polio vaccine type 1 and 3 (OPV1 and OPV3) and inactivated polio vaccine (IPV), after having a low coverage since 2015, the year when the World Health Organization (WHO) declared the Philippines free from the Polio Type 2 (VDP2) virus.

VDP2 was traced in a laboratory study, confirmed by DOH in September this year, wherein its samples were taken at the Davao River near Bolton Bridge.