Duterte prefers Navarro probe handled by NBI, not by police 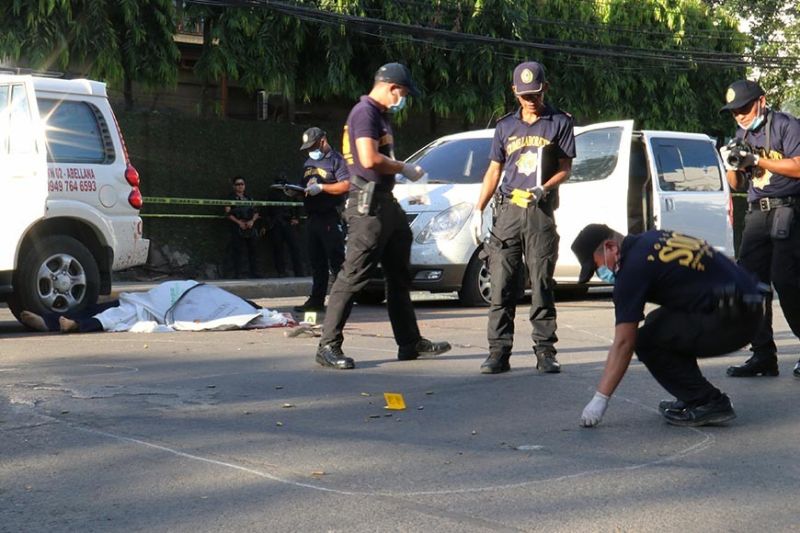 PRESIDENT Rodrigo Duterte on Monday, Oct. 28, 2019, floated the possibility that the police were behind the ambush that killed Clarin, Misamis Occidental Mayor David Navarro.

“To make it really fair, I’d like to order the police to terminate their investigations and hand (these) to the NBI, whatever documents and all proof and evidence they have in their hands,” he said.

One month is more than enough time for the SITG Navarro to gather evidence and “calibrate all information,” de Leon said.

Whether de Leon was aware of the President’s position could not be ascertained yet.

Duterte said he prefers the NBI doing the investigation in the spirit of impartiality.

“Because when that happened, the police were there,” Duterte said in an interview with Malacañang reporters Monday afternoon.

Navarro was in police custody when he was gunned down on Oct. 25, 2019 in Cebu City.

Earlier this month, Navarro met with Duterte to explain his side on the talk on his involvement in illegal drugs. He was in the March 2019 narco list of the President.

In a video interview on Oct. 20 posted on the “Explore Clarin Misamis Occidental” Facebook page, Navarro expressed his gratitude to Duterte and said the subsequent appointment of his brother, Misamis Occidental Board Member Dan Navarro, to the post of Technical Education and Skills Development Authority (Tesda) regional director manifested Duterte’s belief that he was telling the truth.

Navarro said in Bisaya: “The President heard my side, so maybe he saw my being genuine. All the barangays in the town of Clarin are drug-free, drug-cleared. In the record of the Pdea in the region, we have no involvement in drugs. In the record of the PNP, we have no involvement in drugs. That’s the reason we were able to get an audience with the President.”

After his meeting with the President, Navarro said, his brother Dan was appointed to the Tesda.

“If the President had any doubts about our family, he would not have hired (Dan) to join his administration,” the mayor said.

Elsa Navarro, wife of the slain mayor, posted on her Facebook account Sunday, Oct. 27, a screenshot of the last text message she received at 5:07 a.m. from her husband. At this time, Navarro was in detention at the Abellana Police Station.

In his text to Elsa, Navarro sought forgiveness from her and their family. He said the only thing he did was lock the arms of the masseur and that all other allegations about him were untrue.

He said he was being “set up.” He expressed uncertainty about his life in the hands of his police custodians. He asked her to take care of their children and professed his love for her.

He ended his text with “SORRY and Thank You ILOVEYOUVERYMUCH.”

PRO 7 Chief de Leon said the reenactment they conducted last Sunday, Oct. 27, gave the police a glimpse of what could have transpired during the ambush.

De Leon said the narrowness of M. Velez St. would have made it difficult for the driver of the Mahindra patrol car to back up when the killers’ van blocked its path.

A Starex van carrying friends and family of Navarro was a few meters behind the Mahindra.

The situation gave the killers the opportunity to kill Navarro, the PRO 7 chief said.

De Leon said the policemen had tried to fight the killers, but bullets were already raining on them. Firing back would have endangered the lives of everyone with them.

The patrol car of Abellana Police Station Chief Eduard Sanchez was lead in the three-vehicle convoy going to the Cebu City Prosecutor’s Office for an inquest proceeding over a complaint for slight physical injuries filed by a massage parlor attendant.

Five policemen, Navarro’s sister and a family friend were in the Mahindra with the mayor. One of the policemen was the police chief of the town of Clarin. He sat beside the mayor in the row seat. The rest were with the Abellana Police Station.

The Abellana police who were with Navarro are willing to be subjected to an investiation, de Leon said.

Their statements carry substantial information that will guide the SITG Navarro in their investigation, Vinluan said. The SITG Navarro already has the mobile phone of the slain mayor. (SunStar Philippines, AYB, CTL, MPS)