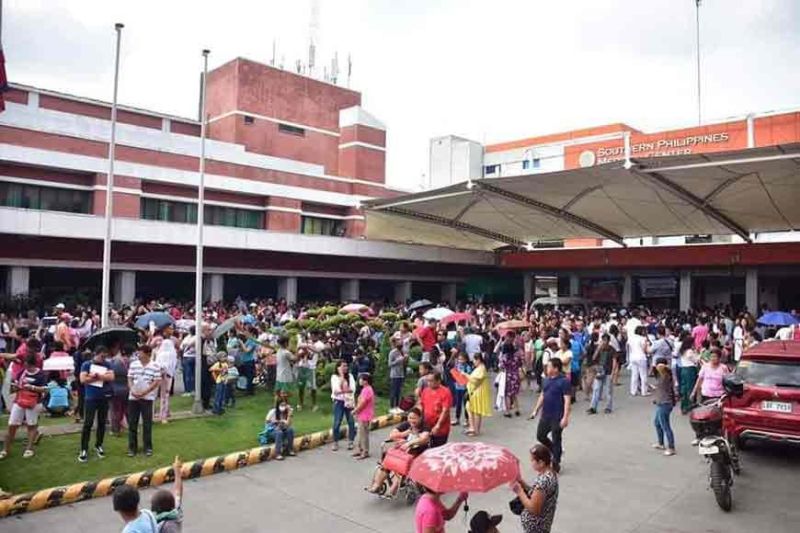 DAVAO. Patients, visitors, employees, and the medical staff of the Southern Philippine Medical Center gather at the open space of the hospital following the magnitude 6.4 earthquake that struck Mindanao around 9 a.m. Tuesday, October 29, 2019. (Macky Lim)

The quake struck at 9:04 a.m. 25 kilometers southeast of Tulunan in Cotabato, the Philippine Institute of Volcanology and Seismology (Phivolcs) said in an advisory.

It was plotted in the same area as the October 16 quake that killed seven people and damaged several structures and infrastructure facilities. The previous tremor, with magnitude of 6.3, was centered 22 kilometers southeast of Tulunan, at a depth of eight kilometers.

Phivolcs said aftershocks and damage to properties are also expected this time, as the tectonic quake was also shallow, with a depth of only seven kilometers.

No tsunami warning has been issued, added Phivolcs.

The quake was felt in Davao City and Cagayan de Oro City, where residents rushed into the streets and open spaces in panic.

Patients, visitors, employees, and the medical staff of the Southern Philippine Medical Center in Davao City went out of the building following the tremor.

Cracks can also be seen at the facade of the Felcris Centrale building along Quezon Boulevard in Davao City. People in the mall have been evacuated.

The Davao City Government has also deployed personnel to check on bridges.

"We will handle bridges inspections and will relay info to CEO. We are doing underneath and surface inspections. No reported pinned down patients per DRRMO OpCen [sic]," the Davao City 911 said in a statement.

The quake also prompted the Davao City Government to suspend classes in all public and private schools — from kindergarten to post-graduate studies — Tuesday, October 29.

Davao City Mayor Sara Duterte-Carpio said the earthquake may have caused structural and electrical damage to buildings and houses, thus the suspension order.

She instructed all school owners, teachers, and other school personnel to commission a qualified engineer to check the structural integrity of all buildings.

"If they find building defects that are dangerous and need repair, they should immediately condemn the area and not allow students to use the same," she said.

She added that the suspension of classes Wednesday, October 30, shall be on a case-to-case basis and shall depend on the individual schools' announcement.

The quake was felt in Cagayan de Oro at intensity 6 and in the province of Misamis Oriental at instrumental intensity 4.

It prompted students, teachers, and guests in Don Restituto Baol Central School in Gingoog City to run to open fields for safety.

Most of the students and teachers came from different schools in Northern Mindanao, as Gingoog City is hosting the Regional Schools Press Conference, a campus journalism competition.

The local disaster risk reduction and management council already deployed personnel, including an ambulance, in case of emergencies. The competition will end on October 30.

In Cagayan de Oro City, employees of Ayala Centrio Mall on CM Recto Avenue were evacuated, as cracks were reported.

Phivolcs said the quake was felt at intensity 7 in Tulunan and Makilala in Cotabato; Kidapawan City; and Malungon, Sarangani, and intensity 6 in Davao City, Koronadal City and Cagayan de Oro City.

Instrumental intensities were felt in the following areas: