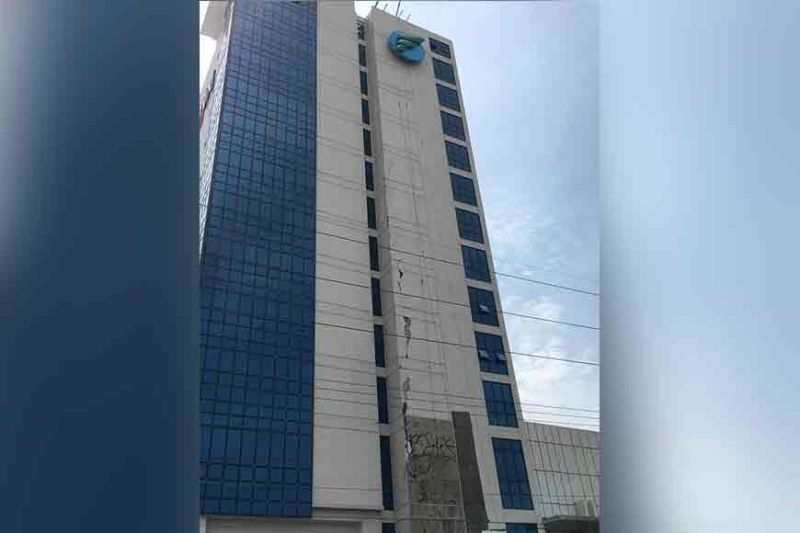 DAVAO. Cracks were noticed on the Felcris Centrale building after the magnitude 6.6 earthquake that was felt at intensity 6 in Davao City on October 29, 2019. (Photo by Rob Gumba/SunStar Davao)

DABAWENYOS rushed out of buildings and sought safety in open spaces after a powerful tectonic earthquake, which was felt at intensity 6 in Davao City, struck near Tulunan, Cotabato for the second time in two weeks.

The Philippine Institute of Volcanology and Seismology (Phivolcs) said the quake had a magnitude of 6.6 and a depth of only seven kilometers. It was plotted around 25 kilometers southeast of Tulunan, Cotabato at 9:04 a.m. Tuesday, October 29, 2019.

Phivolcs initially reported a magnitude 6.4 earthquake, but revised this to 6.6 in an updated bulletin.

“Meron din kasing pumapasok na data from the field. Intially yung kinuhang data was para makadisseminate ng info sa public (There were information that is coming from the field. Initially, the data was for information dissemination to the public),” Phivolcs-Davao science research assistant Chris Vidad said in a phone interview.

Vidad said the entire island is expected to experience aftershocks in the following days.

Based on the Phivolcs' Earthquake Bulletin on its website, as of 5 p.m. of October 29, 2019, a total of 95 earthquakes, including aftershocks, occurred in Mindanao after the magnitude 6.6 earthquake.

As to the possibility of an aftershock with a magnitude greater than 6.6, Vidad said they were still observing the ground movements.

He said it was the strongest earthquake to occur in Mindanao in recent history and was wider in scope.

He said there was no tsunami threat since it was an inland earthquake.

As of 2 p.m. Tuesday, the Davao City Public Safety and Security Command Center (PSSCC), in its partial report, said there were no missing or dead people in the city.

The city reported minor cracks on walls in 30 schools and eight other structures:

Lots for Less in Matina Aplaya

Gaisano Mall of Davao in Bajada.

Minor damage to the ceiling were reported at Deco Arts, Quimpo Boulevard, Matina and Doña Pilar Elementary School in Barangay 5-A.

The Oroderm City Complex building in C.M. Recto Street was reported to have tilted during the earthquake. However, the management of the commercial complex later clarified that "its buildings and structures have been declared structurally safe and strong."

“Members from the CEO (City Engineer’s Office) of Davao have just finished their inspection of Oroderm City. They stated that the foundation of the building and the building is safe and strong. No cracks were noted at the basement. The upper floors were also inspected and minor cracks in the walls are only normal and part of building movement," it said.

Inspection at Ilang and Lasang Bridge is ongoing.

The police said they are all residents of Barangay Sto. Niño, Tugbok District and are all in stable condition after being treated by responding personnel.

The Davao City Government suspended classes in all levels in both private and public schools and universities.

"All school owners, teachers, and other school personnel are hereby instructed to subject school structures to a safety inspection with a qualified engineer immediately," Mayor Sara Z. Duterte-Carpio said in a statement.

"If they find building defects that are dangerous and need repair, they should immediately condemn the area and not allow students to use the same," she added.

However, the suspension of classes on Wednesday, October 30, shall be on a case-to-case basis and shall depend on the individual schools' announcement.

Davao City was also rocked by a strong shallow earthquake centered near Tulunan, Cotabato on October 16, 2019.