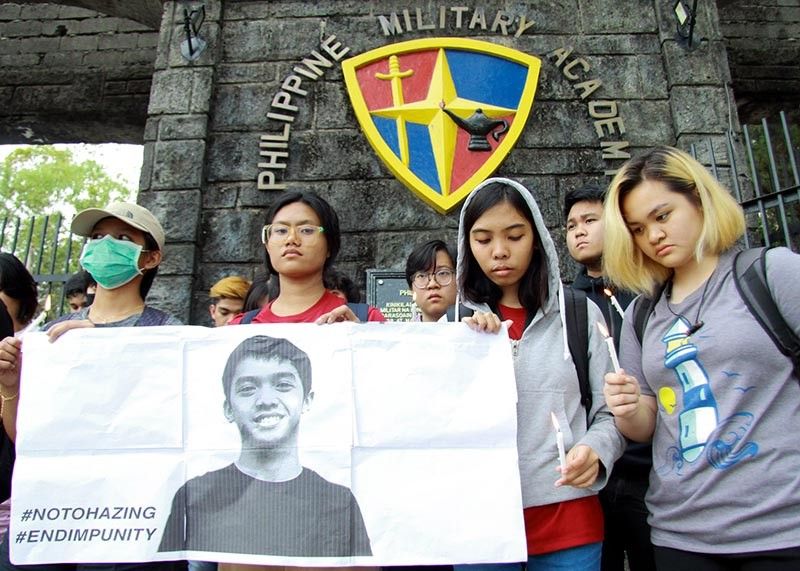 BAGUIO. Students light candles in front of the Philippine Military Academy (PMA) Monday afternoon, October 28, 2019, to commemorate the 40th day of the death of Cadet 4th class Darwin Dormitorio due to injuries from hazing. (Photo by Jean Nicole Cortes)

FORT DEL PILAR - Students from various universities and organizations in Baguio City held a silent protest and lighted candles in front of the gates of the Philippine Military Academy (PMA) to mark the 40th day of the death of Cadet Fourth Class Darwin Dormitorio.

Students from different universities condoled with the Dormitorio family and continued to call for justice for the plebe while calling on the military institution to stop hazing.

Ponce said the fight to end all forms of violence is not only in the academy but applies to all organizations and institutions.

Ponce added the event was an initiative with other organizations and universities. They informed the Dormitorio family, who marked Darwin’s 40th day with a Mass in Cagayan De Oro City.

Baguio City Police Office and National Bureau of Investigation reports showed that Dormitorio died on September 18 inside the academy after sustaining injuries due to hazing by his upperclassmen.

NBI-Cordillera recommended that at the two generals as well as six cadets and three doctors be charged with violations of the Anti-Hazing Law of 2018 and Anti –Torture Act of 2009 and/or Article 248 of the Revised Penal Code in supplement to the case earlier filed by Baguio City Police Office.

“The inclusion of Brig. Gen. Bacarro and Lt. Gen. Ronnie Evangelista as additional and proper respondents is justified by the fact that the evidence gathered by this office (NBI-CAR) shows that these facts of hazing and torture had been ongoing and properly reported to these officers yet they did not perform any act to prevent it,” the NBI-CAR complaint reads.

“I think we have completed our investigation, extensive and we included the right persons involve in order to avoid cover up as strictly directed by our Secretary of Justice,” Geologo added.

Bacarro and Evangelista earlier resigned from their posts over command responsibility after Dormitorio’s death.

“By failing to neither address the true medical condition of victim nor refer him to proper medical facility that can administer the proper medical care,” the NBI added.

Doctor Ronald Bandonil, medico legal officer of NBI who was requested to conduct an autopsy on Dormitorio’s remains, noted massive contusions all over the front of the chest and in the middle abdominal area below the ribs.

There were also fresh contusions in both sides of the abdomen extending to the groin. At the back were also bruises and scratches of varying age.

Geologo said it is now up to the panel of city prosecutors to evaluate the findings of NBI.