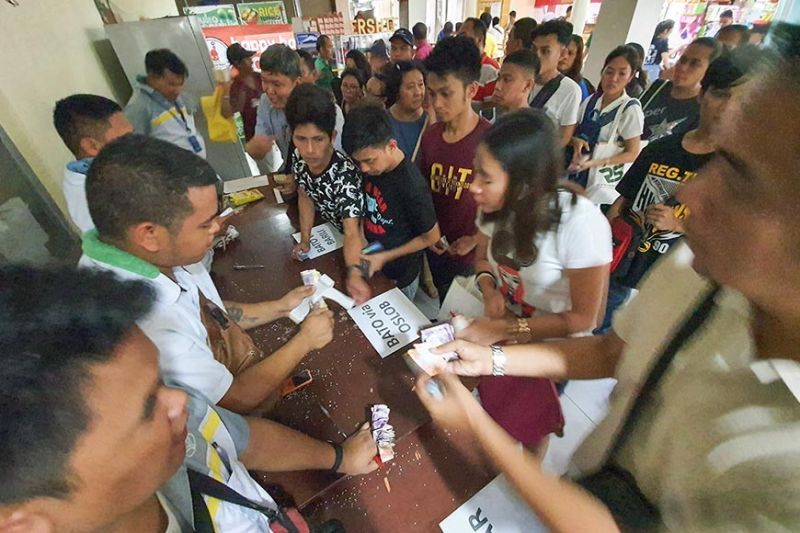 SAFE TRIP. Passengers now have to secure their tickets first at the entrance of the Cebu South Bus Terminal before they can proceed to their buses. The move improves security. More than 50,000 passengers are expected to use the terminal as they travel for the observance of All Saints’ and All Souls’ Days. (SunStar photo / Arni Aclao)

“ANNOUNCEMENT to everyone that will use the terminal: No one will be allowed inside the terminal unless you are a passenger and you are holding a ticket.”

So said Gov. Gwendolyn Garcia, who stressed the need to keep the Cebu South Bus Terminal (CSBT) free of loitering bystanders to ensure the safety and convenience of passengers.

Ticketing agents of bus lines set up booths at Entrance 2 where they issue tickets to passengers.

The policy, though, has caught some passengers off guard.

Anne (real name withheld) said she got confused when her taxi was not allowed to enter the premises.

Before, Anne said, the taxi would drop her off at the unloading area inside the CSBT, and she would then hop on a bus. The conductor didn’t issue tickets until they were already on the road, she said.

“I’ve observed that some passengers had to be separated from their bulky bags because the entrance got too crowded. I usually leave for my hometown around this time for kalag-kalag (All Saints’ and All Souls’ Days) and it had always been hassle-free for me. Why can’t they just let us take our seats inside the bus and issue the tickets there?” she told SunStar Cebu in a mix of English and Cebuano.

Garcia lamented that she had wanted to reintroduce the policy, which was implemented during her earlier stint as governor, a few weeks ago ahead of the peak season for the observance of All Saints’ and All Souls’ Days.

“I had already insisted as far back as two weeks ago that we should go back to the previous policy so that all the bus lines should have their ticketing agents prior to entrance into the passenger waiting area,” Garcia said.

On Oct. 16, 2019, the Office of the Governor received a complaint from a university professor from Zamboanga who reported his bag, which contained several documents and a laptop, missing. He said he last saw his bag at the CSBT.

Saying the incident gave a “bad name” to the Capitol, Garcia called for a meeting with officials of the CSBT on how to maximize security measures at the facility.

Among the points raised was to keep the facility free of non-passengers or people who have no business at the CSBT.

“To my frustration, this was not followed... That is going to cause problems, in so far as the security of our passengers and even the terminal is concerned because anybody can just come in,” Garcia said.

The governor said the reason she wanted the policy implemented ahead of the holiday was because they anticipated more than 50,000 passengers to flock to the CSBT.

“Why this was not implemented, I can only fathom,” Garcia said. “I reminded them: first and foremost, that is not a shopping mall. That is a terminal. The safety and security of our passengers is paramount.”

The governor held a meeting at the Capitol Tuesday morning to discuss security measures at ports and terminals during the holiday.

“They (CSBT officials) did not attend the rest of the meeting and went back because they had to implement the policy,” Garcia said.

Sought for comment, Cebu Provincial Operators Transport Cooperative chairman and Barili Vice Mayor Julieto “Julie” Flores said: “Actually, I was there during the dry run. It is okay for regular season, but it may not be applicable for peak season (like kalag-kalag). It’s dangerous for passengers to stay outside because the lines are too long.”

In a text message to SunStar Cebu, Flores said he will reserve his comments on the policy for now, since it is still in its early stages.

“It will start on trial and error. After that, the correct system will follow,” he added. (RTF)