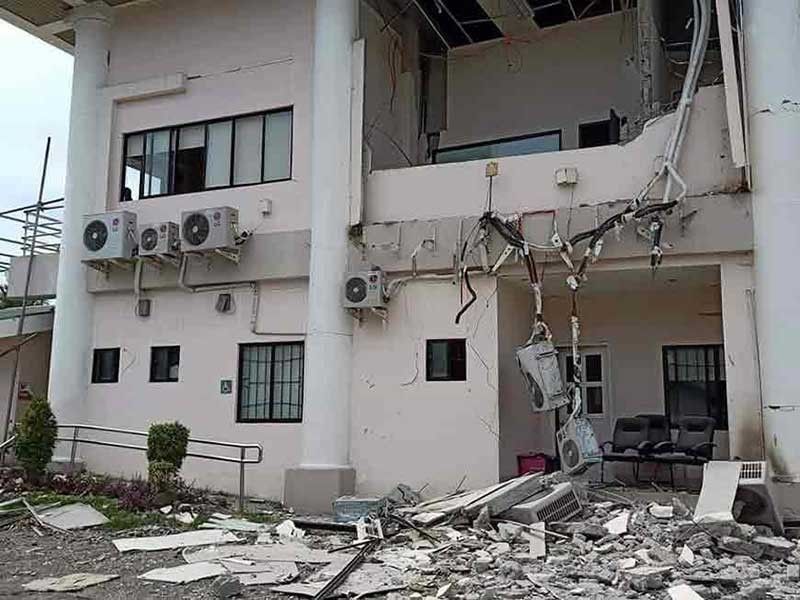 DAVAO. The Magsaysay Municipal Hall in Davao del Sur was heavily damaged when a magnitude 6.6 earthquake shook parts of Mindanao on October 29, 2019. (via Superbalita Davao)

FIVE people died and two others were missing due to the magnitude 6.6 earthquake that hit parts of Mindanao on October 29, the National Disaster Risk Reduction and Management Council (NDRRMC) said on Wednesday.

It was the second major earthquake to occur near Tulunan, Cotabato in two weeks. With a magnitude of 6.6 and a depth of seven kilometers, this tremor was more destructive than the first on October 16.

As of 12 a.m. the Philippine Institute of Volcanology and Seismology (Phivolcs) recorded 270 aftershocks, ranging from magnitude 1.5 to 6.1. A total of 160 were plotted while the 50 others were felt.

The five fatalities were hit by falling debris. The NDRRMC said they were still verifying the reports from their regional office.

The missing people were both from Davao del Sur. They were reported missing during a landslide in Upper Bala, Magsaysay.

The NDRRMC also reported that 133 structures were damaged. The list includes 94 schools, 11 health facilities, seven other government owned buildings, one places of worship and 20 private establishments.

Power interruptions were experienced in several areas following the tremor. Electricity was restored on the same day.

The agency said 79 cities or municipalities suspended classes on Tuesday. As of Wednesday, classes in 31 areas were still suspended to allow authorities to assess the structural integrity of the school buildings.

The NDRRMC said the Department of Social Welfare and Development (DSWD) has stockpiles and standby funds amounting to P1.978 billion to cater to the needs of the affected population.

“Our City/Municipal Police Stations including the Provincial/City Police Offices have their respective Search and Rescue (SAR) Team primarily to assist concerned agencies in the conduct of medical assistance and evacuation of residents in affected areas. As for the Regional Headquarters, we have two (2) SAR Team and two (2) Security Team on standby ready to be deployed anytime if the situation demands,” PRO 12 Deputy Regional Director Rex Dela Rosa said.

The DIMTG will provide support to Regional Disaster Risk Reduction and Management Council (RDRRMC) during disaster. It aims to provide assistance during forced evacuation of residents in disaster-prone areas as well as in the conduct of appropriate disaster response and police intervention.

Dela Rosa said Wednesday that they were still gathering information from counterpart agencies and line units on the extent of damage caused by the earthquake in the region.

Mindanao was still experiencing an earthquake swarm following the October 16 tremor when the second major earthquake shook the area.