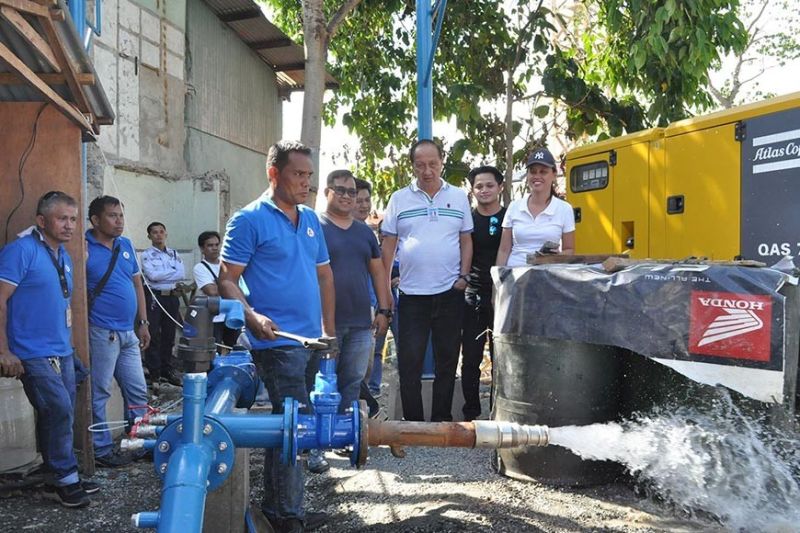 DROP IN THE BUCKET. MCWD Acting General Manager Stephen Yee (center, in white shirt) leads the commissioning of Well G11 in Sitio Pailob, the boundary of barangays Sambag 1 and 2. The well has a daily capacity of 1,200 cubic meters. MCWD plans 30 wells to address its daily shortage of 262,000 cubic meters. (Contributed photo)

AFTER a year of negotiations, a new well in Southwestern University Phinma Properties was commissioned on Oct. 29, 2019 for residents of Sambag 1 and 2 in Cebu City.

The well, which has a production of 1,200 cubic meters per day, is one of more than 30 wells that MCWD will develop as part of its short-term solution to the water supply shortage.

MCWD, through the policies set by its Board of Directors since last year, identified the Mananga and Lusaran dams and a desalination plant as its long-term solutions while small-scale desalination plants and bulk supply projects are among its medium-term measures to address the water scarcity in Metro Cebu.

Factors like population growth, economic and business opportunities and in-migration contributed to this fast increase in the water demand over theyears.

Meanwhile, overextraction, nitrate contamination and saltwater intrusion contributed to the depletion and shutdown of a number of sources.

Starting August this year, MCWD lost over 20,000 cu. m. per day due to various problems encountered by its private water suppliers and the effects of the dry spell.

Sambag 1 and Sambag 2 were among the affected areas when the supply from the Buhisan Dam and Jaclupan Facility dropped unexpectedly at this time of the year.

The weather bureau reported below normal rainfall levels in August and September.

As a response to the supply shortage in these areas, MCWD’s newly purchased water trucks were deployed daily to supply water to the affected residents.

However, with this new well, which is on a private lot, supply will improve and there will be longer service hours for MCWD consumers. The needs of the property development clients will also be served.

The Lahug well was a successful partnership with the Cebu City Government since it owned the lot where MCWD developed a well. Negotiations started last year through the initiative of the MCWD Board of Directors.

Three other wells will be commissioned as soon as distribution pipes are laid. Two others are currently being developed, and MCWD just signed agreements for two more.

MCWD is calling on local government units, property developers, like condominiums, subdivisions and similar businesses, to contact its Water Sourcing Committee by calling the General Manager’s Office at 254-8434 local 501, for possible partnerships in sourcing. (PR)