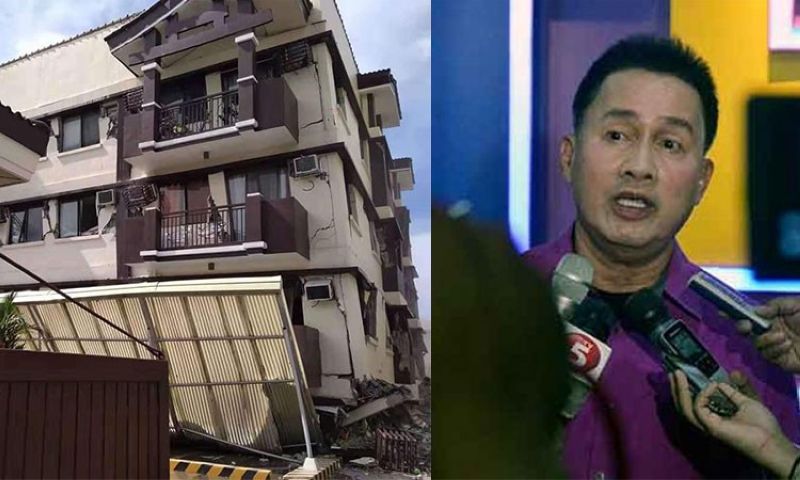 DAVAO. Pastor Apollo Quiboloy (right) and a photo of Ecoland 4000's residential building that was damaged by the magnitude 6.5 earthquake that shook some parts of Mindanao Thursday, October 31, 2019. (SunStar File/Penar Vincent via SunStar Davao)

A magnitude 6.5 earthquake struck 28 kilometers northeast of Tulunan, Cotabato and other parts of Mindanao, including Davao on Thursday (October 31) at 9:11 a.m. Damaged buildings were reported in Davao City and other areas struck by the earthquake.

Along with the toll of destruction and death came a video clip of Pastor Apollo Quiboloy saying he had stopped the earthquake, "Lindol! Stop!" And it stopped, he told a gathering of his flock. You owe me your lives, you could've died, he said to members of his Kingdom of Jesus Christ church, The Name Above Every Name, Inc.. which is based in Davao City.

Quiboloy, 69, has been claiming he is the "appointed son of God and the owner of the universe."

He wasn't swallowed by earthquake or struck by lightning when he made the claim that nature obeyed his order, the only turn of event that would've have disenchanted his hard-core, star-struck followers. He was grinning inside his plush temple, enjoying the adulation of his flock that, from the worshipful faces, believed his claim.

Depositors are in the dark

A news story in CDN Digital and in the SunStar Superbalita column of Atty. Ellie Espinoza last Tuesday (October 29) broke the news that a number of depositors of a savings bank in Cebu City complained of having parts of their deposits with the bank pilfered by a bank manager. One version said the total amount, in two Cebu City branches of the same bank, could reach P50 million.

Neither the story nor the column mentioned names: the bank or the branch manager or anyone of the complainants was not identified. For valid yet annoying reasons: no bank official was talking, Bangko Sentral ng Pilipinas had been silent and the victims were yet to file formal complaints.

That helps the bank and the banking system but what about the other depositors in the bank who needed to know and be assured if their money was safe? That could also hurt the confidence of depositors in other banks, particularly those banking with smaller financial firms, who might decide to withdraw their deposits and transfer to bigger and relatively safer banks.

Two or three names of banks were floated in the rumor circuit, obviously unfair to the firms that were not struck by the pilferage.

How much protection does the Philippine Deposit Insurance Corp. (PDIC) give to depositors?

What most people know is that the maximum coverage per depositor is P500,000, surely a small amount these days among middle-class depositors. The figure was last adjusted starting June 1, 2009. If there has been an increase of the amount, the public doesn't know it yet.

There's also the provision that PDIC covers only risk of a bank ordered closed by the Monetary Board. It has no liability for losses caused by theft, fire, or closure resulting from labor strike or public disorder. Note the exemption of "theft," under which the bank manager's alleged thievery may fall.

That doesn't mean, of course, the depositor cannot sue the bank and its owners for the malfeasance of their employees or the failure on institutional safeguards and protocol. The depositaries must refund lost deposits that are stolen by masked robbers or by the banks' own people who don't wear masks.

The litigation, of course, would be a lot of hassle and could take forever, meantime denying depositors use of their money, mostly hard-earned and sole savings. The phrase "as safe as money in the bank" may have earned a new meaning.