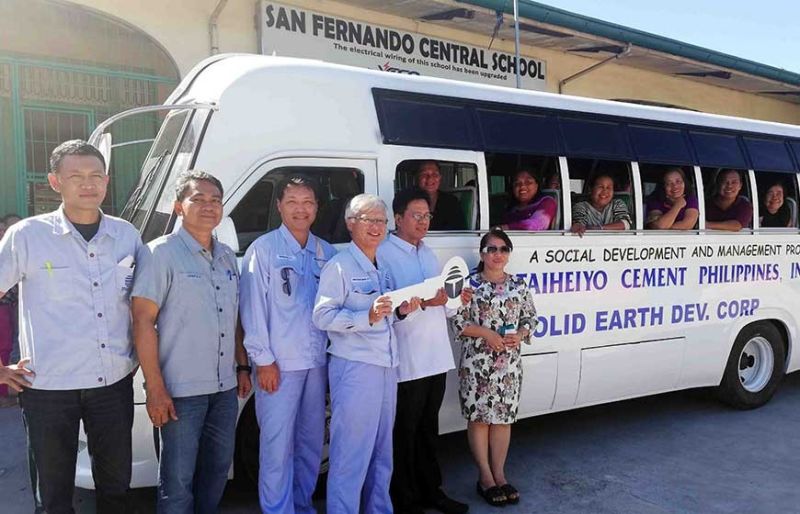 ALLIED companies operating in San Fernando, Cebu donated a service bus to the Department of Education (DepEd) that would be used for the day-to-day operations of the district office in the municipality and the schools it oversees.

Reluya said she felt a sentimental value for the bus as it was her husband, the late Ricardo “Nonoy” Reluya Jr., who facilitated the donation for the town’s schools as then the president of the town’s Association of Barangay Councils.

“We would now be able to reach out to the schools, gather teachers and students for off-campus activities in our district, organize educational trips, and send delegations to provincial and regional events,” he said.

TCPI senior vice president for operations and plant manager Chiyuki Sugawara said the donation was consistent with the company’s belief that “business is more than just an economic endeavor.”

“In our pursuit for business growth, we integrate social and environmental concerns into our operations and interaction with stakeholders... to fuel hope and keep the torch of hope flourishing among the company’s stakeholders,” he said.

TCPI vice president for administration Shigeki Koide also underscored the donation as a “demonstration of sincerity and commitment of the company in building better communities.”

Speaking through his mining operations division manager Samuel O. Tagsip, SEDC president Dennis Tenefrancia noted that the donation manifested the company’s “high regard to our teachers.”

“Our educators play important roles in forming young generations into responsible and productive citizens,” he said, adding that the bus will “encourage our teachers to enhance further their skills in teaching to develop student’s competencies.”

TCPI and SEDC have been jointly supporting the town’s thrust for education, far more than the usual Balik Eskwela initiatives, by providing schools with needed tools and supplies to train and care for students better, and supporting scholars.DepEd San Fernando oversees 21 elementary schools, eight secondary schools and one integrated school.