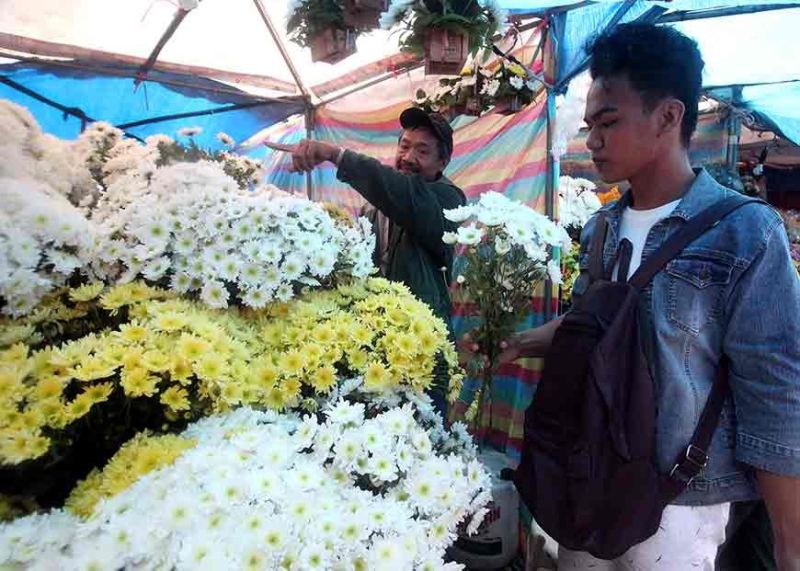 SPARED by typhoons and calamities, Benguet farmers assured enough supply of cutflowers for this year's observance of All Saints' and All Souls' Days.

With the good weather, Department of Agriculture Cordillera Director Cameron Odsey said there is no problem with the supply of cutflowers for Undas.

"We have an oversupply because of the good weather," he said.

Tents are set up at the La Trinidad public market, which is selling first class AA Chrysanthemum with a price range of P80 to P120.

Latcoga, a federation that started in 2013, has 700 active members from the 16 barangays of La Trinidad and neighboring Benguet towns.

In the province, Chrysanthemum ranks number one among ornamental crops due to the favorable climatic conditions favoring the production of the cutflower. It is also one of the best earning crops due to its lucrative profit during All Souls' Day and All Saints' Day, Christmas, Valentine's Day, Mother's Day and the Baguio City's Flower festival.

Police Colonel Elmer Ragay, Benguet Provincial Police Office officer-in-charge, earlier disclosed security plans for those visiting their relatives for Undas and even tourists from the lowlands who will visit the province.

"Before we travel, we must first check ourselves, are we fit to travel, are we fit to drive in the best way possible. It's not going to be an easy ride from Manila going Baguio," he added.

Motorists are advised to have emergency contact numbers of police stations in case they encounter flat tires along the road, as well as to keep vehicles in good condition and remember to check their vehicle's battery, lights, oil, water, break, air, gas, engine, tire and self (Blowbagets) before driving.

Cemetery goers in La Trinidad were previously advised not to bring prohibited materials inside the cemetery including guns, sharp weapons, liquor to avoid any untoward instances in the holidays.