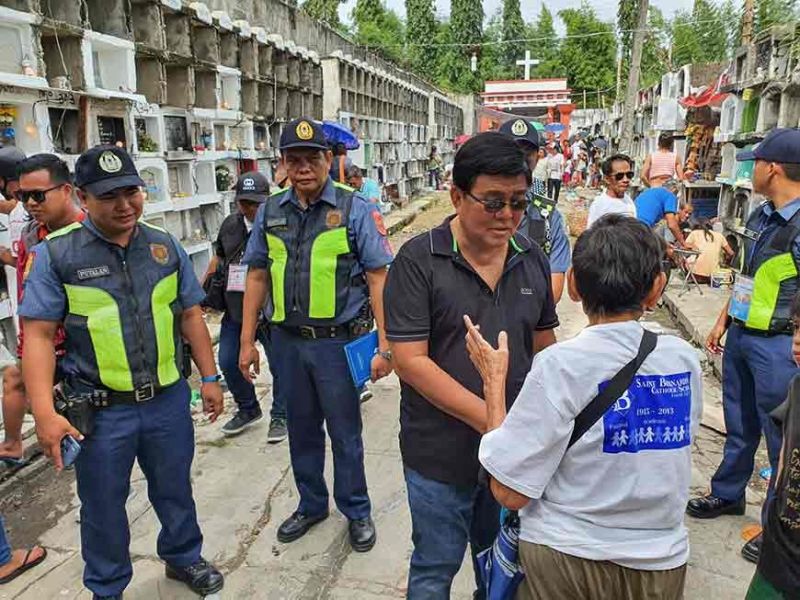 INSPECTION. After visiting the graves of his parents at the Queen City Memorial Gardens, Cebu City Mayor Edgardo Labella (second from right) visits several public cemeteries, including the Carreta Cemetery (above), where he talked to visitors and deployed police officers about the peace and order situation. (SunStar Photo/Arni Aclao)

Police were deployed in cemeteries to maintain order and to check for contraband.

At the Carreta cemetery, one of the biggest Catholic cemeteries in Cebu City, the condition was not too crowded as vendors were only allowed to sell their merchandise outside.

The vendors were kept in check by a stationary team deployed by the Prevention, Restoration, Order, Beautification and Enhancement.

Cebu City Mayor Edgardo Labella also directed authorities to penalize not only those who bring sharp objects and alcoholic drinks, but also those who violate environmental laws, specifically the anti-littering ordinance.

Labella said cleanliness should be observed throughout the celebration of All Saints’ Day and All Souls’ Day on Saturday, Nov. 2.

“We have to discipline our people because the garbage problem has metamorphosed into a social problem. We have to educate the people,” said Labella.

He told the police to warn those who throw their garbage indiscriminately, adding that Republic Act 9003, or the Ecological Solid Waste Management Act of 2000, penalizes violators.

Cebu City also has the anti-littering ordinance that imposes a fine of P1,000.

The mayor said he was satisfied with police visibility, adding that their presence would serve as a deterrent to crime.

“For the meantime, relatively peaceful and orderly with no untoward incident being reported, as of this day. And hopefully, it will remain,” P/Col. Geovannie Maines, acting Cebu City Police Office director, said in a mix of English and Tagalog.

Seized were liquor, cigarettes and sharp objects like scissors, screwdrivers, bolos and knives. The items, except for the liquor, were returned to their owners when they left.

It also set up medical stations with an ambulance on standby in the city’s seven cemeteries. The Bureau of Fire Protection also deployed fire trucks at the bigger cemeteries.

Meanwhile, Cebu Provincial Police Office Director P/Col. Jonathan Mariano did not encounter any problems when he inspected cemeteries in the towns of Asturias, Balamban, Consolacion, Tuburan and Danao City.

Cemeteries located along the highway initially caused heavy traffic, but this was addressed by rerouting motorists.