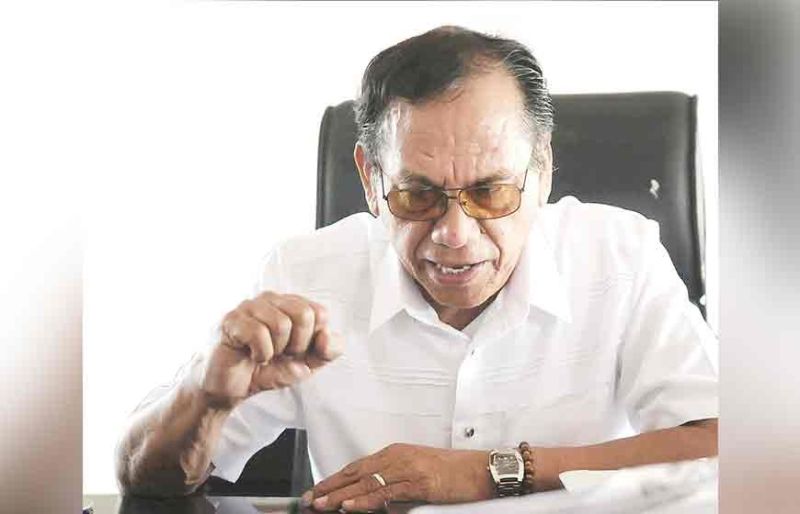 OBSTRUCTION OF JUSTICE. The Sandiganbayan has found former Talisay City mayor, now councilor, Socrates “Soc” Fernandez guilty of obstruction of justice in relation to the warrantless arrest of his adopted son, Joavan, in 2010. The anti-graft court has perpetually disqualified him from holding public office. (SunStar File)

THE Sandiganbayan has found former Talisay City mayor Socrates “Soc” Fernandez guilty beyond reasonable doubt of obstruction of justice in relation to the warrantless arrest of his adopted son, Joavan, in 2010.

The anti-graft court found sufficient proof that Fernandez, who is now a councilor in Talisay, had taken advantage of his official position as mayor by unlawfully retrieving a lady’s shoulder bag from a vehicle that was under police custody and investigation.

The case stemmed from a letter-complaint filed by the Cebu Police Provincial Office before the Office of the Ombudsman-Visayas on June 11, 2010.

The complaint stated that at around 5 p.m. on June 4, 2010, Fernandez retrieved a red lady’s bag from a red Isuzu Trooper that was parked inside an auto repair shop in Barangay Lawaan 2, Talisay.

At that time, the vehicle was allegedly under police custody and investigation after its driver, Joavan, was placed under warrantless arrest.

Joavan had reportedly poked a gun at a certain Vincent Joe Castrodes when the latter’s BMW Sedan and his Isuzu Trooper nearly collided in front of a subdivision in Barangay Bulacao, Talisay at around 3 p.m. of the same day.

The following day, June 5, 2010, Judge Soliver Peras of the Regional Trial Court Branch 10 of Cebu City issued a search warrant against the Isuzu Trooper for the seizure of certain firearms and ammunitions believed to be inside the vehicle.

He alleged that he took the bag as requested by its owner, a certain Katherine Jane Mahinay, adding that none of the attending policemen had prevented him from approaching the vehicle.

He also claimed that no one had informed him that the vehicle was under police custody nor was a search warrant presented. The area was allegedly not cordoned off as well.

In a resolution dated April 28, 2011, the Ombudsman found probable cause against Fernandez for violation of Section 1(b) of Presidential Decree 1829, which penalizes obstruction of apprehension and prosecution of criminal offenders.

He was likewise found administratively liable for simple misconduct and meted the penalty of suspension from the service for three months without pay.

On May 23, 2016, the Ombudsman issued an order denying Fernandez’s motion for reconsideration filed on Jan. 6, 2016, and sustained the finding of probable cause and administrative liability.

On Feb. 13, 2017, the Office of the Special Prosecutor filed the said information against the accused with the Sandiganbayan.

In a 19-page decision promulgated on Oct. 25, 2019, Associate Justice Maryann Corpus-Mañalac of the Sandiganbayan’s Fifth Division said the court has found the prosecution’s evidence sufficient to establish proof beyond reasonable doubt that Fernandez is guilty of obstruction of justice.

“The prosecution proved that, indeed, on June 4, 2010, despite having been informed by a police officer that the Isuzu Trooper was under police custody and investigation, the accused opened the vehicle’s front door on the passenger side and took away a lady’s shoulder bag therefrom and refused to turn over the same.”

“In other words, he suppressed or concealed the lady’s bag, including its possible contents, with the intention to impair its availability as evidenced in the investigation.”

SunStar Cebu tried to reach Fernandez for comment through calls and text message, but he was not available as of press time.

Fernandez is sentenced to pay a fine of P6,000 with perpetual disqualification from holding public office. In case of insolvency, he will be required to undergo subsidiary imprisonment.

Fernandez is currently serving his last term as city councilor.

He recently acceded to the post of number one councilor following the death of his colleague, veteran radio personality and politician Julian “Teban” Daan on Aug. 21, 2019.