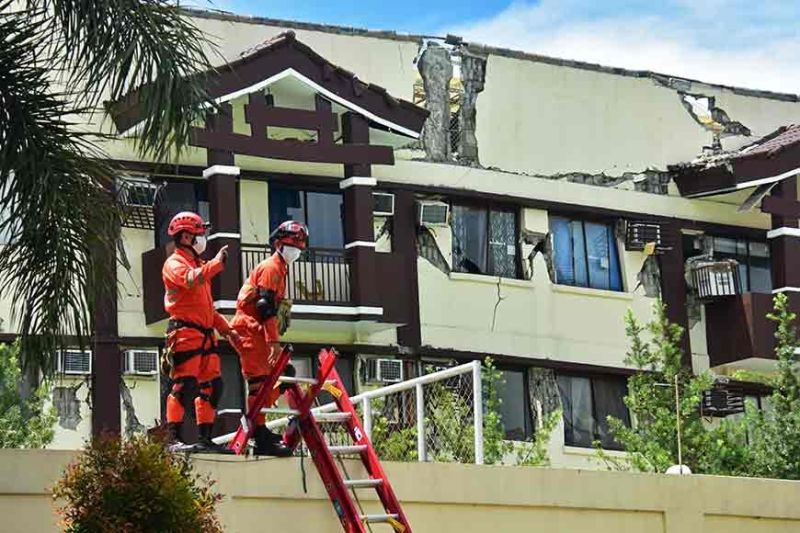 THE damage in condominiums following the earthquakes that affected Davao City may have cast an unfavorable business climate in the real estate industry, but real estate brokers are optimistic it will pave the way in raising the industry standards.

Yahnalee Marundan Cabradilla, a licensed broker and affiliate of various realty developers for five years now, said the damage incurred by some major housing projects have caused them to develop reservations in selling properties and the stigma of the potential buyers.

Cabradilla said she did not pursue a foreign potential buyer who has asked about units in Verdon Parc Condominium since she has yet to confirm its safety.

"Naay inquiry, foreigner but wala nako gi-push because ako mismo not sure sa safety. Ang inquiry is Tower 2 sa Verdon Parc which is turnover [in] March 2020 and I've heard na affected pud and naay crack (There was an inquiry, a foreigner but I did not pursue because even I am not sure of the safety. The inquiry was about the Tower 2 of the Verdon Parc which will be turned over in March 2020 and I heard it was also affected. It sustained cracks)," she said.

Cabradilla said one of her clients who had been paying for a unit in Avida has been asking about the consequences if she no longer continues to pay her balance.

She added she has received reports that the Tower 2 of Avida Towers was affected by the quake.

Another broker, Donato Esparrago II, said this status might go on for one to two years but it will help fortify the standards of construction in the city.

"[It is a] bad day for those engaged in real estate [business] -- developers, contractors, workers, brokers, agents, owners, investors -- but a great day for future buildings and condos especially next year pa ang start ng construction (especially those which will be constructed next year)," he said.

Esparrago said engineers, inspectors, and those who approve building permits must be pushed to ensure the standards.

Among the properties that were affected by the 6.6-magnitude quake on Wednesday, October 31, were Ecoland 4000 Residences, Verdon Parc Condominium, and reportedly the Avida Towers.

Meanwhile, a group of real estate industry players urged developers to be "honest and straightforward" to their buyers regarding the status of their buildings.

"We expect developers to be honest and straightforward in their communication to the public, particularly to the real estate brokers especially during these times because we need to give the buyers the correct information as well," Chai Abaya, president of the Chamber of Real Estate and Builders Association Incorporated (Creba), said in a text message to SunStar Davao.

Abaya said these situations can make selling of condominium units challenging for the real estate brokers.

"Definitely, it will have a challenge particularly in the perception of the buyers with regards to safety of buying units in condominiums," she said, adding that her colleague had a cancelled sale right after the earthquake.

"We want to sustain the progress we have started in the real estate and property development in Davao City but we need to be responsible at all times as we move forward," said Abaya.

With this, Abaya encouraged condominium unit owners whose units affected by the quake to have it checked by third party inspectors such as evaluation personnel from the city or municipal engineers' office and experienced civil/structural engineers from the private sector.

"We should advise those whose condos are affected to seek inspectors qualified to examine and determine if buildings are safe enough to be reoccupied immediately," said Abaya.