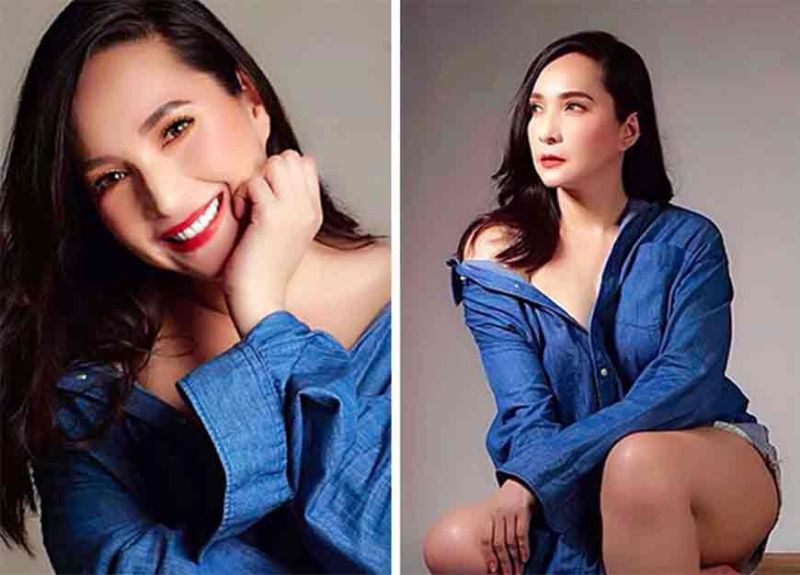 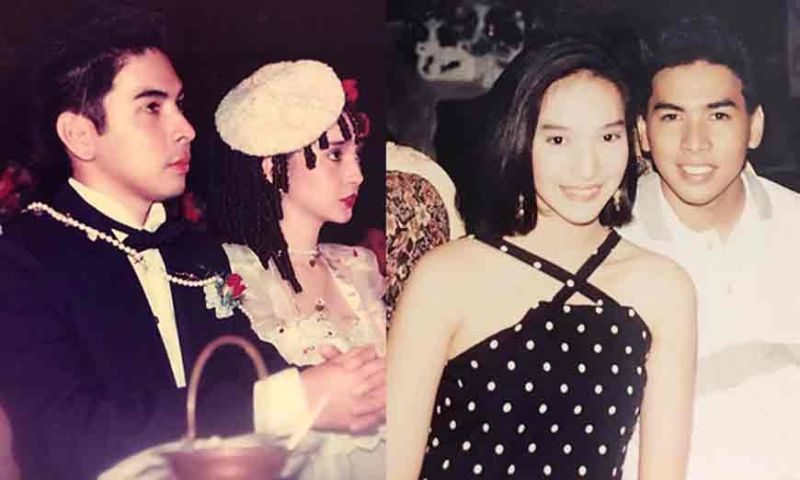 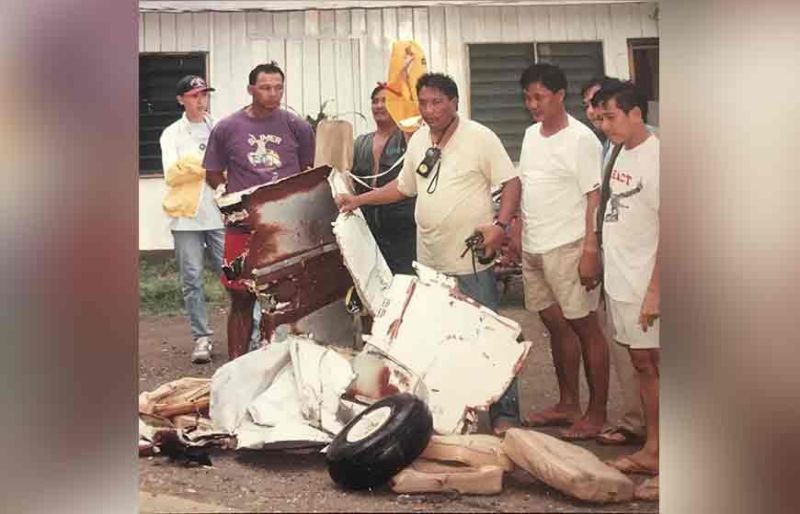 DAVAO. Debris from the single engine four-seater aircraft that crashed at Resa Bay within the Moro Gulf in Cotabato. Boompie and Anne were only 23 years old when the tragedy struck. (Contributed photo) 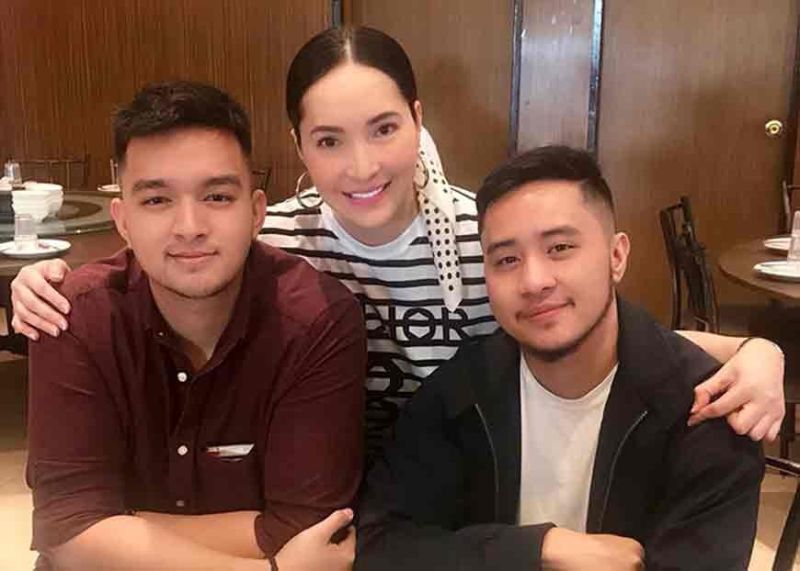 IT WAS a pilot wife's ultimate nightmare. In the late afternoon of February 4, 1994, tragedy struck when 23-year-old Captain Jacinto Rafael "Boompie" de Borja crashed his single engine four-seater aircraft at Resa Bay within the Moro Gulf in Cotabato.

"Part of me died with him that day," recalls his widow Antonette Bernadith "Anne" Feo. Like Boompie, she was only 23 years old then.

Boompie and Anne were high school sweethearts from Tagum City, Davao del Norte. Both blessed with good looks, charming personalities, and successful careers, many looked up to them as their "couple goals." Anne belonged to Club Pen '91 as one of the in-house models of Penshoppe. Her first national TV commercial for the iconic brand was a big hit in the '90s.

"The irony of fate is such that one so young, full of promise, with boundless energy and ambition, suddenly disappeared. In the midst of grief, I was tempted to question what seemed to be the most unfair and cruel turn of events in my life," recalls Anne, an AB Mass Communications graduate from Ateneo de Davao University.

Left to take care of their eight-month-old baby Ryan James de Borja, Anne eventually learned to give her complete confidence in the Lord. "It's only through Him that I will understand the purpose of the things I was made to endure," she reflects.

Picking up the pieces

"It was difficult, at first, picking up the pieces again," Anne admits. "I am just thankful that I had a solid support system. My family was awesome during those trying times," she says gratefully.

To provide comfortably for her son, Anne applied as a flight attendant of Saudi Arabian Airlines based in Jeddah. Some found it ironic that a young widow who lost her husband through a plane crash chose to work in the same industry. "I wanted to get over the trauma of what happened to Boompie," Anne explains. Her stint as an FA only lasted for a year, though, because she realized that she spent most of her salary and savings on expensive long-distance calls to her son whom she missed dearly.

Back in the Philippines, Anne thought that it would be hard for her to fall in love again because she married her soul mate. But, by some twist of fate, love found its way a second time. Anne re-married and was blessed with another son, Miguel Antonio Maningo. Sadly, the union lasted only for 10 years due to differences and trust issues. Alas, Anne bravely embraced the life of a single mom once more.

"As a single mom, I've found an incredible source of independence and strength through my situation. The best thing I could do for my boys was to show them how to be strong and resourceful individuals," Anne boldly declares.

Through the years, Anne tirelessly worked as a marketing executive; fashion consultant who specialized in modeling workshops and personality development; opened "Butik," an online boutique selling clothes, bags, shoes and accessories for women; became an endorser for Griño Dental Inc. Beautederm Corporation, and Promag 300; and ventured into the homemade gourmet business with her bottled BinagoongANNE. In spite of her busy schedule, she also earned her second degree, this time, in BS Nursing from Saint Mary's College in San Juan.

The hardworking mom also continued being a freelance model for print/TV ads for top brands such as Chowking, Jollibee Delivery, Pediasure Plus, BDO, Nescafe Classic, Tempra, Rebisco, Air 21, Avida, PLDT, Del Monte, among many others.

She likewise found herself acting in front of the camera, one day, when a good friend of hers from the TVC industry asked if she wanted to give showbiz a try. The self-declared "Probinsyana at Heart" landed hosting and acting roles in teleseryes, movies, and iWant TV series like "Be Careful With My Heart," "Maalaala Mo Kaya," "Nathaniel," "Ipaglaban Mo," "Wansapanataym," "FPJ's Ang Probinsyano," "Wild Flower," "The General's Daughter," to name a few.

"So far, I consider the role of Nanay Helen, the paralyzed/comatose mom of JC de Vera in 'The General's Daughter' as the most memorable. I enjoyed playing a character that shocked people, had substance, and touched people's hearts," she fondly reminisces.

The best is yet to come

"Moving on with life after a loss may be one of the hardest challenges that many of us face. Always keep the faith, pray hard, acknowledge the pain, and share your feelings with family and friends while managing to hold yourself with grace, poise and class," Anne advises.

Despite countless trials, Anne maintained her attitude of gratitude. "I welcomed gratitude in tough times. I always noticed the things that were still working. Gratitude made my days brighter. It became my coping strategy," she reveals.

Eldest son Ryan, now 26, is currently a Business Development Manager of a US-based company while youngest Miguel, 21, is graduating soon with a double major in Diplomacy and International Relations and English Literature from the Ateneo de Manila University.

Nowadays, Anne tries not to worry too much about the future because she knows that great things are yet to come. "Yes, I have dreams but there are so many things that I have no control over. I have learned to trust and get the most out of this life my Creator has given me!" enthuses the multi-faceted mom who is ANNEfazed through it all.

Special thanks to Anne Feo for the photos on this page. E-mail the author at mom.about.town.dvo@gmail.com. To view more photos, please visit http://momabouttowndavao.blogspot.com/.