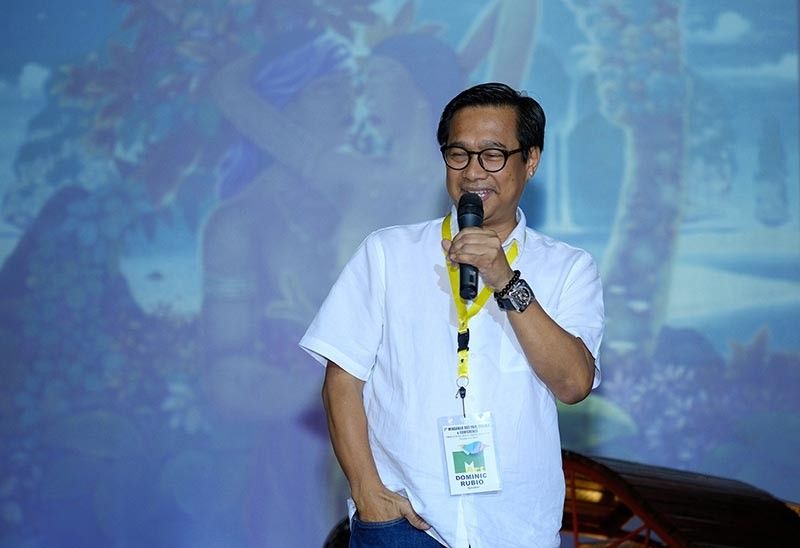 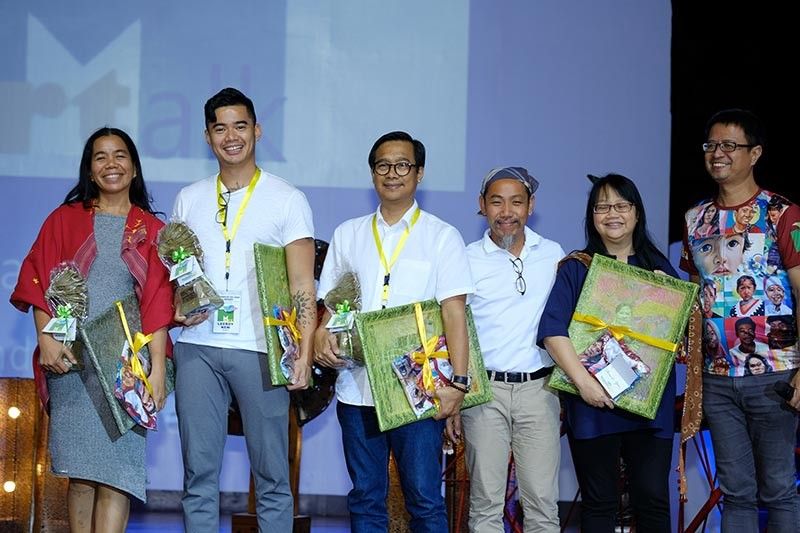 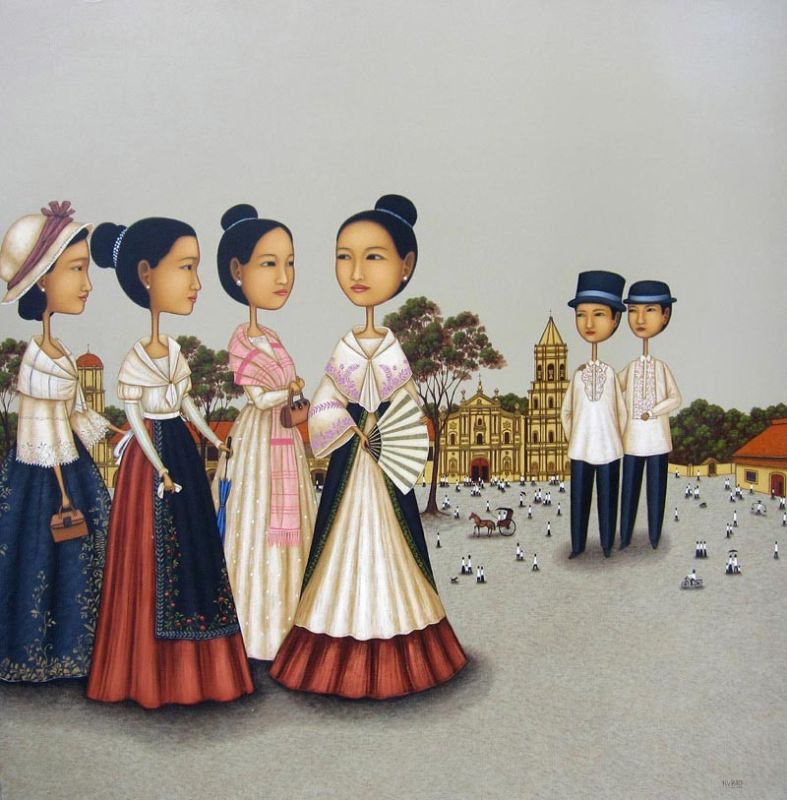 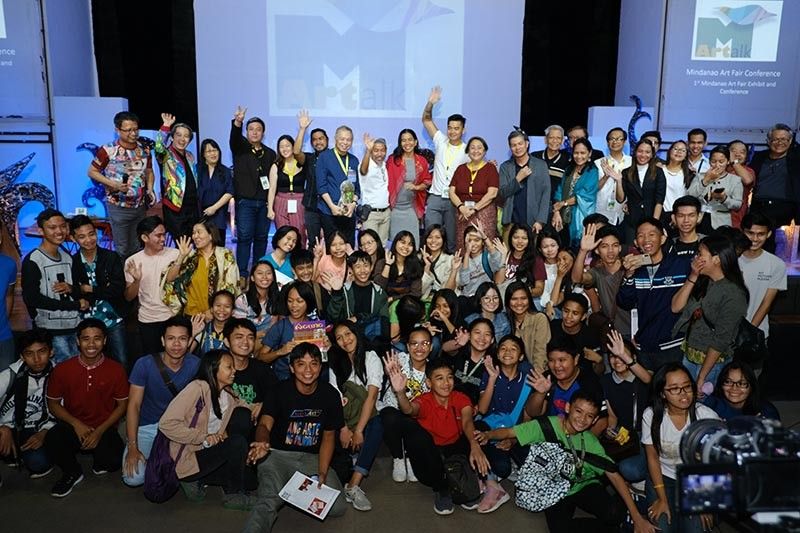 TEACHERS AND LEARNERS. A group photo with the speakers and organizers of the MindanaoArt Conference with some of the participants. (MindanaoArt photo) 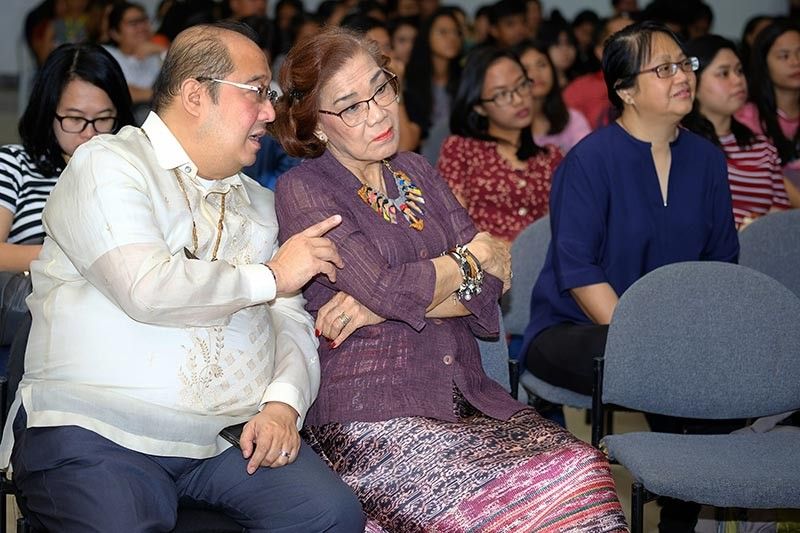 VISUAL artist Dominic Rubio is among the most sought-after by collectors in Manila and his long-necked round-headed figures in Filipiniana attires are easily recognized, gawked at, and snapped up by collectors.

What very few know, even among the Davao artists except the few he actually worked and mingled with like Lamberto “Obet” Acyatan of the Eden Nature Park, Rubio was a struggling artist who could barely keep his body and soul together in Davao City for three years in the mid-1990s.

It was in Davao City where he built his dreams, but it was in Manila where he learned the most valuable lessons that earned him a strong following of buyers and collectors – lessons in humility.

This was Rubio’s revelation during the MindanaoArt Conference held at the Philippine Women’s College of Davao last October 5 as part of the Mindanao Art Fair, Exhibit, and Conference (MindanaoArt).

“Isa lang ang masasabi ko, be humble, attitude pa rin, kasi hindi pwedeng ... itong galing ko! Kailangan pa rin humingi ng advise sa mga tao, kailangan open tayo sa mga kritiko, tanggapin natin, ganun. Kasi doon tayo makakakuha ng idea sa ikaluunlad ng ating art (One thing I can say, be humble. It’s all about one’s attitude. You can’t say, I am very good. You need to seek advice from others, you have to be open to critics, and accept criticisms because that is where you will pick out ideas to develop your art),” Rubio said, throttling a common belief among many local artists that artworks must not be criticized outside their peers because these are the personal thoughts and creations of the artists.

That realization came from years of almost earning nothing while dreaming of becoming a known artist.

He described himself as an island boy exploring Davao and the Island Garden City of Samal. His first paintings that he made here were of landscapes and orchids, he did not have figures then in his paintings.

But then, he met artists who told him to paint ethnic themes and so he studied the tribes: Tboli, Mandaya, Manobo, Bagobo, Blaan, and the Badjaos and painted them. His paintings were more realist than anything. Just renditions of what he saw that were jazzed up a little bit, but not much. He dabbled in making anklets and other stuff Davao artists adorn themselves with. But money remained scarce.

“I came to realize that Davao is not my arena that a career in art is not in Davao because during those times, there were no art fairs, I also did not know Kublai (Rey Mudjahid Millan, one of the organizers of MindanaoArt). So, thank you, Kublai, the art world gained life in Davao through you,” Rubio said in Tagalog.

He decided to return home to Manila and explore Filipiniana using a book by national artist for fashion Pitoy Moreno.

Still, he did not make it and continued struggling, until he crossed path with Gallery Joaquin director Jack Teotico, considered among the who’s who in art galleries in Manila and an art marketing guru.

His first show with Teotico was “successful”, he said, but it was not fulfilling. He felt that it was not yet his true self showing.

“It was a successful exhibit, but something was lacking. My paintings always had something else in the audience’s eyes. The comments would always be, it’s a little bit like this or that artist. It wasn’t just me. So I said, ‘Lord, I want my own style, please send me the right people, the right person’,” he said.

It wasn’t easy at first as he resented Teotico’s guiding hands.

“It was because, while I was doing my paintings, I would say, ‘why are you criticizing my works when you did not even have a hand in making these?’ Only I know what this painting is about. What I’m saying was, I am very good. But that was just me. That was my boastfulness,” he said still in Tagalog.

Somehow, he learned that he has to listen to advice and build up from there. That was when his paintings started to be snapped up at every exhibit. One of Rubio’s largest paintings of his long-necked Filipino figures is a mural inside the Philippine Embassy in Washington DC in the US.

He urged artists and aspiring artists to heed the advice of those who know the market, to accept criticisms and not take these as personal affronts, and to continue to study and find one’s personal style.

“There are many good artists. But during that time, I believed I was way better. I was full of pride. I ignored critics. I realized, you have to welcome critics. It was when I accepted criticisms when my style started to emerge. It was like I was Manny Pacquiao and Jack Teotico was my Freddie Roach. That was when I won the fight for my art,” he said.

Aside from humility, Rubio’s advice to all artists and aspiring artists: to continue studying their chosen subjects and styles. Even as he already made his name, he continues to study his subjects and is thus able to come up with ideas and creations that never repeat themselves even if the long-necked figures are already distinctly Rubio.

“Artist man kayo, ‘yun lang, tuloy-tuloy ang pag-aaral, ganun lang po (You are artists, keep on learning, that’s all),” he said in closing his talk during the second panel session of the conference that tackled “Artist Curating the Self”. Rubio shared the stage in this panel session with equally popular artist Leeroy New, who traces his roots in General Santos City, but who also made his name in Manila for his art installations, and Prof. Rosalie Zerrudo, who is known today for her Inday Dolls made by inmates of the women’s prison in Iloilo City, but who also spent decades in Mindanao learning and developing her art.

The MindanaoArt Conference, that earned initial flak from a few local artists, gathered artists who have roots in Mindanao but earned their name in the national capital for them to share valuable lessons on how to build a name and a collector base.