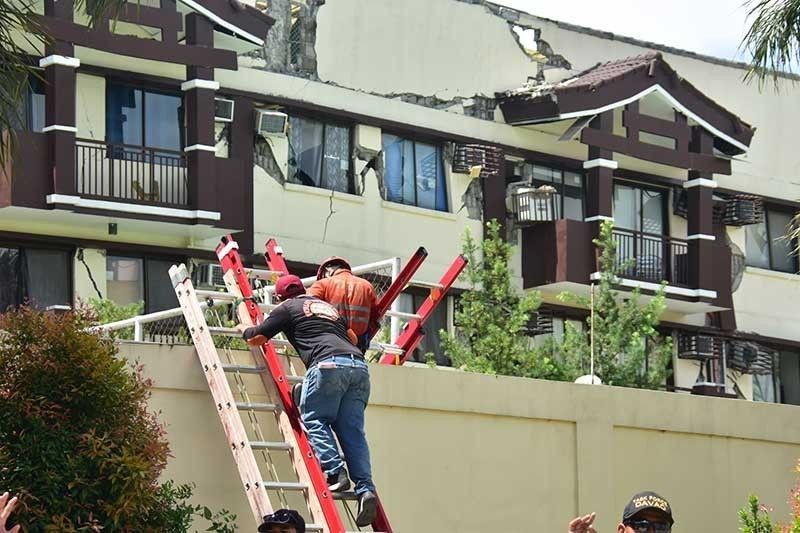 THE Cebu Provincial Government will extend financial assistance to local government units (LGUs) in Mindanao that have been affected by the earthquakes that have struck Cotabato and its neighboring provinces since Oct. 16, 2019.

For now, those who wish to extend help to the quake survivors may drop their donations at the basketball court located at the back of the Capitol building near the exit gate.

“Sugbo alang sa Mindanao” was launched by the Provincial Government as a relief operation that unites well-meaning Cebuanos to help alleviate the plight of Mindanao residents who are suffering from the impact of the earthquakes and their aftershocks.

Neil Angelo Sanchez of PDRRMO said quake-stricken families in Mindanao need immediate assistance such as potable water, blankets and food items that are either canned or packed.

Sanchez said they are also waiting for advice from their Mindanao counterparts as to other specific items that will be of help.

PSWDO officer-in-charge Wilson Ramos said they’re discouraging the public from donating clothes because these will just fill up the shipment and they have to prioritize immediate needs.

The relief operation will continue until the Capitol can gather enough supplies.

The Province will then coordinate with the Philippine Coast Guard Central Visayas (PCGCV) for the shipment of the donations.

Aside from the Provincial Government, the Department of Social Welfare and Development (DSWD) 7 has also partnered with the PCG in delivering relief goods to Mindanao.

“We are sending these goods as a response to the immediate needs of the earthquake survivors,” said DSWD 7 Director Rebecca Geamala.

From Cagayan de Oro, the goods will be taken to quake-stricken regions in Mindanao.

A team led by DSWD 7 warehouse unit head Jhon Balansag will supervise the turnover of the relief supplies to their regional counterparts.

Like the Capitol, the Cebu City Government still has to assess how many LGUs were affected by the quake before it will send financial assistance.

But Mayor Edgardo Labella assured that the City will provide help to survivors.

He sent Councilor Dave Tumulak to quake-stricken areas to discuss with local chief executives the kind of help they needed.

“Because there were many areas affected, if necessary, we have to spread the help that we are extending just like what we did to the Yolanda victims,” he said.

Labella said they cannot just provide help to one LGU.

His counterpart in Lapu-Lapu City, Mayor Junard Chan will give P1 million as financial assistance.

Chan said he will tap the City Council to pass a resolution for this purpose.

“Actually, wala pa nako naistoryaan (City Council), basin by Monday para maapil namo sa agenda inig session on Thursday (Actually we haven’t discussed it with the City Council, maybe by Monday so that we can include it in our agenda on Thursday),” he said.

He said he also needs to discuss if they have to go to Mindanao to hand over the financial aid.

Talisay City Mayor Gerald Anthony Gullas Jr. also expressed willingness to provide help to the quake survivors, but he, too, needs to discuss the matter with the City Council.

Mandaue City Mayor Jonas Cortes has not yet announced if he plans to send aid.

“None, for now. We will know on Monday,” said City Administrator Jamaal Calipayan.

Since Oct. 16, a series of earthquakes and aftershocks have been plotted in Tulunan, Cotabato.

All three quakes were inland and tectonic.

A total of 23 people have died.

In its latest situational report on Nov. 1, the National Disaster Risk Reduction and Management Council (NDRRMC) said 10 people were killed on Oct. 29 and six others perished on Oct. 31. Seven were killed when the first quake struck on Oct. 16.

The NDRRMC said at least 403 people, including 14 from Northern Mindanao, 16 from Davao, 373 from Soccsksargen, or Region 12, and one from Bangsamoro Autonomous Region in Muslim Mindanao were hurt.

Two persons, who were believed to have been buried by a landslide, remained missing as of Nov. 1.

The NDRRMC said a total of 3,220 structures including 2,617 houses, 513 schools, 20 health facilities, 30 other public structures, six places of worship, 26 private and commercial establishments and eight roads and bridges were affected by the quakes.

The agency said a total of 6,009 families, or 30,045 persons, were affected in 72 barangays in Davao and Soccsksargen.

Some 2,552 families, or 12,760 persons, were being attended to inside evacuation centers. RTF, JJL, WBS, KFD WITH A REPORT FROM JKV