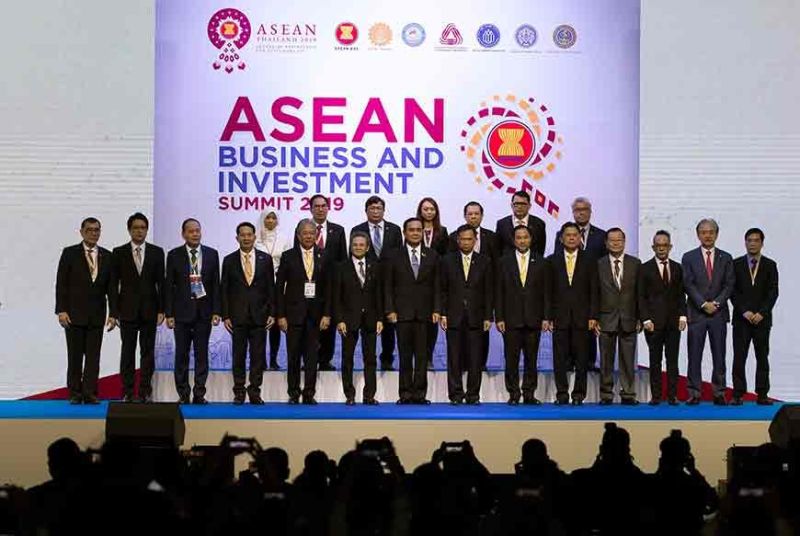 NONTHABURI, Thailand -- Southeast Asia should use the sway of its shared market of 650 million people and speak with "one voice" to ensure it is treated fairly in an age of protectionism, Malaysian Prime Minister Mahathir Mohamad said Saturday, November 2, as leaders gathered for a regional summit.

The image of unity the Association of Southeast Asian Nations (Asean) strives to project has been clouded by wrangling over a long-delayed agreement on a free trade bloc. Asans's 10 members are also divided over the handling of territorial disputes with China.

There were signs of progress, with officials saying they hope to present a preliminary agreement on the proposed Regional Comprehensive Economic Partnership (RCEP) aimed at creating a 16-member trading bloc including Asean and six other major economies, led by China.

Mahathir told business leaders attending Asean meetings that they should unite in fighting back if countries try to shut them out of their markets.

The trade war between Beijing and Washington and President Donald Trump's "America first" stance have many countries sharing a common goal of protecting their access to wealthy Western markets.

"Asean is quite a big market for the whole world. We don't want to go into a trade war," Mahathir said. He described campaigns against exports of palm oil from Malaysia and Indonesia over concerns regarding labor and environmental issues as "sabotage."

"If they do things that are not nice to us, we have to be not nice to them," he said. "If you cut back some imports of palm oil from Malaysia, we can cut back our imports from them."

"We should have one voice," Mahathir said. "If you go it alone, you will be bullied."

Trump opted not to attend the Asean and other regional meetings outside Thailand's capital, Bangkok, that began Saturday and run through Monday. Many other regional leaders are attending, including Chinese Premier Li Keqiang, Japanese Prime Minister Shinzo Abe, and Indian Prime Minister Narendra Modi. Trump and Vice President Mike Pence are said to be busy with campaigning on behalf of fellow Republicans.

Mahathir, who is 94 and known for not mincing his words, had some harsh things to say about the U.S. leader and his policies, describing Trump as "not a very nice man."

Arin Jira, who chaired the meeting as head of Asean's Business Advisory Council, said the gathering should call for "world economic peace" against trade wars that are causing havoc.

"The result of war is only destruction," he said.

Philippine Trade Secretary Ramon Lopez told reporters that Asean trade ministers and counterparts from wealthier Asian countries expect to report to their leaders on Monday that seven years of negotiations on RCEP are "nearing conclusion."

Regional leaders asked their trade ministers last year to conclude the negotiations this year. "We cannot go there you know (and say) 'It's not yet concluded, we're far from it.' We'll really look silly. That's the reason why there is this hard, strong effort to reach a conclusion," Lopez said.

China is among those leading the negotiations along with Asean members and their dialogue partners Japan, South Korea, Australia, India, and New Zealand.

But some countries such as India have expressed concern that the deal could flood their markets with cheap Chinese goods and undermine local manufacturers.

RCEP will be one of the world's biggest regional trade blocs if all 16 nations join, covering some 45 percent of the global population and about a third of GDP, with projected trade of more than $10.3 trillion, or nearly 30 percent of the world total.

Asean also struggles over how to address tensions over China's encroachment into the disputed waters of the South China Sea.

Vietnam wanted Asean leaders to issue a communique that would mention Chinese movements into waters where its southern neighbor has exclusive rights to exploit energy resources, and other recent, aggressive acts off the Philippines and Malaysia.

China, through its Asean ally Cambodia, has opposed any such move, two Southeast Asian diplomats told The Associated Press.

After weeks of wrangling, senior diplomats reached a compromise on expressing concern over "serious incidents in the area, which have eroded trust and confidence, increased tensions and may undermine peace, security and stability in the region," one of the diplomats said.

The phrase would not name China or mention other details, the diplomat said. Both officials spoke on condition of anonymity for lack of authority to discuss the issue publicly.

China and its Asean allies have steadfastly refused attempts to use the annual summits as an arena to rebuke Beijing for its actions, which include building seven islands on disputed reefs that U.S. officials said could serve as military platforms to intimidate rival claimants.

China claims virtually the entire South China Sea, a vital waterway for global commerce. It opposes naval and aerial patrols by the U.S. and its allies as American interference in an Asian problem. Beijing also regards the U.S. concept of a free and open Indo-Pacific region as a strategy to contain China.

Much of Asia looks to the U.S. to help counter China's growing reach and power. Trump's absence is a disappointment to some in the region and may undermine the U.S. assertion that it puts a high priority on trade and other ties with the region.