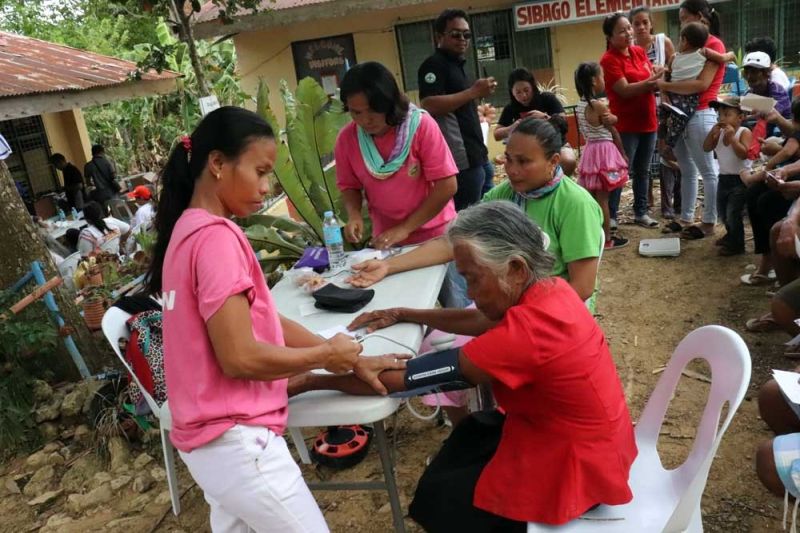 A MINING company recently sent a medical mission to Sibago, a mountain barangay in Pinamungajan, Cebu for the first time.

The activity—organized by Solid Earth Development Corp. (SEDC)—catered to 424 residents who hardly get medical attention.

An optometrist also examined the eyes of 112 residents, who went home with a set of eyeglasses, according to Mitzie Almira Carin, SEDC division manager for human resources and administration.

Sibago Barangay Captain Paulino Canoy with Councilors Juan Candole and Pedro Canoy and barangay health workers lent a helping hand during pre-listing and during the recent conduct of the activity.

Sibago resident Tarsiana Barnido, 70, said there is no clinic nor a drug store in her home village.

“We have to go to the town center to buy medicines,” she said in Cebuano.

Sometimes, she has to go to Barangay Tabunok, Talisay City to get her medicines.

“I already have several illnesses. I have to spend a lot,” Barnido said.

Barnido and her neighbors were delighted that SEDC sent a medical mission in Sibago.

“We have ourselves checked by the doctors. We also received free medicines and vitamins,” she said.

Gloria Pauner, 72, wished that SEDC would continue conducting medical missions in her village, saying she and her neighbors need help.

Barnido’s son Armando, 49, had a stroke three years ago. He could hardly talk and walk. His son said Sibago is far from the hospital. “That is why most people here have no choice but to endure their illnesses,” he said.

Barnido hopes the next mission will include minor surgery, so her cataract can be removed.

With Taiheiyo Cement Philippines Inc. (TCPI), the company first sent a mission to two Pinamungahan barangays in September 2012 in coordination with then Provincial Board member Alex Binghay. The medical personnel attended to 642 residents.

SEDC also organized its medical missions in 2014, 2016 and 2017, catering to 1,588 residents in 11 barangays. The company will soon operate a quarry to mine out silica in an uninhabited portion of Pinamungajan’s uplands for manufacturing cement at the TCPI plant in South Poblacion, San Fernando. (S)