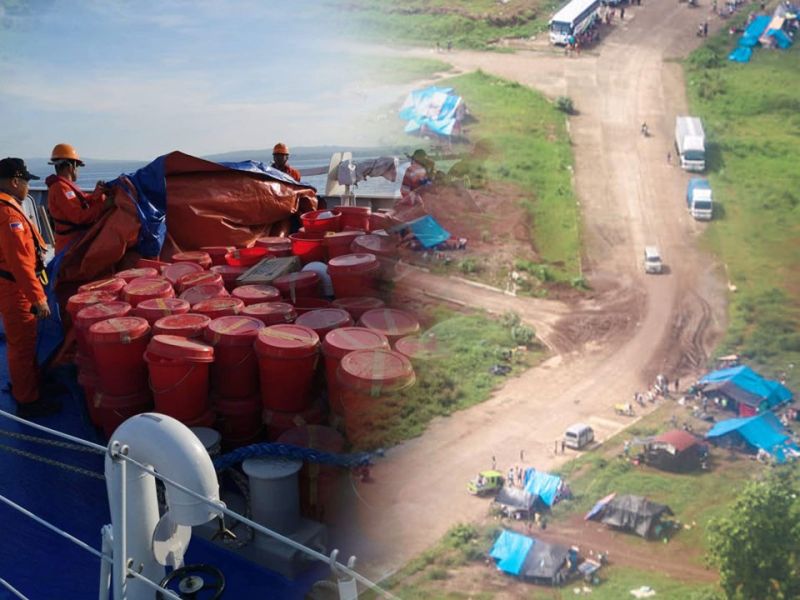 TWO vessels from Zamboanga City docked yesterday morning, November 3, at the Davao City port, loaded with relief goods which will be distributed to the earthquake-affected families in the provinces of Davao Region and North Cotabato.

In an interview with the designated officer of the national headquarters of the Philippine Coast Guard (PCG) Commodore Joseph M. Coyme, the two PCG ships - BRP Bagacay and MCS 3010 - were loaded with assorted relief goods.

He added they had already coordinated with Davao City Risk Reduction Management Office (CDRRMO) which has committed trucks to transport relief goods to nearby affected areas while waiting for the arrival of PCG Boom trucks.

He added that they chose Davao City to be the drop off point of all the relief operations because it is the most accessible of all and near the affected areas.

“It was assessed that Davao City is the most strategic staging area wherein it has all the support system, accessibility of seaports, airports, and roads as well as its proximity to the distressed provinces.

Aside from PCG personnel in Southeastern Mindanao, there is also an augmentation of around 71 PCG personnel coming from the Northern Mindanao District who will assist in the relief distribution.

Ten wheeler boom trucks from Manila also loaded with relief goods will be arriving in the city. These trucks have the capability to clear debris and assist trapped victims.

On November 2, PCG conducted an aerial surveillance in quake-stricken areas namely Digos City, Bansalan, Makilala, Tulunan, and Kidapawan City onboard the PCG Islander 251 manned by its pilot commander, Captain Philip Soria, together with some press people.

Coyme said the purpose of the activity is to assess the situation in a different perspective. From above, blue tents can be seen, especially in Makilala, as some residents put up tents close to their houses and in open spaces as their safety preparation should another earthquake happens. There were also landslides seen on a mountainous part of Makilala.

“We already anticipated because pag-conduct ng aerial surveillance, we can have a greater area view at ma-identify natin ano ‘yong mga areas talaga na gravely affected so we can strategize, we can make our tactical planning to immediately address especially those areas na hindi pa naabutan,” Coyme said.

Structural damage in a certain mall in Digos City and the Eva's Hotel in Kidapawan was evident. The pilot had to go around twice or thrice for the media onboard to get a clearer footage of the destruction.