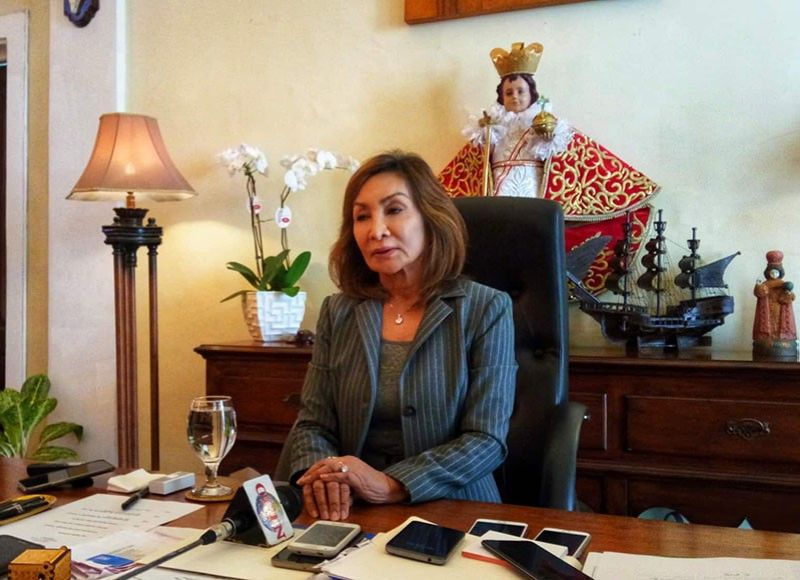 GOV. Gwendolyn Garcia is set to extend the ban on shipments of live hogs, pork, pork-related products, by-products and boar semen from Luzon until June 30, 2020.

The governor decided on the extension after samples of Mekeni Food Corp. skinless longaniza and hotdog tested positive for African swine fever (ASF), a disease fatal to animals but not to humans.

“It does not elate me to state that because of all that we are now seeing in Luzon, where the ASF virus is obviously not contained and in fact is spreading in alarming proportions, as governor of the Province of Cebu tasked with the duty to protect the province, its inhabitants and our P11 billion hog industry, I have decided to extend the total ban on all pork and pork-related products coming not only from ASF-infected countries but also from Luzon,” Garcia said on Monday, Nov. 4, 2019.

Garcia is set to sign an amendment to Executive Order (EO) 16, which banned live hogs, pork, pork-related products, byproducts and boar semen from Luzon for a period of 100 days.

The ban, which was supposed to end on Dec. 28, is meant to protect Cebu’s hog industry from ASF.

More than 62,000 pigs have died due to the disease or have been culled since the outbreak, as the infection has spread to the provinces of Rizal, Bulacan, Pampanga, Pangasinan, Nueva Ecija and Cavite and Quezon City in Metro Manila, according to the ASF bulletin of the Food and Agriculture Organization, dated Oct. 24.

“ASF is a clear and present danger to the entire country,” Garcia said.

The governor said Provincial Veterinarian Mary Rose Vincoy had initially recommended a much longer extension given the current state of the viral infestation in Luzon.

Garcia, though, stressed that she is willing to lift the ban before its expiration date once the Department of Agriculture assures that the disease has been contained and cleared.

“I decided that we shall extend it until half of 2020 with the assurance again that if we see an improvement in the situation or we do see and we are assured that the virus has been completely contained, that measures have been undertaken to ensure that the spread of this virus through carriers shall be avoided, then we could lift the ban,” Garcia said.

Pampanga-based Mekeni Food Corp. on Monday, Nov. 4, confirmed that two of its products have been tainted with ASF.

In a statement, Mekeni said specific batches of Mekeni Picnic Hotdog Regular (500 grams) and Mekeni Skinless Longaniza (Uncooked) (200 grams) were found to have DNA traces of ASF despite compliance with all regulatory requirements.

All Mekeni pork-based products were recalled and pulled out of supermarket shelves and other sales outlets last Oct. 26.

“These products are currently quarantined and a batch sampling has been submitted to an independent laboratory for ASF testing. We are still waiting for the results of these tests,” the company said.

Operations at the company’s pork-based processing area have also been suspended since Oct. 26.

The facility has been cleansed and disinfected and a third-party company has been commissioned to conduct swabbing and testing of the facility. Operations will resume when the facility is cleared of any trace of ASF.

“These measures are part of our commitment to support the government in its campaign to control the further spread of the ASF that is threatening the hog industry,” the company said.

Mekeni assured that it will cooperate in an ongoing investigation to determine the source of ASF.

The company also expressed support for a review of current protocols on the issuance of certifications for both local and imported raw meats.

“We will also continue to work with the Bureau of Animal Industry, National Meat Inspection Service and the Food and Drug Administration, as well as other industry stakeholders, for the implementation of a more comprehensive plan to mitigate the spread of the ASF,” it added.

Meanwhile, pork supply in Cebu will remain sufficient despite the extended entry ban on pork items from Luzon into the province.

Rolando Tambago, president of the Central Visayas Pork Producers Cooperative (CeViPPCo), assured that local pork suppliers will meet the current demand in the market and that shortage of supply is highly unlikely.

He even asserted that Cebu pork producers have assured that supply will be “110 percent” sufficient through the yearend.

The extended ban is also favorable to the local hog industry, he said, amid growing concerns on the swine fever.

“It’s great news for us, hog farmers, to hear that the governor is extending the total ban of pork and pork by-products from Luzon,” he told SunStar Cebu on Monday, saying they support the move to protect Cebu’s hog business from the swine fever.

“The CeViPPCo will also continuously be a partner of the government agencies to protect Cebu from ASF,” Tambago said.

Currently, majority of pork products in Cebu markets are sourced from suppliers within the province. It’s a different scenario, though, at some of the fast food chains, where meals with pork are no longer served.

A manager of a fast food store at an uptown mall in Cebu City told SunStar Cebu their customers have been asking why pork meals have not been available for weeks.

Supply constraints in specific areas was the main reason cited by the store in a notice it posted in its ordering counter.

Some fast food outlets put a reminder on their dashboard to inform customers that meals made with pork are on hold. Also, they assure customers that the spaghetti and hotdog they serve are not made of pork.

The Philippine Association of Meat Processors Inc., the country’s largest group of meat processors, earlier claimed that there would not be enough ham and other pork products in the Visayas and Mindanao during Christmas because of the local government units’ bans on pork products.

Aside from Cebu, 59 other provinces have imposed a ban on shipments of live hogs, pork and pork-based products from Luzon in a bid to contain the disease. (RTF, CSL, MVI with a report from JMT)