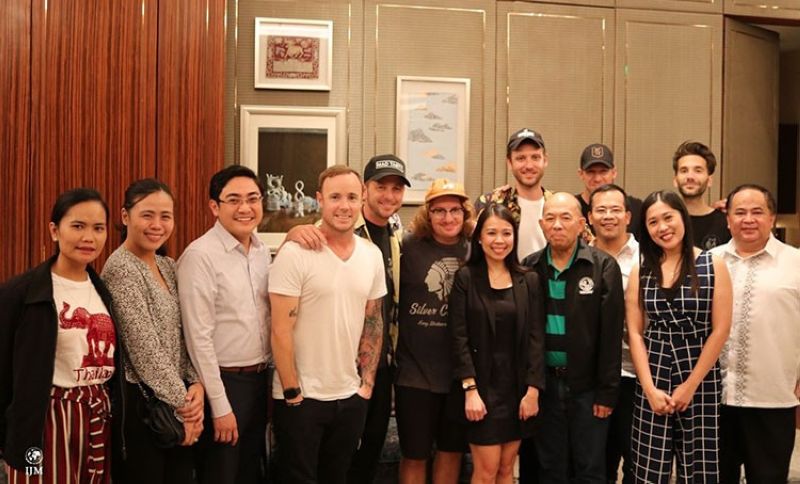 AMERICAN band OneRepublic recently spent two days in the Philippines to better understand the problem of online sexual exploitation of children (Osec) and firm up their partnership with International Justice Mission (IJM) to combat Osec and other forms of modern-day slavery.

Founded by the members of OneRepublic, the Good Life Foundation is “dedicated to giving those in need of help the chance to live a good life.”

At a dinner hosted by IJM, the musicians were able to interact with partners from the government and Smart Communications. The latter, upon hearing the issue of Osec from IJM, vowed to support the fight against Osec.

In an interview by Glam-O-Mamas founder Amanda Griffin-Jacob, who has also committed to support the fight against Osec by rallying her social media followers and network to the cause.

Tedder described Osec as “the darkest and most devious form of child molestation and exploitation in the world.”

Tedder vowed to help put a spotlight on the issue.

“It's dirty, it’s dark. And I think that a lot of our fans are watching this right now are going, ‘Oh my God, that happens?’ Some people don’t know that happens. So, I think that’s it. It’s just saying it and not glossing over what it is and talking about it and remind people that slavery still exists,” he added.

Filkins shared, “There’s a whole ‘nother level of devastation that you experience that is so emotional and so personal when you see this. When you have your own children, I think that ultimately hits harder in a more special way.”

On their official Facebook page and Instagram account, the band wrote: “Amazing, eye-opening visit with International Justice Mission in Manila. The work this organization is doing is truly heroic. We are honored in their fight against slavery.”

OneRepublic’s trip ended with a visit to the headquarters of San Miguel Corporation, which has also supported the restoration of Osec survivors by providing tangible support through the San Miguel Foundation and the San Miguel Foods Inc.

Lawyer Samson Inocencio, national director of IJM Philippines, expressed confidence that ending Osec is possible and that the solution is within reach.

He said: “It’s very easy for us to be consumed and overwhelmed and immobilized by the issue. And it seems that there is really no hope. But there is so much hope. And this is just a wonderful opportunity to be part of the hope for these children.” (PR)