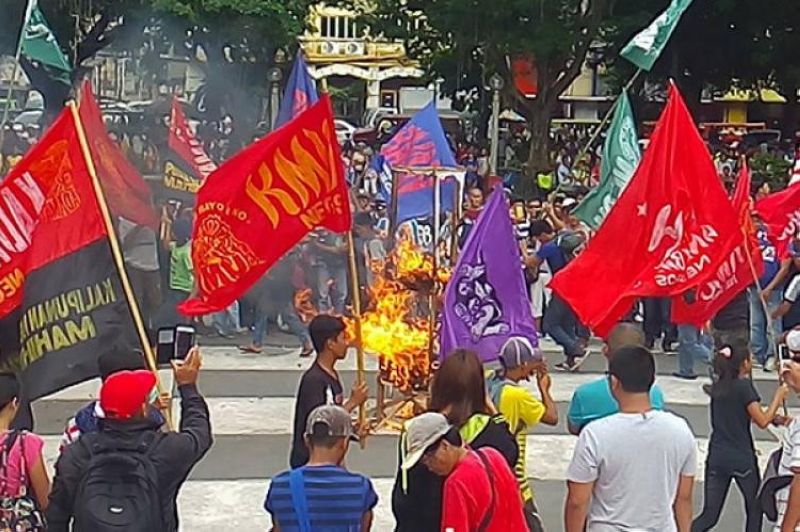 MANILA. In this file photo, protesters from left-leaning organizations hold a protest in time for President Rodrigo Duterte's State of the Nation Address. (File Photo)

POLICE raided the Manila office of Bagong Alyansang Makabayan (Bayan) before dawn Tuesday, November 5, and arrested three activists in what appears to be a “crackdown” on left-leaning groups.

They will be charged for illegal possession of firearms after police seized assorted firearms and ammunition during the raid.

Quoting a report from the Manila Police District, Sinas said the three activists were arrested around 1:15 a.m. in an office in Barangay 183, Tondo Manila.

The arresting officers from the Criminal Investigation and Detection Group (CIDG) and local police were armed with a search warrant issued by Quezon City Regional Trial Court Branch 89 Judge Cecilyn Burgos-Villavert for violation of Republic Act 10591, also known as Comprehensive Law on Firearms and Ammunition.

Several cellphones and a laptop were also among those recovered in the operation.

The arrested persons were brought to the CIDG office in Manila for booking, documentation and filing of appropriate cases.

They were arrested at the Bayan Manila office at Flora Street corner Clemente Street in Tondo, Manila less than a week after more than 50 activists in Negros Occidental and Metro Manila were also taken into custody.

The raids and arrests started on October 31, 2019 just before a long holiday weekend in the country, on the strength of four search warrants issued by Judge Cecilyn Burgos Villavert of the Quezon City Regional Trial Court Branch 89.

In Negros Occidental, joint police-military teams simultaneously swooped down on the offices of Bayan Muna, Gabriela and the National Federation of Sugar Workers, and on the residences of suspected communists.

More than 50 individuals suspected of being members of the Communist Party of the Philippines and its armed wing New People’s Army, including 14 alleged “child warriors”, were nabbed.

Charges of illegal possession of firearms and explosives and qualified human trafficking were filed against 42 individuals in Bacolod City Monday, November 4, 2019.

Karapatan and other left-leaning groups have accused the police of planting the firearms and ammunition as evidence against the activists.

“We hold to account the Philippine National Police, the Armed Forces of the Philippines and the Duterte government’s National Task Force as per Executive Order No. 70,” Karapatan said in a statement.

“The narrative that there are guns and bombs in the said office, as what the government has peddled in the raids of offices in Negros, is preposterous and a barefaced lie meant to justify these patently arbitrary arrests and to silence social justice workers and activists,” it added.

Sinas, however, said this is the usual alibi.

“That is their alibi and so be it anyway our investigators are doing fine and we will be filing a case then they could have it as defense in the court,” he added.

Meantime, PNP spokesperson Brigadier General Bernard Banac said the series of arrests of activist leaders and members only shows the rule of law and criminal justice system at work.

“The PNP performs its mandate to enforce the law following established procedures with utmost respect for human rights,” he said, when asked if there is a crackdown on activist groups in the country.

“We assure the public that the PNP remains alert and vigilant to prevent occurrence of crimes and ready to respond to any emergency, calamity and call for assistance,” he added. (SunStar Philippines)