Lorenzana to quake victims: Go to evacuation centers for relief 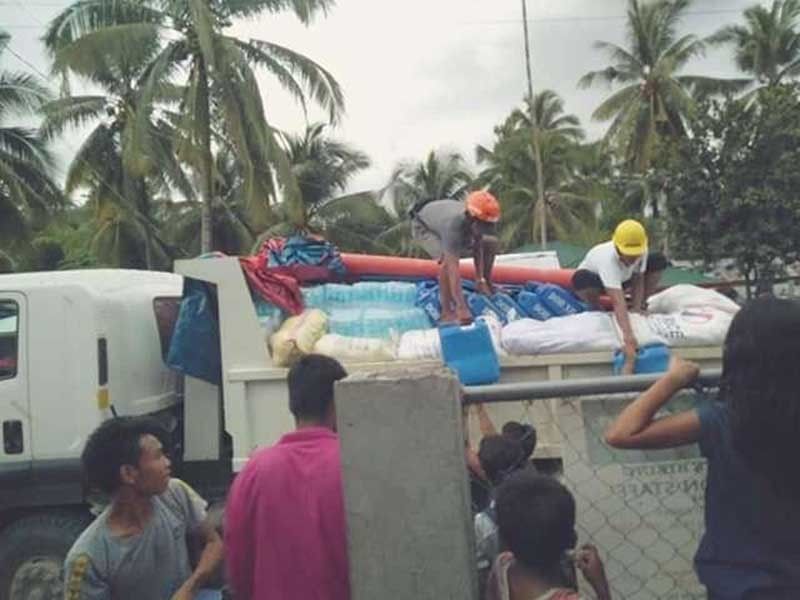 TULUNAN. Relief goods arrive in Tulunan, Cotabato. A series of earthquakes since October 16, 2019 were centered near Tulunan. (Photo from LGU Tulunan)

INSTEAD of soliciting for relief goods on the streets, people affected by the series of earthquakes in Mindanao should proceed to designated evacuation centers and barangay halls so they could avail themselves of relief items from the government, Defense Secretary Delfin Lorenzana said Tuesday, November 5.

"They should go to those places where the assistance is waiting for them," he said in a statement following reports that several affected families were posting messages and soliciting water and food from the passersby.

Lorenzana, the official in charge of rescue and relief efforts in Mindanao, urged barangay officials to assist in the distribution of relief goods as well as in the management of the evacuation centers.

He also instructed local government officials and the Philippine National Police (PNP) to clear the highways of people asking for help.

Lorenzana also enjoined all other concerned government agencies to assist the Department of Social Welfare and Development and Office of Civil Defense in undertaking relief operations.

As of Tuesday, November 5, the National Disaster Risk Reduction and Management Council said 37,716 families or 188,583 persons were affected by the series of earthquakes.

NDRRMC executive director Ricardo Jalad said majority of the affected families opt to stay near their houses to secure their belongings.

“Most of evacuees are staying beside their houses. They are afraid that with aftershocks occurring, their lives are at stake if they stay in their houses. If the situation normalized, I think they can look towards re-occupying or repairing their houses,” he said.

The NDRRMC said 21,072 houses were destroyed due to the tremors while 8,345 were damaged.

A total of 1,331 other structures, including schools, health facilities, government-owned buildings, places of worship, commercial establishments and roads and bridges, were also damaged.

The disaster council said, however, that the Department of Public Works and Highways has found all infrastructure facilities safe and passable.

The NDRRMC said the DSWD has enough supplies to address the basic necessities of the affected population.

“As of today we have forwarded 47,000 family packs from DSWD. The management of the effects of the earthquakes and the relief operations are still within the capability of the Philippines. We can still handle it, there is no necessity to call for international assistance but we are grateful to these countries who have expressed their readiness to assist as well as those who have already provided donations,” Jalad said.

“The big challenge now is ensuring the efficient and orderly distribution of relief goods and management of evacuation centers that will be done with collaboration among local government units and various national government agencies. The next challenge will be ensuring the transition of people affected to early recovery,” he added.

Meantime, Jalad urged those who intend to donate for the affected families to coordinate with the local government units to ensure fair distribution of goods.

The series of quakes started with a magnitude 6.3 event on October 16. Hundreds of aftershocks and lesser quakes have occurred since then. (SunStar Philippines)