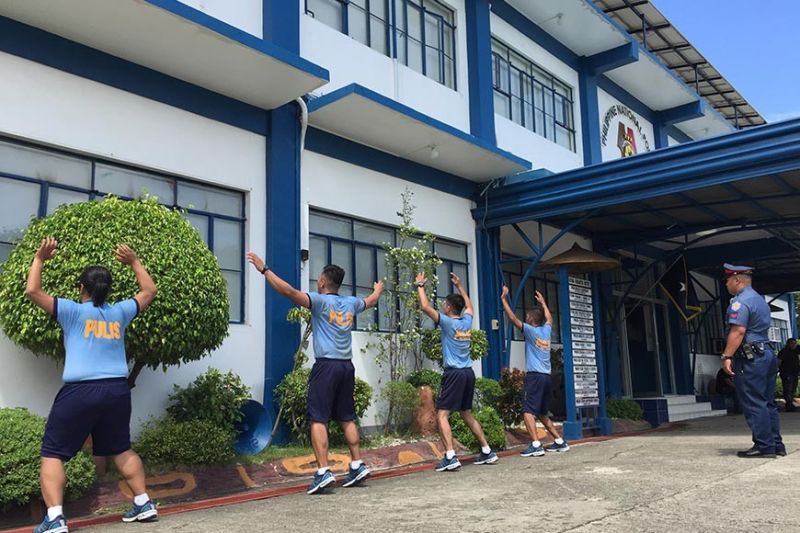 ILOILO. Four police personnel from Boracay Island exercise in front of the headquarters of the Police Regional Office-Western Visayas in Camp Martin Delgado in Iloilo City on Monday, November 4, as punishment for violating the guidelines on the use of cellphones during office hours or while on duty. (Leo Solinap)

FOUR police personnel assigned in Boracay Island were relieved from their posts and returned to the Police Regional Office (PRO)-Western Visayas after they were caught playing with their cellphones.

According to PRO-Western Visayas spokesperson Lieutenant Colonel Joem Malong, the three policemen and a policewoman violated the guidelines on the use of cellphones during office hours or while on duty.

"They were caught playing with their cellphones and immediately they were instructed to report to here (PRO-6) to be corrected or punished on their violations," Malong said.

Malong added that the punishment, called on-the-spot correction, is given to personnel with minor infractions.

"We have laid down the guidelines and do's and don'ts for PNP (Philippine National Police) personnel especially when we are rendering duties," she said.

Malong said police in the region should be responsible for their actions and dealing with other people.

The police official did reveal the names of the four police personnel and when they were caught.

But she said it was a high ranking police official of PRO-Western Visayas who was doing on-the-spot inspections who caught the four police personnel with the rank of patrolman in Boracay Island.