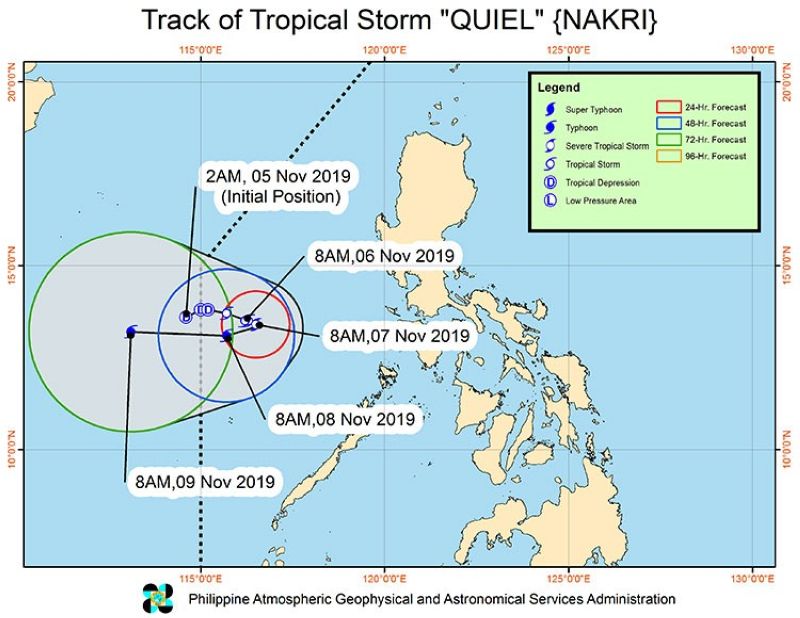 The Philippine Atmospheric, Geophysical and Astronomical Services Administration (Pagasa) said the center of Quiel was last spotted at 465 kilometers west southwest of Subic, Zambales as of 10 a.m. Wednesday, November 6.

Quiel has maximum sustained winds of 75 kilometers per hour (kph) near its center and gusts of up to 90 kph, said Pagasa.

The weather bureau said that between Wednesday and Thursday morning, November 7, Quiel and the tail-end of the cold front will bring light to moderate with occasional heavy rains over Babuyan Islands, Pangasinan, Zambales, Bataan, Occidental Mindoro, Antique, and portions of Palawan (Cuyo Islands and Kalayaan Islands).

Light to moderate with intermittent heavy rains will be experienced over Batanes, Apayao, Ilocos Norte, Aklan, Iloilo, Oriental Mindoro, and the rest of Cagayan and Palawan, including Calamian Islands).

It added that sea travel is risky, especially for small sea vessels, over the northern and western seaboards of Luzon due to potentially rough sea conditions.

Partly cloudy to cloudy skies with isolated rainshowers will be experienced by the rest of the country.

Meanwhile, Pagasa is also monitoring another powerful typhoon outside of the Philippine Area of Responsibility called "Halong".

Typhoon Halong was last spotted at 3 a.m. Wednesday at 2,985 kilometers east of extreme northern Luzon and was moving north northwest at 10 kph.

Halong has maximum sustained winds of 215 kph near its center and gusts of up to 265 kph. (EZN)