P13.7-M worth of hybrid seeds distributed to farmers 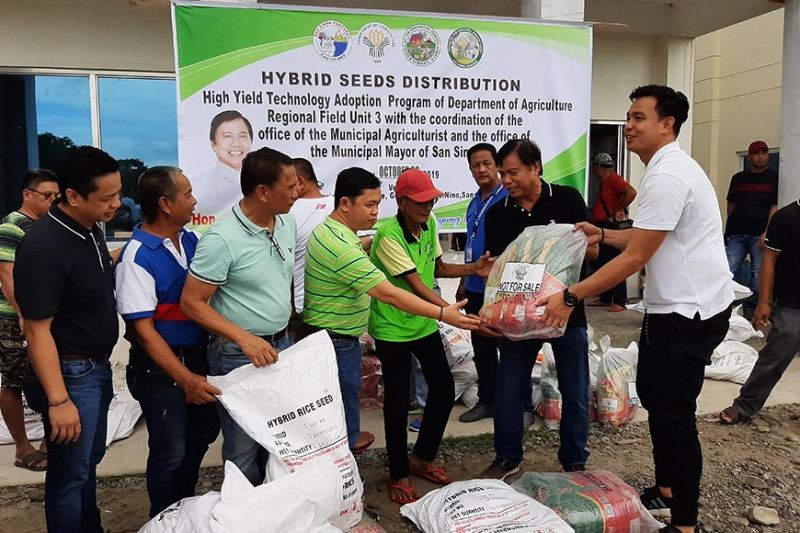 SAN SIMON -- With a vision to make the municipality food-secured in the next three years, the local government, in partnership with the Department of Agriculture (DA), distributed hybrid seeds to Simonian farmers recently.

At least 250 sacks of the seeds were given for free to farmers from the 14 barangays during the ceremonial distribution at the Local Government Center.

"Each sack contains 15 kilos of hybrid seeds that is valued at P5,500," said Mayor Abundio Punsalan Jr., who personally distributed the assistance to farmers.

Apart from the hybrid seeds, Punsalan said the local government also purchased farm tractors that can be borrowed by Simonian farmers whenever needed.

He said the program is in line with the priority programs of his administration that is to promote agriculture as a sustainable livelihood to Simonians.

"We are still considered as an agricultural town since more than 50 percent of our area is still dedicated for agriculture and we wanted to preserve it that way and become part of the solution to address food shortage in the coming years," he said.

He added that farmers must not also be forgotten as they are responsible for putting food into everybody's table each day.

Peter Marcelino, one of the beneficiaries, expressed gratitude to the local government for their initiative to assist farmers in town.

He said hybrid seeds provide bigger harvest compared to the ordinary seeds that are sold cheaper in the market.

"P5,500 per sack is valuable for us farmers. Instead of using it to purchase seeds, we can allocate it for other things needed by our families," he said.