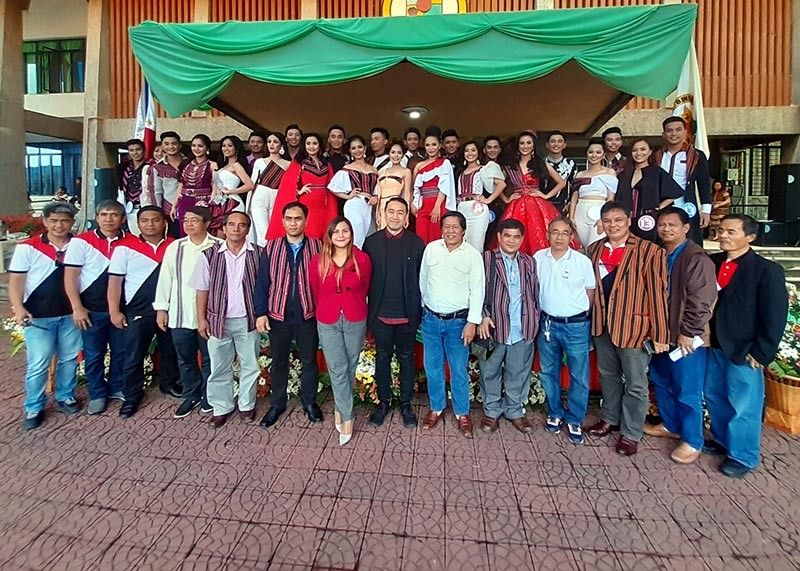 BENGUET. The 13 pairs of Mr. and Ms. Adivay in their casual attire with provincial officials and guests during the opening of the 2019 Benguet Adivay at Benguet capitol on November 6, 2019. Coronation night is slated on November 21 at Benguet Sports Complex. (Redjie Melvic Cawis)

PRAYERS and beating of gongs formally kicked off this year's month-long celebration of Benguet Adivay.

Governor Melchor Diclas formally declared the opening of the festival coinciding with the province's founding anniversary with an ecumenical service and pre-pageant for the Search for Mr. and Ms. Benguet at the Benguet capitol.

Adivay, an Ibaloi term that means "coming together," gathers all 13 towns of the province, with focus on the products and culture of every municipality.

"By the power vested in me, together with the vice governor and board members, today, November 6, 2019, I now declare the Adivay fest open," said Diclas.

Diclas thanked former leaders of the province for the progressive and peaceful and united Benguet.

More than 70 activities are lined up for the month-long celebration coinciding with the 119th foundation day of the province.

Highlight of the annual celebration is the grand cañao set on November 23 to ask for blessings from Kabunyan (god).

New events are also added, such as the mascot competition and float parade featuring the "one town, one product" of every town.

The mascots will be paraded November 18 and will be judged according to the use of eco-friendly materials and craftsmanship, while the float parade will be on November 23, followed by the main program at the Benguet Sports Complex in Wangal.

Another highlight is the agri-tourism fair, which will showcase 13 booths with products of each town on November 18 and the annual trade fair at Wangal that will run from November 10 to 24.

A Senior Citizen Adivay show is slated November 15, while the Benguet cultural dance performances are set on November 16 at the Benguet Sports Complex gym.

The final Mr. and Ms. Benguet pageant is slated on November 21 at the Benguet Sports Complex, followed by the 2019 Benguet Awards, which honors outstanding individuals and groups in the province set on November 22 at the Ben Palispis Hall.

Earlier, a medical, dental and surgical mission was held November 4 to 5 at the Atok District Hospital, while medical and dental services continue on November 19 at the sports complex covered court. It will be followed by a minor surgical health fair on November 20 at the Benguet General Hospital; oral health program and eye check-up screening on November 22 at Wangal; and the bilateral tubal ligation on November 25 to 26 at Kapangan District Hospital.

The festival will also hold several events such as environmental forum, small-scale mining congress, job fair, mass weddings, entrepreneurial skills competition and different sports activities. The annual fest will close with a Thanksgiving Day and employee's night on November 24 and 29, respectively, at the Ben Palispis Hall.