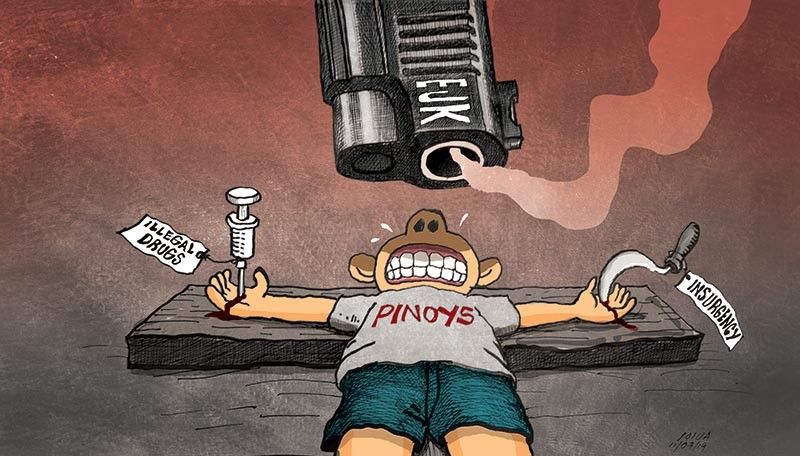 IF THIS officer Police Major Chuck Barandog, now picked as Cebu City Edgardo Labella’s peace adviser, thinks illegal drugs and insurgency are the top problems in our part of the earth, we have yet again another one who averts his eyes from the series of unsolved killings in our midst. Why do their kind insist on pushing that horror tale?

This is what he said lately: “I will give the mayor my input on how I can help. First, with the fight against illegal drugs. Second, with the fight against insurgency, particularly in Negros. If we do not address the insurgency problem in Negros, it will escalate to neighboring provinces like Cebu, Bohol and Siquijor. These three areas are tourist destinations. It’s important that we safeguard these areas in Central Visayas.”

So what could Barandog’s brilliant advice be as far as solving the drug problem is concerned? The former commander of the Cebu City Mobile Force Company will still be looking at the drug problem as a matter of law enforcement. As the saying goes, “The definition of insanity is doing the same thing over and over again and expecting different results.”

Three years deep into the all-out drug war, and it’s like government is doing a Sisyphean act of fruitless repetition. Remember the myth about the cruel Greek king who was made to push a boulder up the hill only to find it hurled back to the bottom when it approaches the top? Well, government itself admitted that it failed to kill what is merely getting stronger. So why perpetuate the stupor? Why wage the same tack when clearly you’re losing the war?

Barandog also thinks insurgency is a thing to be worried about, again in our part of the world. Most likely, he’d still be coming from the singular view that quelling insurgency means an assault in full battle gear. Come to think of it, all those that authorities have either arrested or killed in Negros Occidental, whether they were truly armed or not, only bear resentments over their impoverished state, their helplessness against land-grabbers, among others. It’s that elementary; you don’t need to be genius to understand that. That is certainly not beyond comprehension for a supposed chairman of a Regional Peace and Order Council.

So what is Cebu’s biggest problem? It is that anytime now, a drove would suddenly surround you in broad daylight, in the middle of traffic and liquidate you to kingdom come. It is that the series of killings in our streets remain unsolved to this day, and that we continue to get these inane explanations from authorities with nary a concern for clarity.

We wonder what’s Labella’s preference for peace advisers. And we still wonder why he thinks Cebu is a safe place. Where is he coming from?