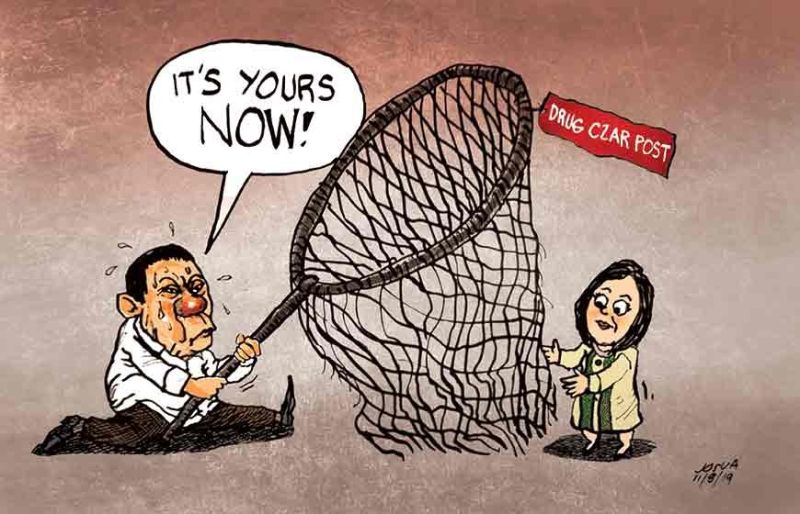 CZAR is a wrong term to use for Vice President Leni Robredo, who accepted President Rodrigo Duterte’s offer for her to co-chair the Inter-Agency Committee on Anti-Illegal Drugs (ICAD). “Czar,” as the dictionary would put it, implies “great power and authority.” A co-chairmanship in a committee headed by the Philippine Drug Enforcement Agency (PDEA) and composed of representatives of 20 government agencies don’t really give Robredo “czar” powers.

These agencies are divided into four clusters that focus on four major functions: enforcement, justice, advocacy and rehabilitation and reintegration. It’s the PDEA that has the overall responsibility to ensure that the clusters accomplish their objectives.

The political view was that Robredo just fed herself into a “trap” when she accepted the offer. It is designed to destroy her right from the start. Robredo, of course, isn’t one who worries about her political career; she was anyway thrust into power by circumstances and not by ambition. In accepting the offer, she said she is only taking her chances to save lives in the government’s drug war. Who can argue with that?

The ICAD actually takes much of its actions from the National Anti-Drug Plan of Action (NADPA) 2015-2020, a plan developed by the DDB, under the administration of then President Benigno Aquino III.

The NADPA 2015-2020 is a comprehensive document that reviewed the government’s fight against illegal drugs for 10 years (2002-2012). One of its conclusions stated thus: “The war against drugs is no longer merely a law enforcement concern. The Board has recognized that the development and dissemination of drug prevention programs and activities have increasingly become essential in dealing with this problem as these measures make the people aware of the lure of dangerous drugs and other addictive substances.”

The DDB noted that since the enactment of the Comprehensive Dangerous Drugs Act of 2002 (RA9165), there was a significant decline in the estimated number of drug users. There were 6.7 million drug users in estimate in 2004, but the figure went dramatically down by 2008, at 1.7 million. In 2012, there were an estimated 1.3 million drug users. RA 9165 strengthened the war against illegal drugs with harsher penalties for drug offenders.

The NADPA 2015-2020, however, identified weak points and special cases in the drug war. Local government units were lukewarm in implementing anti-drug programs and there was little funding to see through rehabilitation and reintegration programs. Also, since 2002, authorities found that 66 percent of the arrested personalities from the dismantled shabu laboratories. In 2003 and 2004, 11 illegal laboratories were dismantled.

As Robredo joins the ICAD, the government’s drug war carries with it the mess of over 5,000 dead, as per Philippine National Police records. This is for the first half under the current administration, which admits that the illegal drug trade is in fact still gaining strength.

We can’t wait to see how the Vice President, now seated with the powerful anti-drug body, will wage her version of the war.