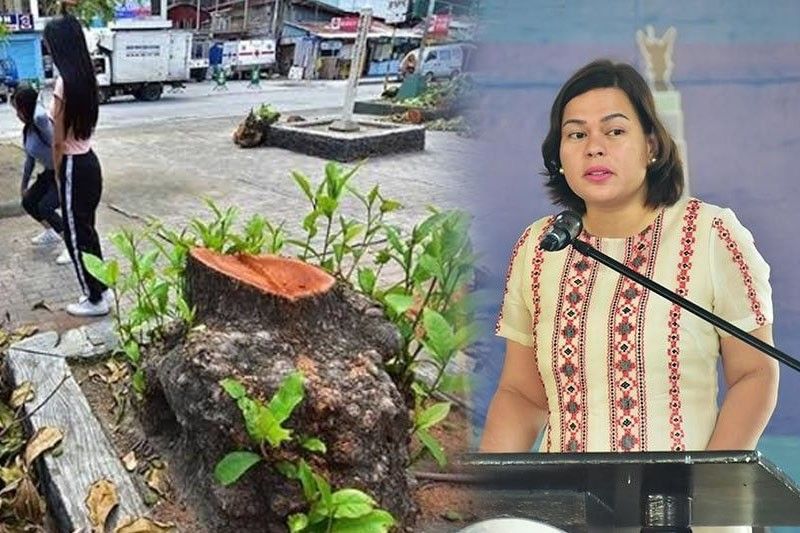 DAVAO City Mayor Sara Duterte-Carpio has issued a public apology for the cutting of trees in Clifford Park, saying it was to give way for the rehabilitation of the park.

In a statement issued Thursday, November 7, Duterte-Carpio admitted that she approved the design for the rehabilitation of the park, but it was not her intention to also have the trees at the park cut down.

She said the City Government of Davao intended to rehabilitate Clifford Park "to accommodate more people and enhance its tourism and recreational values."

"I approved the proposed design and assumed that the project will build around the trees. However, it has come to my attention that several trees were felled down as park rehabilitation progressed," she said.

She added, "My mistake was not to solicit an explanation on the park design as I quietly assumed that no trees will be taken down."

Around the last week of October, the trees in Clifford Park, located along Roxas Avenue, were cut. Environmental advocates questioned the cutting of the trees. This area of Clifford Park that is fronting the post office is known to be a go-to place for students to practice. According to Interfacing Development Interventions for Sustainability (Idis) founder Arnold Vandenbroeck, the center island park is the most visited in the city.

"I sincerely apologize for the oversight and commit to plant trees in the park, incorporating it to the new design," the mayor said.

She vowed to carry out more green initiatives to help in environment conservation.

"We also commit to carrying out more programs to establish rural and urban green spaces, promote ecological balance, sustainable utilization and management of resources, and to continue raising public awareness of the importance of environmental protection," she said.

Idis executive director Chinkie Peliño-Golle in a statement Thursday, November 7, commended the mayor for taking responsibility for the felled trees.

"It usually takes courage and humility to declare that a politician/government official is accountable for the mistake, especially violation of the environmental law which is very clear in the case of clearing the Clifford Park [sic]," she said in a message.

Peliño-Golle said apart from a public apology, they also expect that the Office of the City Mayor will identify and give sanction to whoever ordered or administered the actual cutting of trees.

"It's a shame that he/she/they violated the law by not complying with the required cutting permit and by not consulting/informing the public early. It's a shame that whoever did it has been very quiet," Peliño-Golle said.

Meanwhile, she said they expect the immediate rehabilitation of the park by planting grown-up trees (not seedling) at the Clifford park and all other parks in the city, including other public and green spaces.

"The Clifford Park should be renovated as fast as they can with more greeneries, permeable pavements, lead-safe paints and to ensure it will be functional and accessible to the public," she added.