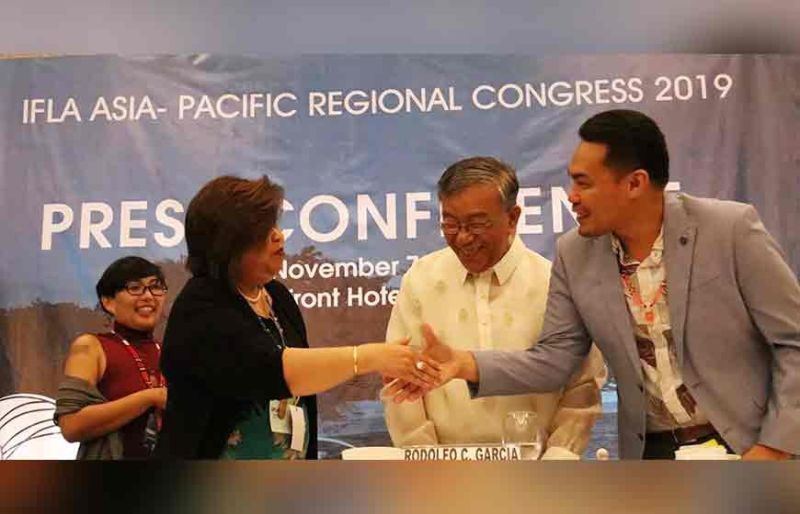 PRESS CONFERENCE. Corazon Davies, assistant secretary for policy and planning services of the Department of Environment and Natural Resources (DENR), shakes the hand of Eric Estonido, president of the Philippine Association of Landscape Architects, while DENR Undersecretary Rodolfo Garcia and Rosanne Marie Aldeguer (left), chairperson of the 2019 Ifla Asia Pacific Regional Congress, look on. The DENR and Pala will be working together to implement green networks around the country. (Sunstar Photo / Amper Campaña)

DESPITE several objections, seven trees along the highway in the City of Naga will be cut to pave the way for a road-widening project in the area.

In Naga alone, 32 trees will soon be felled, most of which are mahogany, gmelina and acacia.

“We hired pathologists and they were the ones who recommended to have them cut since these are dying trees,” said Eduardo Enting, technical director of the Department of Environment and Natural Resources (DENR) 7.

He said these trees are dying or are disease-ridden and they pose a hazard to motorists.

He clarified that century-old trees, or heritage trees, will not be affected by the operation.

On Oct. 15, 2019, members of an environmentalist group staged a rally in the southern city to protest plans to cut the trees.

“In Cebu, some trees will be affected by road widening. There is necessity to expand the road network because traffic is going to be difficult just like in Metro Manila. There is a need to ease the life of the people,” said DENR Undersecretary Rodolfo Garcia during the 78th International Federation of Landscape Architects (Ifla)-Asia Pacific Region at the Waterfront Cebu City Hotel and Casino.

“It is always a challenge. We have our pragmatic needs. Nature is important and development is also important. It has to be balanced,” Garcia said.

For her part, Corazon Davies, assistant secretary for policy and planning services of the DENR, said they conducted a study before they gave the green light to cut the trees along the southern highway, especially it concerns the century-old trees.

“The DENR has a program to preserve century and heritage trees. When we cut trees, it is always based on science,” Davies said.

She said they can always plant new ones, adding that trees are “renewable resources.”

“When there is traffic, there’s less productivity. When you get stalled because of traffic, there will be more pollution. There is a need to cut trees and you just have to find open spaces where you can plant new ones,” she said.

The DENR has forged a partnership with the Philippine Association of Landscape Architects (Pala), with the latter helping the agency plan its programs so that the country’s landscape and seascape will flourish.

“This partnership will bring in the greening of the landscape. In establishments like shopping centers or buildings, you will now begin to see green buildings,” Garcia said.

“We are here to help control and recommend developments that are less disruptive but huge in impact,” Estonido said. HBL / PJB