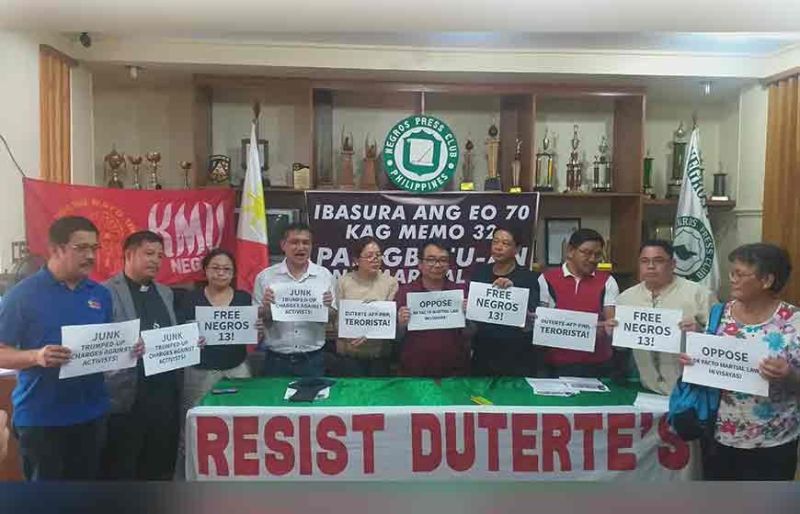 BACOLOD. Progressive group leaders and members of the National Fact-Finding and Solidarity Mission call on the government to stop the alleged full national crackdown against critics and activists as they claim victory over the release of their 32 arrested members during the press conference at the Negros Press Club in Bacolod City. (Photo by Erwin P. Nicavera) 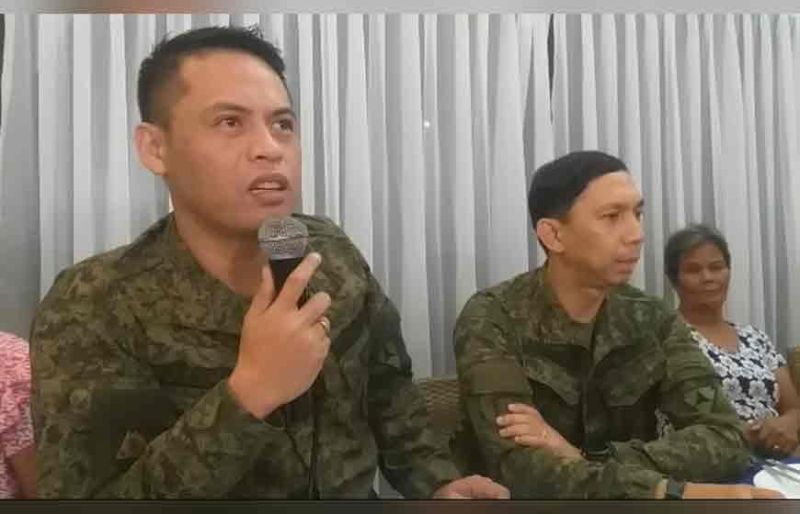 FOR the national leaders of various progressive groups, the release of their 32 local member-activists recently arrested in series of operations at different offices in Negros Occidental is a victory.

Defend Negros convenor Ariel Casilao, in a press conference at the Negros Press Club in Bacolod City Thursday, November 7, said aside from freeing those “illegally” arrested, the incident had not paralyzed the activities of the “attacked” organizations.

Casilao said they claim triumph as they were able to show how foolish the government forces are, and how weak the harassment they have done to the progressive group members.

“We will not let this pass without a fight, we will hold them accountable,” he said, adding that “legally, we are confident that the remaining 11 detained leaders of our organizations will be set free.”

On Wednesday, November 6, the Bacolod City Prosecutor’s Office ordered the immediate release of 31 individuals for lack of probable cause on the charges for illegal possession of firearms and explosives filed against them.

They form part of the 55 personalities arrested in search operations in cities of Bacolod and Escalante particularly at the offices of Bagong Alyansang Makabayan (Bayan), Kilusang Mayo Uno, Anakpawis, Gabriela and National Federation of Sugar Workers, and a house of a member last October 31.

Authorities were not able to include in the filing of cases one arrested member as he was initially believed to be a minor. Only 31 charges were dismissed, the military said.

Also, six of them were charged of qualified human trafficking.

Bong Labog, national chairman of Kilusang Mayo Uno, said the release of the arrested members is a huge victory that resulted from solidarity among various sectors.

“It’s a morale booster for us,” Labog said, expressing confidence that it will be a precedence to the release of 11 detained members and leaders.

For Bayan Muna Party-list Representative Carlos Zarate, who was also at the press conference, this is the victory of the people.

The national progressive group leaders, who are members of the National Fact Finding and Solidarity Mission, further claimed that, with such development, the government forces failed to silent the critics of the administration of President Rodrigo Duterte.

Pancito said from the very start they have made their efforts within the legal boundaries.

“Any decision that the fiscal has rendered is respected as it is the rightful office rested with the authority to determine if indeed there is a probable cause,” he added.

The military official said the dismissal of the charges against the 31 members has not weakened the case. The fiscal’s rule is that these people are incidental to the commission of the crime.

Pancito said the fact still remains that there is crime committed, illegal possession of firearms and explosives.

“The challenge is still there, why a crime was being committed at said premises or location,” he said, adding that “let us not change our perception because the truth is there’s a crime and they have lots of explaining to do.”

Colonel Benedict Arevalo, commander of the 303rd Infantry Brigade, argued on the group’s claim that authorities failed to silent activists and critics of the government.

In the bid to hold government forces liable for the arrest of their members, the progressive groups are preparing for the filing of counter charges against the military and police personnel.

Negrense human rights lawyer and activist Neri Colmenares, also the former Bayan Muna Party-list representative, said while they are working on the release of the remaining detained members, the groups are also making sure that there are counter charges.

Colmenares said there’s already a resolution in Congress to investigate the “mass arrest” in Negros Occidental.

“Counter charges will vary including planting of evidence, illegal machination and malicious prosecution, among other cases that fall under the Revised Penal Code,” he said, adding that there are also specials laws under Anti-graft and Corrupt Practices Act.

The cases against generals and colonels will be filed at the Ombudsman. They will also be included on the filing of cases for violation of Republic Act 9851 for persecution and crimes against humanity and also Anti-torture Law, Colmenares said.

The counter charges will also cover the involved including the justices and prosecutors and fake witnesses, he added.

Responding to this, Arevalo said “now na [do it now].”

For the 3rd ID, Pancito said they welcome the move to file counter charges against state law enforcers.

“This will likewise give the chance for us to present our side to the proper court,” he said, adding that “we hope these group will follow the same of facing the charges in proper body.”

Moreover, Bayan spokesperson Teodoro Casiño said the recent incident has caused apprehensions among national organizations because this is first time that a “mass arrest” happened since martial law.

With this, Casiño said, Negros is apparently becoming a laboratory for a full national crackdown against activists and critics of the government.

“This is an urgent situation,” he said, adding that it has to be stopped so it won’t happen in other areas in the country.

Pancito, however, said there’s no national crackdown. “These groups are just hallucinating.”

“As long as crime is committed, we will do our task of maintaining peace and order,” he added.

Aside from the alleged forcible entries, planted evidence and maltreatment, the group claimed that based on their two-day fact finding mission until Thursday, all search warrants came from a search warrant “factory” in Quezon City.

Seven of which were served in Negros Occidental. Of which, four in Bacolod City and three in Escalante City.

Two other warrants were served in Manila.

“We are still looking for the two other search warrants,” the progressive group leaders said, as they continue to slam government forces for “this is nothing more than a crackdown on the oppositions and dissenters disguised as a counter insurgency operation.”

But for the army, “the people have spoken, if indeed they are truly for the people then they should head on the call to end insurgency,” Pancito said.