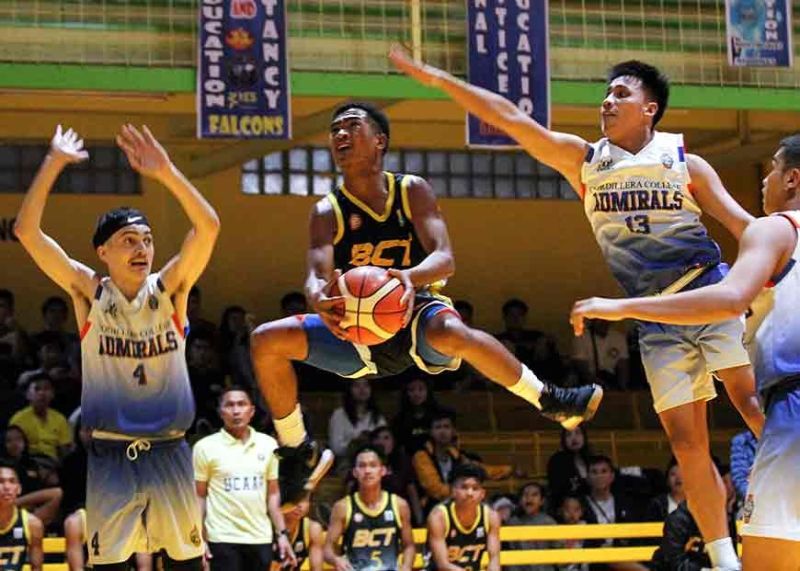 CORDILLERA Career Development College Admirals started strong and finished with a flare to move into the next phase of the step ladder semis format after upending Baguio College of Technology Atoms, 92–79.

The season 33 host of the Baguio – Benguet Educational Athletic League (BBEAL) waxed hot early in the first quarter scoring four out of the eight triples and move on the next phase of the semifinals of the men’s basketball at the CCDC gym Thursday evening, November 7.

With five players scoring in double digits, the Admirals erected a 22–13 lead at the close of the opening canto and never looked backed enjoying a 19 point advantage at half time, 49–30.

Down by 10 at the end of the third quarter, 63–53, the third seeded Atoms would not just go down without a fight as it slowly inched their way back in the ball game with timely threes in the pay-off period and came within six, 72–66, with 6:40 remaining led by Elijohn Serapion who fired away two triples of his eight point during their run.

CCDC however countered with a 9 – 3 run to restore a double digit 81–69 lead with 3:54 remaining in the ball game and was never bothered until the final buzzer.

CCDC athletic director Eduardo Laureano and coach Jun Rimando said the team was able to pull through despite having 11 rookies and four sophomores.

John Russel Tuazon led the Admirals charge with 13 as Will Keane Lee, Jamil Remiendo and Jocas Bautista contributed 12 apiece even as Menard Ugalino came up with 11 markers.

The Atoms stayed closed late in the fourth period with five triples but their effort went to naught despite Serapion’s big game who lead the scoring with 24 points.

Anthony Angeles added 14 points for the Atoms after fouling out with 4:57 remaining while Lito Villanueva and Daryll Ian Torio chipped in 12 apiece.

The Admirals squares off next with second seeded University of the Cordilleras Jaguars who will enjoy a twice to beat advantage on November 11 at the UC gym which starts 4 p.m.