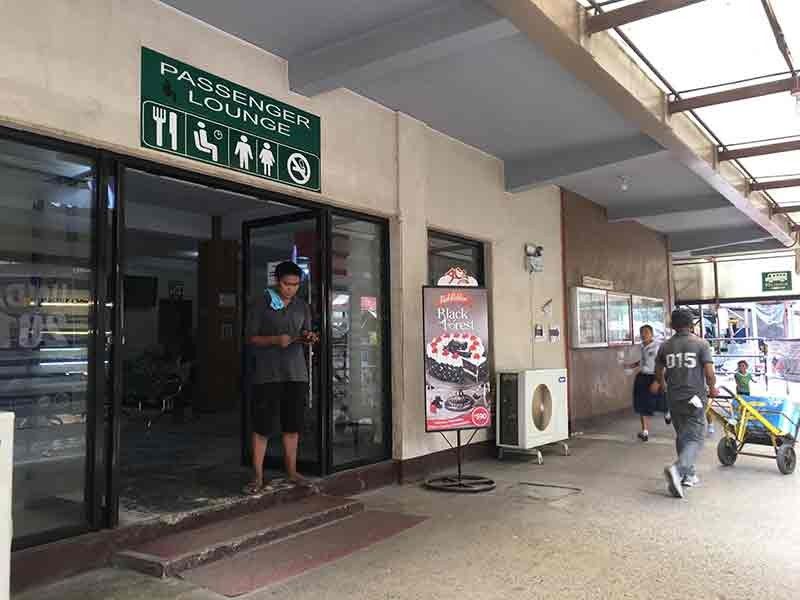 DAVAO. Cracks on the beams of the Davao City Overland Transport Terminal (DCOTT) passengers' lounge were found by the City Engineer's Office (CEO) during its initial assessment. Based on the CEO's report, DCOTT was among the 17 public establishments reported to be unsafe for occupancy. (Roberto A. Gumba Jr.)

THE Davao City Overland Transport Terminal (DCOTT), which was among those assessed to be unsafe for occupancy, has yet to receive recommendation for repair from the City Engineer's Office (CEO).

The report, which was released Wednesday, November 6, stated, "Minor cracks on the Administration Building and surface cracks on the slabs on the second floor of the passenger's lounge. Most pedestals along the southbound lane were damaged while steel trusses embedded to the pedestals are partially damaged due to rust and not safe to carry load."

In an interview with SunStar Davao on Thursday, November 7, CEO officer-in-charge Joseph Dominic Felizarta confirmed the presence of cracks in some parts of the passengers' lounge.

But the recommendation has not yet reached DCOTT manager Aisa Usop.

Usop said she has not received any advice following the ocular inspection she has requested after the earthquakes, that is why the terminal, which caters to about 30,000 to 35,000 passengers on normal days, continued its operation.

"There was no advice to us nga muingon nga dili na safe or the building is no longer capable for occupancy. Wala pa koy na-receive nga report (We have not received any report yet)," Usop told SunStar Davao in an interview.

She said the City Transport and Traffic Management Office (CTTMO) did not receive any recommended action regarding the status of the terminal.

"I have also called Colonel [Dionisio] Abude because the DCOTT is under the CTTMO. I also asked him if there is an advice to him regarding ginaingon nila nga unsafe. Natingala pud siya kay wala pud daw siyay advice (He also did not receive any advice)," she said.

Usop said their office needed the document so they can request for a budget in case the terminal facilities will be recommended for repair.

"Kung kailangan nga i-repair, dapat mag-advise pud ang City Engineer's nato. We have to repair that [and] para makapangayo gyud ta og budget for that (If it needs repair, the City Engineer's must advise us so we can ask a budget for its repair)," she said.

Felizarta said while they usually send recommendations immediately after the assessment of the affected building, he said his office is prioritizing schools that were heavily damaged.

"Pag tan-aw namo nga safe na, wala pa mi nagpadala og report. Dili na namo maapas (If we see that the establishment is safe, we did not send them a report. We cannot furnish them all at once)," he said.

"Ang among ginauna mga eskwelahan nga tag 2, 3, 4 storys, mga lagyo ug kaning mga diri (We prioritized the schools with 2 to 3 storys, those in the far-flung areas and those which are near)," he added.

On Thursday afternoon, November 7, Felizarta ordered his staff to notify Usop on their recommendation for the immediate repair of the terminal facilities.

He said the building is safe for now, unless it will not be repaired. The CEO is continuously conducting inspection along with the Structural Engineers Association of Davao Inc. (Sead).

On Thursday, Sead certified that Toril Public Market Building and the Felcris Centrale as safe for occupancy based on their inspection on October 29.

Sead's inspection revealed that several stalls at the fish section in Toril Public Market have collapsed and were recommended for demolition based on the initial assessment by the CEO. But in totality, the public market is still structurally safe for occupancy.

The Building Management Team of Felcris Centrale was advised by the Sead to avoid using its front fire escape stairs until repaired.

Other public establishments that were declared by the CEO as unsafe are the City Social Services and Development Office building, Armed Forces of the Philippines Learning Center in Panacan, second building of the Philippine Coconut Authority, and Barangay Hall of Mudiang.