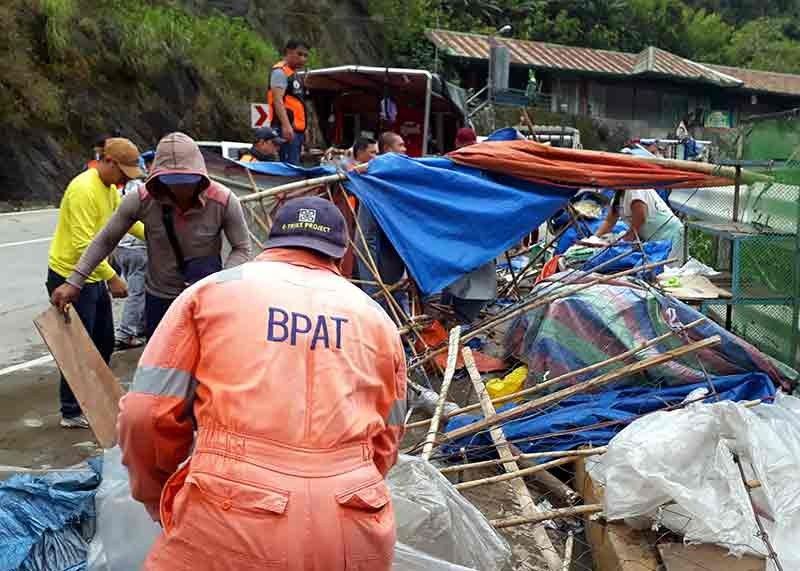 BENGUET. Twelve stalls were again demolished and items were confiscated at the right side of the iconic Lion’s Head along Kennon Road on Wednesday, November 7, in an operation ordered by Mayor Benjie Magalong. The stalls had been removed several times in the past but errant vendors kept on rebuilding. Three more stalls will be removed once the demolition order is issued. (Contributed photo)

LA TRINIDAD, Benguet -- A proposed resolution passed in Benguet is asking the Department of Public Works and Highways (DPWH), the Office of the Civil Defense (OCD) and other concerned agencies not to close Kennon Road for the next three years.

Board Member Nestor Fongwan Jr., proponent of the measure, said the DPWH, OCD and other concern agencies agreed with the proposed three-year closure of Kennon in the province for its rehabilitation. However, they have established a clamor from affected residents, barangay and municipal officials to open the vital road network.

Kennon Road, built under the leadership of US Army Officer Lyman Kennon, is currently closed to traffic but open for residents only after “Task Force Kennon” said the closure serves as precautionary measure for the historic highway which is under the threat of land and rockslides caused by previous typhoons and the inclement weather.

DPWH Cordillera director Engineer Tiburcio Canlas on Tuesday, November 5, said data, as concrete basis, is needed for further discussion on the closure of the 34-kilometer road.

“We have to balance the safety and the needs of the people,” he said, adding he asked DPWH for initial P25 million fund for the conduct of the comprehensive feasibility study which will gather the national road’s closure effect on the social, economic aspect.

Engineer Ireneo Gallato, DPWH Benguet First District head on Tuesday urged traveling public to be extra careful especially those who are not aware of the real characteristic of the road.

Gallato added their main concern is the ongoing infrastructure projects and maintenance of the road from Camp 1 to Camp 6.

Romy Salinas, village chief of Camp 4, 5, and 6 in Kennon, added the indefinite closure of the road affected the students and different sectors in the transportation of their goods.

To recall, Baguio City Mayor Benjamin Magalong earlier suggested for the three to five years closure to aid the 34-kilometer road to heal and stabilize risk of continuous soil erosions. He made the remark following an onsite inspection on the road on the third week of August.

The chief executive said the national road should naturally heal and let the loose soils fall and stabilize before the rehabilitation works.

Fongwan Jr. concluded they are pushing through with the proposed measure adding in order to have win-win solution on Kennon’s closure, there should be cooperation of all agencies as residents are open to conditions including closure of the historic road during rainy season.

This story was produced under the Road Safety Journalism Fellowship carried out by VERA Files and the World Health Organization under the Bloomberg Initiative for Global Road Safety.