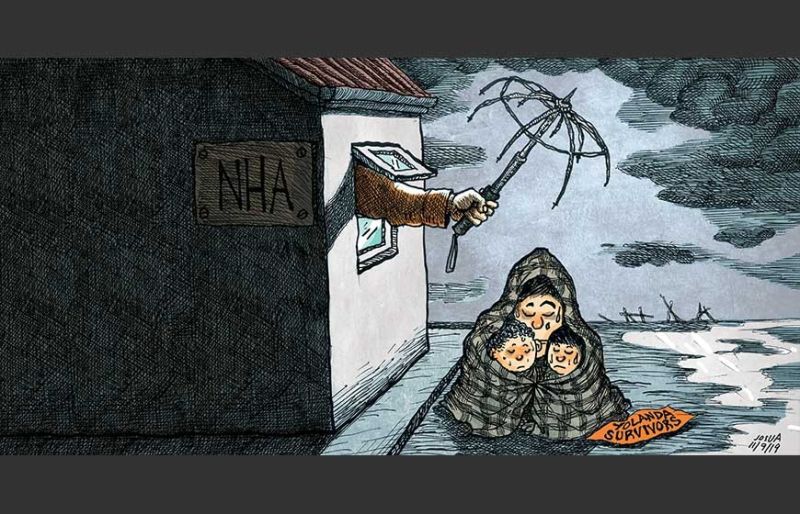 IT HAS been six years since super typhoon Yolanda devastated parts of northern Cebu and Eastern Visayas. Yet the National Housing Authority (NHA) hasn’t even completed half of the houses it was tasked to build for survivors.

In other words, the NHA has finished building only 6,350 houses, not all of which have been turned over to beneficiaries due to the lack of water and electricity supply.

Some affected local government units, towns like Bantayan, San Francisco, Poro, Pilar and Tudela, have even asked the agency to cut down the number of houses allocated to them to make up for the rising cost of building materials and whatnot.

“We said that this number of houses can no longer be accomplished because of the increased price of labor and materials,” said Bantayan Mayor Arthur Despi.

The mayor was quick to point out that the NHA failed to factor in the almost 1,000 houses built by nongovernment organizations like the Gawad Kalinga and the Habitat for Humanity.

It’s amazing how private entities could accomplish so much in the same given time, considering they don’t even have the advantages of the NHA, which is a public institution.

So now, after all this time, the NHA will coordinate with other agencies to secure clearance and building permits. It has also considered taking up the “township approach” to deliver basic housing utilities and facilities.

Thousands of families were displaced after losing their homes to super typhoon Yolanda. The problem was immediate. So it doesn’t make sense for the NHA and other concerned agencies to take six years to untangle themselves from the bureaucratic red tape so they can finally help the survivors, which must be why the NHA has vowed to finish 14,527 houses by the second quarter of 2020, or less than 12 months from now.

As they say, “better late than never.”