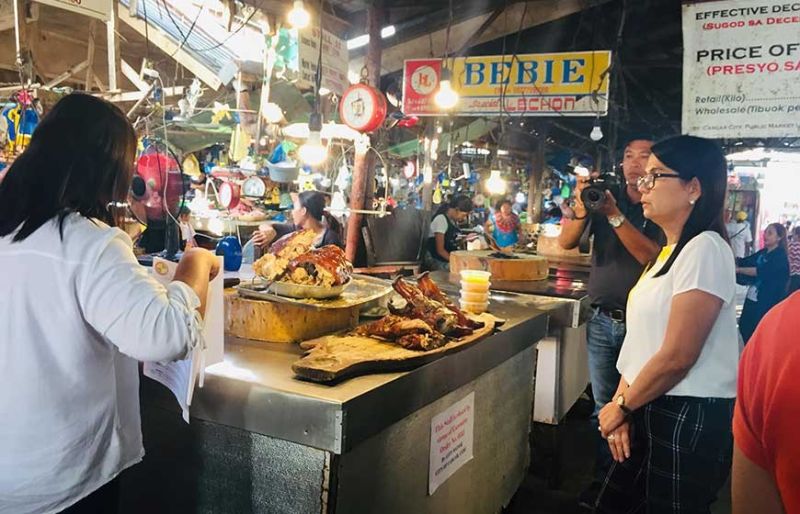 CLOSED. Carcar City Mayor Mercedita Apura (rightmost) visits the public market to close down four lechon stalls that have shortchanged their customers and have failed to secure permits. (Jonreil Traya)

Two of the lechon stalls were the subject of the complaint of would-be buyers who had narrated on Facebook their upsetting experience with the lechon vendors.

Ordered closed on the strength of Apura’s Executive Order 055 were the stalls of Mercy Roel, Honeylette Navaja, Arlene Manreal and Loreta Camanero.

The operators of the four lechon stalls were found to have been lacking mayor’s and sanitary permits, using inaccurate weighing scales, peddling and hawking by sales attendants in the passageway, and selling leftovers or reheated lechon.

Apura told SunStar Cebu in a phone interview that she did not want the lechon situation at the public market to get out of hand. That’s why she decided to go to the market and personally serve the closure orders within the week the complaint got viral.

The Facebook post has gone viral and many comments were about the customers’ bad experiences with the lechon vendors at the Carcar City Public Market.

Apura said she issued EO 055 after she had the facts of the investigation conducted by the city market administrator and city legal officer.

She said the closure of the stalls of the errant operators is the first step to getting back the trust of the lechon buyers.

She will meet with the other lechon vendors to discuss how to improve their selling methods.

When she served the closure orders, she said, she asked for their understanding.

She had to “sacrifice” them “to save” the other lechon vendors who have been complying with market and food standards of Carcar City.

She said the errant lechon vendors cannot fault her for issuing the closure orders because they have been shown to have fallen short of the requirements and standards imposed by the Carcar City market administration.

Apura ordered all stalls in the public market to be checked for their business permits.

With the mayor during the closure of the stalls were the market supervisor, legal counsel, building administrator, police, traffic supervisor and health officer. (JCT/MPS)