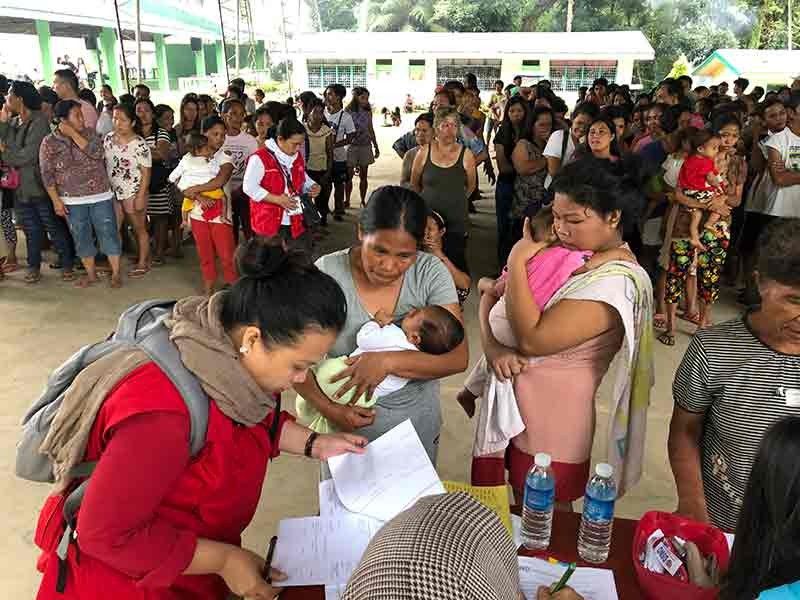 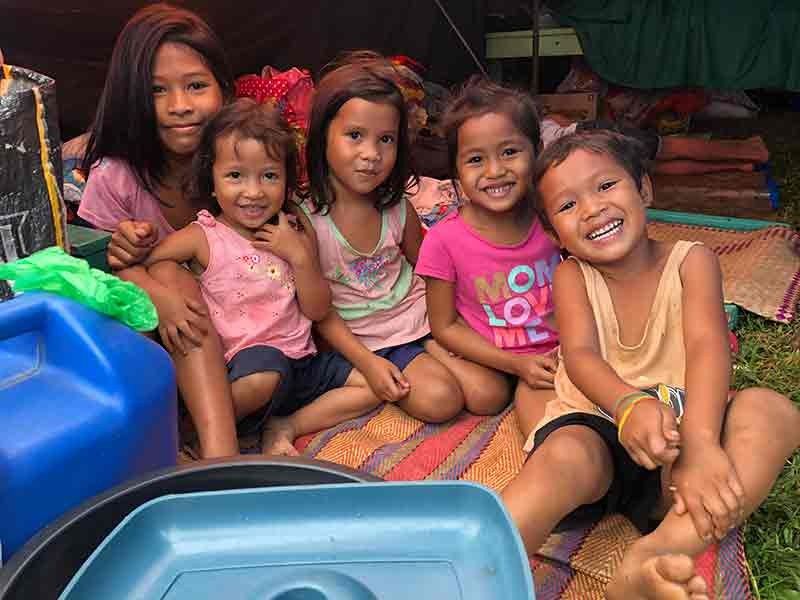 COTABATO. Children smile inside the tent at the Makilala evacuation center. (Photo by Jeepy P. Compio) 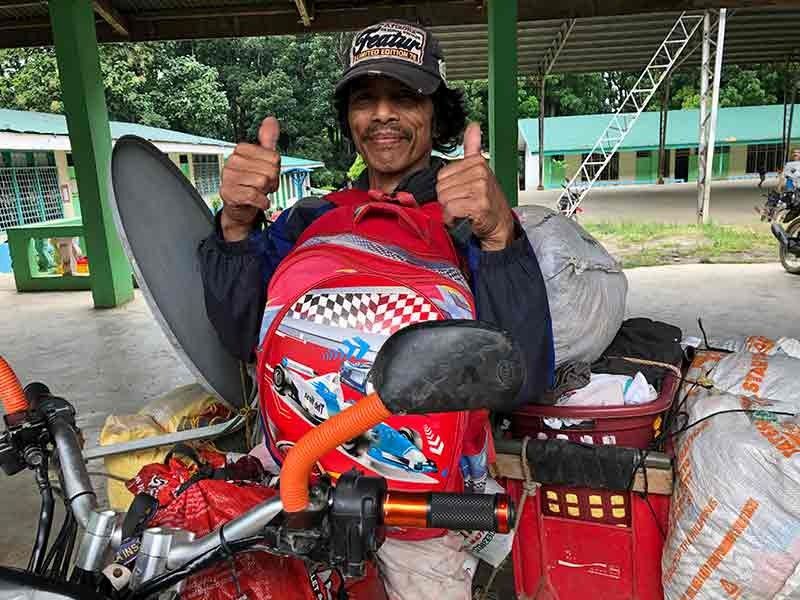 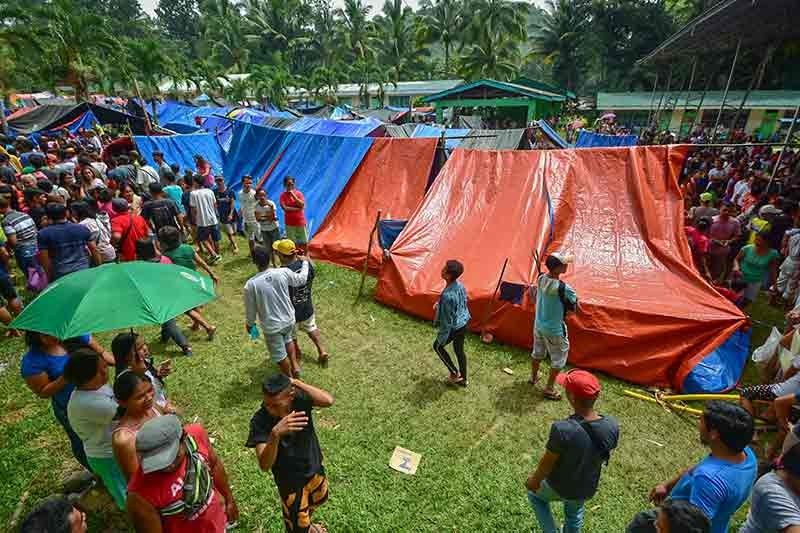 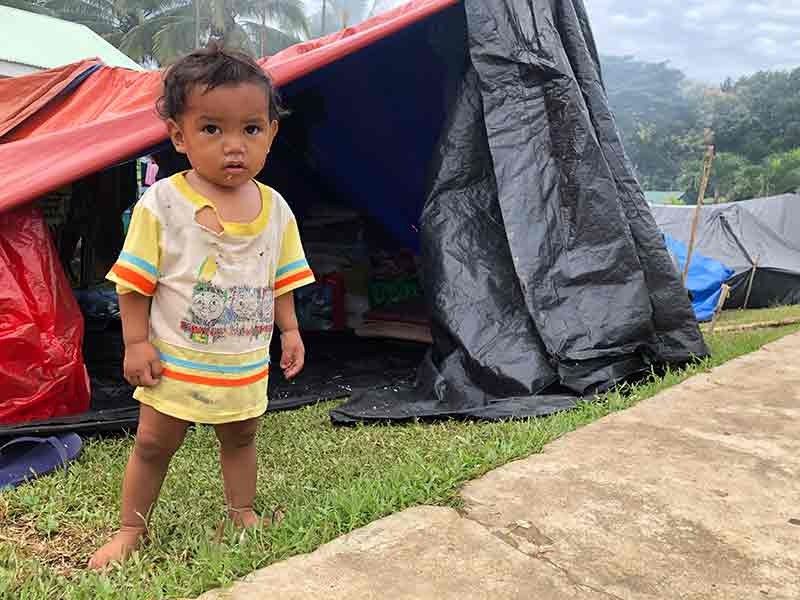 COTABATO. A little boy waits for his mother who queued for relief goods. (Photo by Jeepy P. Compio)

MAKILALA, COTABATO - Residents of Barangays Luayon and Kapatagan, together with their small children and elderly, fled to safer grounds when the magnitude 6.6 earthquake struck around 9:10 a.m. on October 29, 2019.

That day was like a nightmare for the residents, who still tremble in fear, as their homes, properties, livestock and even livelihood were lost in just a very short time.

Their fears were aggravated when a portion of the mountain in Makilala crumbled, the ground cracked and tremors continued.

"Di na gyud mapuy-an among dapit, sayang kaayo among mga pangandoy sa kinabuhi, naguba na among kamaisan, gumahan, nangatumba tanan, mao nalang baya to ang among gisaligan aron makahuman akong tulo ka mga anak nga nag-eskuwela karon sa koliheyo sa Kidapawan (We cannot go back where we used to live. Our dreams are gone after our farm was destroyed by the earthquake. We rely on the farm to send our three children to college in Kidapawan)," said a teary-eyed Merlyn Ybanez, 46, farmer.

Merna Pablo, 42, still cries whenever she recalls how they had to evacuate on the evening of October 29. She glanced at her very young children - a four-month-old infant, four-year old son Kyle John, and six-year-old daughter Maricris – as she narrated their ordeal.

Barangay Luayon was one of the severely hit areas. No structure was left standing d after the calamity. Government troops in a chopper immediately responded to rescue the victims.

Most of the victims were airlifted to safer grounds which now serve as their evacuation site.

The Malasila evacuation center houses 1,749 families already. The number is taken from the barangays around the "ground zero".

Problems at the evacuation center

One of the problems at the evacuation center is the lack of water and comfort rooms.

Dumoy Water from Davao City along with the local governments of Makilala and Kidapawan City, are donating water. However, these are still inadequate.

"Naay C.R, ipagamit man sa school principal pero lagi dapat naa gyod tubig nga dalhon, mao bitaw ako gyod nagbantay ani, kay kung dili ni bantayan, magbara ni diri. Nang-reklamo na gani ang uban kay sa likod sa mga classroom daghan kaayo og hugaw sa tawo, mao nang paghangin hastang baho-a gyod (The shool principal has allowed the use of the CR but you have to bring your own water. I am watching over the CR because if I do not, the toilet will clog. There are already complaints by some evacuees of the smell of feces because some are defecating at the back of the classrooms. When the wind blows, it carries a really bad smell)," Helen Quinones, 55, said.

Also adding to the problem is instilling order during relief goods distribution, especially when these come from groups of individuals.

"Luoy kaayo tong dili abtik, dili na gyud makabahin, maro-maro sab ang uban kay ang ilang mga bana didto na nag-atang sa gate, mao nang pag-abot sa hinabang sila nalang perme makakuha, magbalik-balik. Mao bitaw, gi-meeting nami sa among kapitan nga kung dunay maabot, ibutang sa usa ka lugar, dayon bahinon sa tanan (Those who are slow may not get their share. Some are also cunning. Their husbands wait at the gate for those who are bringing relief goods and would return for more. Our barangay captain have met with us and told us that if there are relief goods it would be brought to one place for proper distribution)," Marcelina Recamante, 51, revealed.

The evacuees are now getting sick because of the condition there which is not suitable especially for babies, children, sickly, and the elderly.

Still positive despite it all

Bertoldo Morales, farmer, still carries his pair of chickens, a pair of goats and his dog hoping that these will multiply someday.

Gerlyn Nenaria, 40, continued with her sari-sari store at the evacuation site, as her husband was able to save some of the items in their store. The items were loaded onto a horse.

Challenge to the local government

The evacuees are allowed to stay at the site only until November 11, 2019 to give way for the students. Classes are set to resume Monday.

Meanwhile, there was an outpouring of donations coming from different firms, groups, individuals and different local government units in the country to help the victims.

With the Filipinos' resiliency amid disasters and unity and cooperation, victims of calamities are still able to laugh, to smile, and to be hopeful for a new day.