Suspension on pickup back riding ban being studied 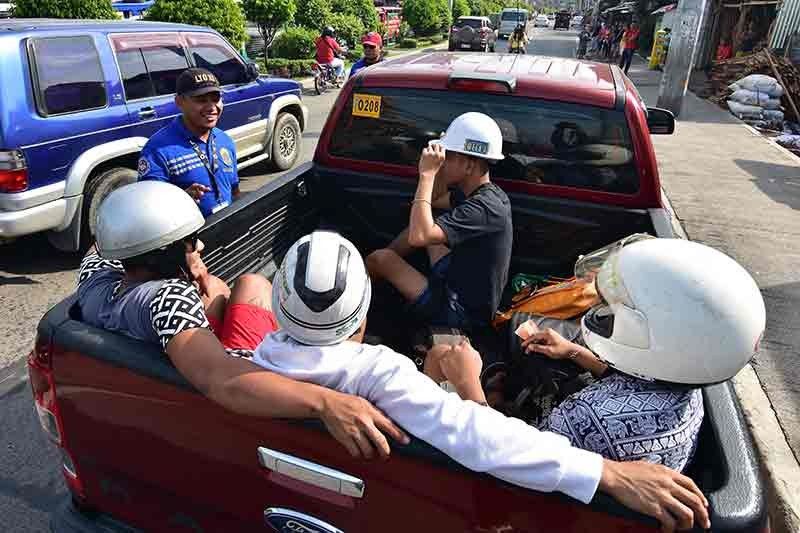 THE Land Transportation Office (LTO)-Davao clarified that the request to suspend the prohibition on riding at the back of a pickup truck or any pickup-type vehicles is still being studied by the LTO head office.

LTO-Davao Director Gomer Dy said Monday, November 11, that the resolution filed by Councilor Conrado Baluran, committee on transportation and communications chair, that was approved by the 19th City Council last October 20, is still being reviewed in the national office.

"In short, bawal as of now,, kay gina-reconsider pa sa central office ang request sa City Council (In short, it is still being prohibited because the central office is still reviewing the request of the City Council)," Dy told reporters in an interview after the flag raising ceremony at the City Hall of Davao.

The LTO head, however, clarified that the issued memorandum states that the prohibition is only applicable to pickup-type vehicles allowing passengers to occupy at the space that is intended for cargo and freight.

"Ang naa lang man gud sa balaod is only laborers, dili passengers. Bawal gihapon pasakyan sa likod, except sa watcher sa cargo or mga laborers nga naa ilang mga gamit sa likod. Pero kung gihimo na siyang pampasahero, bawal na (The directive exempts the laborers or cargo watchers who will be riding at the back part of the pickup. But if the vehicle is being used to transport passengers then it is already prohibited)," Dy said.

He made the clarification after receiving mixed reactions from motorists and netizens who claim that the policy is "anti-poor."

Baluran, in a previous interview, said the "obsolete" policy, which was implemented without prior consultation, even has a stiff penalty.

Dy admitted that they still struggle to determine the passengers at the back whether they are cargo watchers/laborers or mere passengers. But he said they had noted few apprehensions, citing that most of the people are aware of the directive.

He also said there are exemptions, especially in times of disasters and calamities, such as delivering relief goods, but still carrying evacuees are still not allowed.

LTO, last September 18, issued a memorandum circular that strictly prohibits the operation of motor vehicles exceeding the registered passenger capacity and passengers occupying the space of the vehicle intended for cargo and freight.

This was a re-enforcement to Sections 32 and 51 of Republic Act 4136 or the Land Transportation and Traffic Code, enacted in 1964.