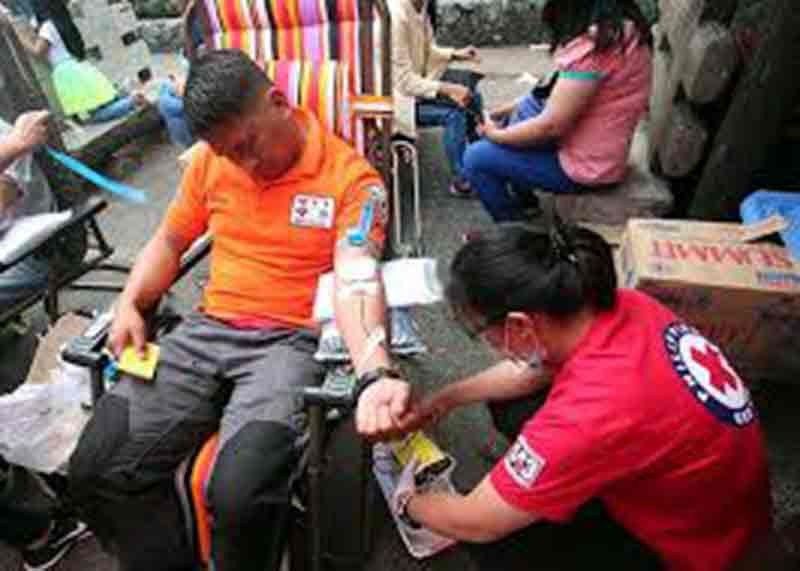 THE Philippine Red Cross-Davao City Chapter (PRC-Davao) has encouraged more Dabawenyos to donate blood to keep up with the number of patients who need blood for their operation or other medical-related concerns, noting the constant demand for blood in Davao region.

Dr. Eduardo Robillo, Philippine Red Cross-Davao City head, said Monday, November 11, that in the Davao region, only about eight to 10 percent of the population donates blood.

The low turnout of blood donors is attributed to some factors. This includes fear of the needle, some are afraid of the mere sight of blood, some have low blood, high blood, has tuberculosis, had malaria, dengue, which are constraints to donating blood.

"That's why, fortunately, Davao is the chapter that processes blood. We examine and process the blood coming from the entire region as far as Mati and Marbel kasi, wala silang laboratory. We need to process the blood first before it is released to be sure na walang defect ang blood now that there is prevalence of Aids," he said.

But he said most of the numbers of donors are from Davao City, as some organizations opted to celebrate their anniversaries with blood donation as one of their activities.

He added that on average, they release around 200 to 300 units of blood every day.

The PRC website lists the benefits of donating blood. Each unit of blood collected, according to the website, is examined for five transfusion-transmissible infectious diseases -- HIV, Malaria, Syphillis, Hepatitis B, and Hepatitis C -- before the blood is transfused to patients. Each needle used in the procedure is sterile and disposed of after a single-use.

The blood donation will help in the production of new blood cells and encourage better bone marrow function. Robillo said donating blood could be likened to changing of car's oil.

"Forever young kasi na re-rejuvinate. The internal are busy in the manufacture of blood parang nag ja-jogging narin sila. The feeling of having saved lives has tremendous effect in your well-being, that's why we really encourage most of the people to donate blood. Unfortunately, less than 10 percent of the population donates blood for so many reasons," he said.

It is not only the Red Cross that has blood donation drive and solicit blood but also the Department of Health.

He said there is always a shortage of blood, that is why they will not stop enticing people to donate to increase their supply and cater to the needs of patients who need blood.

"It's a good thing that the DOH initiated this memorandum of agreement among all the hospitals, DOH, and Red Cross to coordinate this system of donation," he said.

The ordinance states that the barangay shall be responsible for the implementation and maintenance of the VBDP, including but not limited to: donor recruitment, mobile blood donation, trainings and educational campaigns, as well as the following functions.