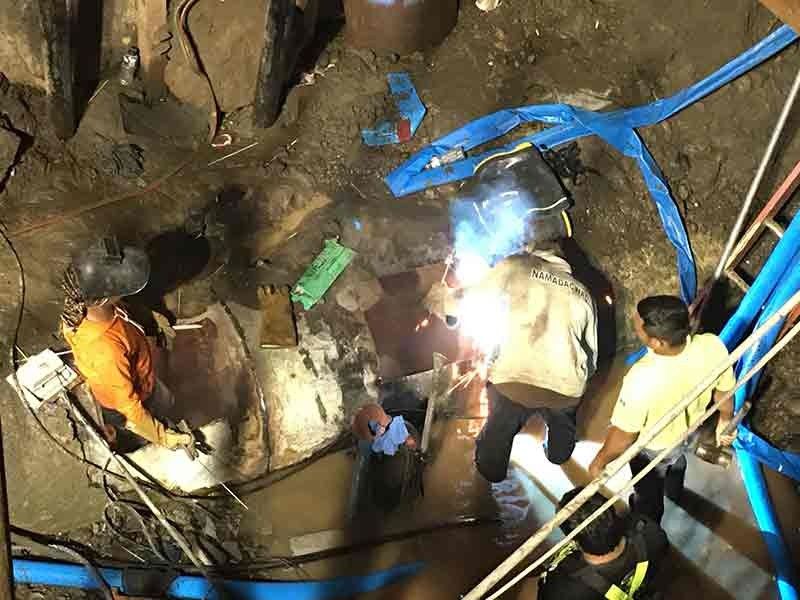 HIGHLY elevated areas in Davao City are still experiencing low to no water supply for almost four days now, as the Davao City Water District (DCWD) is still repairing one of its water transmission pipelines.

DCWD's pipeline was slightly damaged by the recent earthquake that also affected the city.

The water company announced that some areas in the city served by the line 2 of the Dumoy Water Supply System, particularly in some Ma-a areas, Buhangin, Poblacion, Cabantian, and some elevated areas in Lanang, Pampanga, Sasa, and Panacan, will be affected by the repair.

While other parts of the city already had a stable water supply as of today, November 12, highly elevated areas continue to experience low to zero water supply.

DCWD deputy spokesperson Jovana Cresa Duhaylungsod said the management had initially assessed that the repair would only last for at least a day but the condition on site hampered the repair works, particularly the pipeline welding, brought about by the recent rains in the city.

"Some areas in the city, particularly in the elevated portions of Sasa, Pampanga, Lanang, Panacan, and Buhangin, as reported, continue to experience poor water supply especially during peak hours since our water system has not fully recovered," Duhaylungsod told SunStar Davao in a phone interview Monday, November 11.

She said, however, that water supply is projected to be normal in all areas today, November 12.

Meanwhile, she said the crack on the damaged pipe is only less than an inch, but it took them longer time for their repair works due to the problem they had encountered in the site.

She said DCWD, as of Sunday, November 10, immediately delivered water ration to affected areas to mitigate their situation.

At present, she said the water utility firm is continuously monitoring and evaluating other pipelines in the city and only the pipeline in Bangkal has been recommended for repair work.

She said, however, that they are still confirming reported pipeline damage in Quimpo Boulevard.

"Had it been na wala namo to dayon nakita tong 800mm na leaking, nga wala namo siya gi-repair dayon, it could be na mas dako unta to siya og severity in terms of impact sa water supply (Had it been that we were not able to trace the leaking of the 800mm pipeline, the severity in terms of impact of the water supply could have been worse)," Duhaylungsod said.

She also said DCWD immediately conducts inspection every after a calamity the city experiences as part of their standard operating procedure.

The official said that unlike in other parts of Mindanao, DCWD has 10 segmented water supply systems, which lessen the impact of water interruption in case a certain transmission system is damaged.

"If naay damage na mahitabo, dili siya ingon nga massive nga tibuok Davao mawad-an og tubig. It could be nga ma-isolate lang siya sa isa ka water system, (If there is a damaged pipeline, it won't greatly impact the whole city, it could be that we can only isolate a certain water system)," Duhaylungsod said.

While she said there is a possibility that there will be another water interruption to assess, and repair if needed, other pipelines in the city, DCWD postponed these plans brought by the impact the water interruption had brought to its consumers over the weekend.