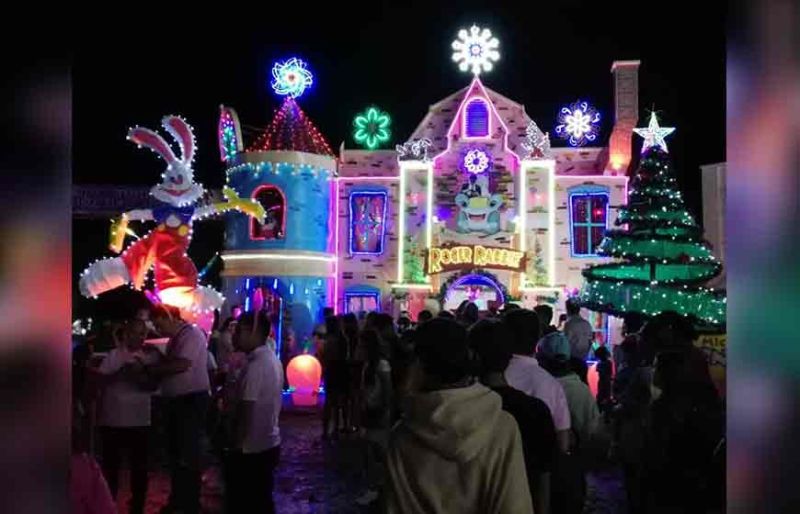 ZAMBOANGA. The Festival of Lights, initiated by the Zamboanga Sibugay Provincial Government, opens Saturday, November 9, 2019. It is now on its third year. Shown in the photo is the entry of the vice governor's office and Provincial Board. (SunStar Zamboanga)

THE Capitol grounds of Zamboanga Sibugay now serves as a nightly attraction, as the Festival of Lights reeled off Saturday, November 9, following the "lights on" ceremony spearheaded by the Provincial Government.

The festival, which is now on its third year, features 13 famous world theme parks with an estimated two million Light Emitting Diode (LED) bulbs lighting up nightly the 5,000 square meters capital grounds in the village of Ipil Heights, Ipil, the province's capital.

Zamboanga Sibugay Governor Wilter Yap Palma said the festival is aimed to showcase the potentials of the province in terms of tourism and investment.

"This is one way of showcasing (the potential) of the province of Zamboanga Sibugay and this is for our people to enjoy not only for Sibugaynons but also for the neighboring provinces," Palma said.

The lights and the theme park structures, which cost some P2 million, were sponsored by the different sectors such as the provincial officials, municipal governments of Diplahan, Buug and R.T. Lim, local cooperatives, contractors' association, chamber of commerce, Zamboanga Sibugay Hospital, Department of Education, and the Department of Public Works and Highways.

Some 20,000 people, including visitors from nearby areas, witnessed the lights on ceremony, which was culminated by a 25-minute fireworks display.

Palma said there will be three stages of judging the entries and announcement of winners is set to be held on December 14 although the Festival of Lights will culminate in February in time for the provincial anniversary celebration.

Meanwhile, Palma said the festival also provide business opportunities to local businessmen from Zamboanga Sibugay and those from other provinces.

He said the businessmen who set up stalls around the Capitol grounds are exempted from fees except that they were required to maintain cleanliness.

They also enjoy free use of electricity and no entrance fee is being collected from visitors, both locals and tourists. (SunStar Zamboanga)