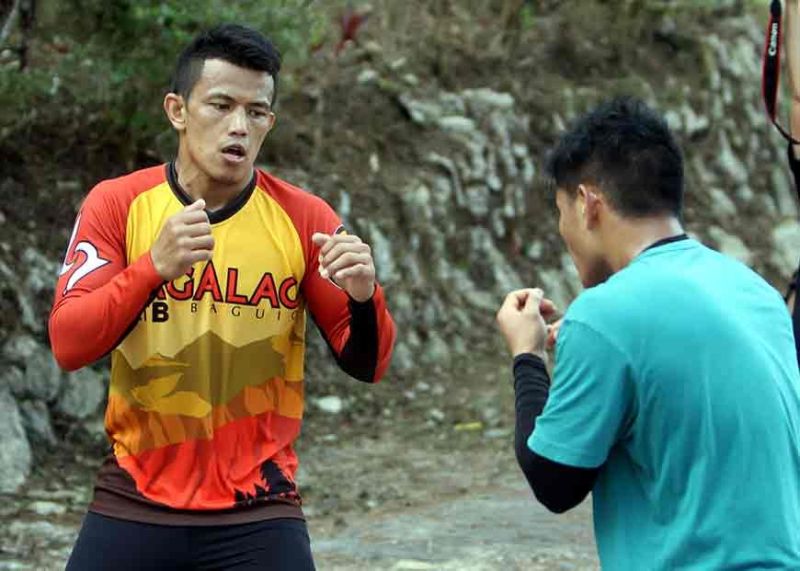 BAGUIO. Edward Kelly holds a morning workout as he prepares against Kai Tang in ONE's November 16 event dubbed Age of Dragons at the Cadillac Arena in Beijing, China. (Roderick Osis)

AFTER three of his Team Lakay brothers reigning supreme in Manila, Edward Kelly hopes to pick up the pace and close out their campaign in One Championship with a bang.

Kelly is once again booked in ONE's November 16 event dubbed Age of Dragons at the Cadillac Arena in Beijing, China.

After failing to get his hands raised the last time following a technical decision loss against Xie Bin at the Mall of Asia arena in August, Kelly seeks to bounce back against China's knock out artist Kai Tang.

Tang is currently riding high on a four fight win streak, all via knock out in his nine wins that includes two losses while Kelly is 2-2 in his last four bouts with an overall record of 12 wins and seven loss.

In the main event, reigning ONE flyweight kickboxing world champion Ilias Ennahachi of the Netherlands will defend his world title against challenger Wang Wenfeng of China.

Also, in the co-main event, Tarik "The Tank" Khbabez of Morocco and Roman Kryklia of Ukraine will do battle for the inaugural ONE Light Heavyweight Kickboxing World Championship.

At just 23 years of age, Ennahachi is already a multiple-time Kickboxing World Champion. He made his resounding ONE Super Series debut last August at ONE: Dreams of Gold, when he dethroned former World Champion Petchdam Petchyindee Academy to capture the ONE flyweight kickboxing world championship.

Ennahachi's first world title defense won't come easy, as he is tasked to take on local martial arts hero, Wan Wenfeng, who will no doubt have the full support of his hometown fans in Beijing.

In the evening's co-main event, the inaugural ONE light heavyweight kickboxing world champion will be crowned when Khbabez meets Kryklia at the center of the ONE Championship ring.

Khbabez, a 2-time Superkombat heavyweight world champion, is known for his aggressive style, and his fast and powerful combinations. The heavy-handed Moroccan striker has been perfect so far in ONE Super Series, winning all four of his bouts impressively.

Khbabez's latest conquest came last June, when he toppled Brazil's Anderson Silva to win by unanimous decision in front of Chinese fans in Shanghai. The victory earned him a spot opposite Kryklia in this world title matchup.

Kryklia, on the other hand, is currently riding an eight-bout winning streak heading into his ONE Super Series debut. He is a former Kunlun Fight World Champion.